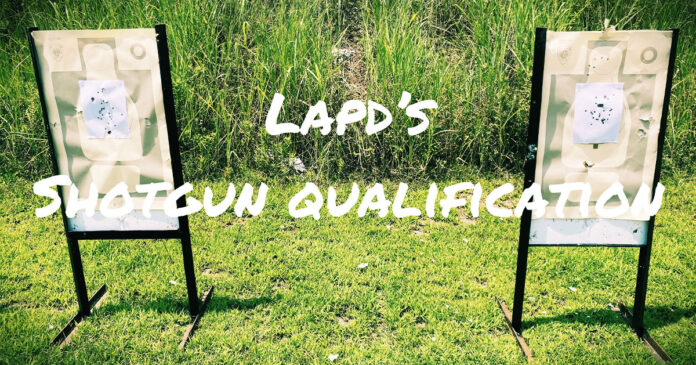 It is difficult to find shooting standards that are relevant for how a shotgun is likely to be used by a non-sworn individual. Police qualification courses generally include skills that are really outside of the use case for the normal person who is using a shotgun to defend their home. I stumbled across LAPD’s shotgun qualification though, and it seems like it may actually be a good fit.

Unlike most other law enforcement qualifications, the LAPD qualification is shot entirely with buckshot, and the distances do not exceed 10 yards. It hits most critical skills for the home defender. Recoil management, single and multiple target engagements, loading the magazine tube under time pressure, and use of cover. The only thing it is really missing is port loads.

The accuracy standard is also better than most other shotgun qualifications. LAPD uses the BT-5 target for qualifications, but only hits inside the 9 and 10 ring count. That is a target area about the size of a piece of standard printer paper (8.5”x11”). While larger than the 8” circle that I personally prefer, it is much better than “anywhere on the target” that many shotgun qualifications use.  It also means if I don’t have any BT-5’s available, I could just use a sheet of printer paper and be close enough.

The course of fire is split up into two phases. Each phase is scored independent of the other, and 70% on each phase is required to pass. At just 10 yards, it should be possible to keep all of the pellets from most buckshot loads inside the 9 ring of a BT-5 target with a well patterning shotgun. If using a buckshot load with Federal’s Flite Control wad or Hornady’s Versa-Tite wad, this should be easy work.

While the time constraints are not very tight, I think they are acceptable for use on a “minimum acceptable standard” type course. Phase 1 allows around 3 seconds per round fired, assuming it takes about 5 seconds to load two rounds into the gun in the middle of the string. Phase 2 is closer to 2 seconds per shot, depending on how quickly someone can get into a kneeling position behind cover. If this is too easy of a pass, a good start would be to shorten Phase 1 by 10 seconds, and each string of fire in Phase 2 by 2 seconds. I took my time on all of the strings of fire to make sure I kept the target clean, and I would have met the reduced time standards.

Someone shooting this course will need to know how their gun patterns with the buckshot load they are using. I used Estate 00 buckshot out of an improved cylinder choke and had plenty of margin to keep the whole pattern inside the scoring zone. A cylinder bore gun would have made it quite a bit more difficult. Of course, using something like Federal Flite Control would be easy mode.

If you have a range that can accommodate it, I think this is a good baseline course of fire to assess where someone might be as a shotgun shooter. At only 12 rounds, it is relatively cheap to shoot. If you give it a try, let us know how you do in the comments.