The Compact Grip: Shooting Pistols with a Compromised Grasp

Pistols with small grips prove significantly easier to conceal but they are harder to shoot well. These tips can help close the performance gap. 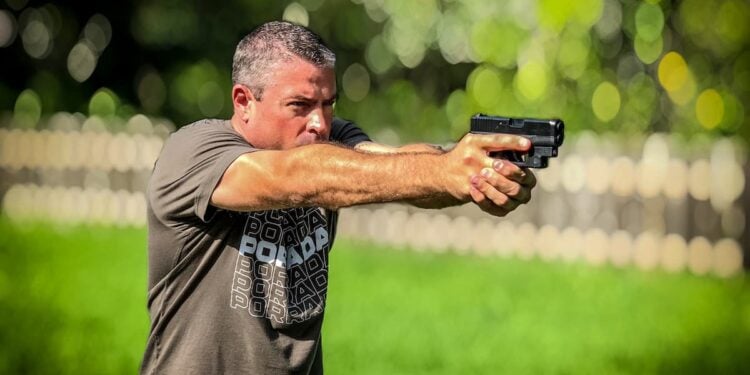 Everyone who spends a significant amount of time carrying a concealed firearm will eventually figure out what works for them and what does not. Those who consistently carry may find that they never get it exactly right and will continue to try different holsters, guns, and other associated gear.

For many of us there is an ongoing battle for compromise between carrying a serious gun, yet carrying a defensive weapon that you can discreetly conceal. All body types are different, certain carry methods work better for certain people than for others, and each concludes how much printing they will tolerate.

In my experience, the hardest part of the concealed handgun to conceal is the heal and toe of the grip, and this tends to be the experience of many concealed carriers. This being the case, guns with short grips tend to conceal imminently better than those with full-size grips. The downside: handguns with compact grip lengths are harder to shoot and handle.

Over the past few years, I have found that the optimal concealment option for myself is handguns of the sub-compact variety that have a reduced grip length when using the flush fit magazine option. Such guns are amazingly popular with most notable manufacturers producing scaled down versions of the full-size pistol models in their lineup.

The irony, however, is that I find most folks who use these compact models typically take advantage of the magazines that provided extended base pads in order to provide what is essentially a full grip on the handgun. While these compact or subcompact models usually prove smaller than the full-size gun even with these grip extensions, I personally find that the employment of such grip extensions begins to negate the entire concealment benefit of the compact gun. Most people are not comfortable shooting a handgun with their pinky finger dangling under the grip, however, so the compact gun with grip extension remains commonplace.

I have come to the conclusion that for myself, personally, the best concealed carry option for my daily life is a compact autoloader with a reduced size grip, my primary carry gun being a Glock 26. This handgun is quite small, yet the Glock 26 can accept the full-size magazines from the rest of the Glock 9mm lineup. This gives such a compact version of a pistol a lot of versatility: the gun can be carried in the smallest possible format but a full-size reload can be carried for it. While there is a whole slew of available factory and after-market grip extension options for the Glock 26 I do not use any of them and instead carry the gun with the flush fit magazine. This means that I shoot the gun with my pinky finger riding under the grip. For myself, this is a compromise worth making for the much better concealment.

So, the question becomes, how much shootability do we give up when we embrace a short grip?

The reality is this: you will indeed sacrifice some performance when you shoot a handgun that provides only a three-fingered grip as compared to a full-size grip, all else being equal.

However, with proper technique, such guns can be shot very well. Whether the compromise is worth it comes down to personal opinion, but shooters often form such an opinion without a working knowledge of how to maximize their shooting ability with a short grip. Let’s speak to the techniques involved in maximizing our ability to shoot with a three-fingered grasp.

Elements That a Reduced Grip Will Negatively Impact

First, your ability to control the weapon’s recoil will be more difficult. Second, the ability to establish a good grip rapidly when drawing the gun is harder to accomplish. Third, reloading the handgun becomes more problematic. Also, a handgun with a reduced grip length can tend to squirm around in your hand more than a full-size gun, although this particular problem factors into the recoil control issue. Realistically, the reduced grip length will make all of these elements of shooting and gun handling more challenging, but the performance gap can be greatly reduced with proper technique and training.

When shooting a handgun with a reduced grip that leaves your pinky without a gripping surface you can get further control of the gun by tucking the pinky under and against the bottom of the grip. This adds contact surface to the gun and it also works to sympathetically strengthen the hand’s entire gasp on the gun as opposed to dangling the pinky as you may while holding a teacup.

This mechanic of applying contact and pressure against the bottom of the grip with the pinky finger goes a long way towards making up the missing grip surface. While this technique does not entirely replace the enhanced control of a full grasp, it does significantly improve control of a small handgun and aid in rapid follow-up shots.

Also, while the small gun does inevitably leave a compromised amount of surface contact with the weapon on the part of the dominant hand, the support hand is often relatively unaffected. A very solid grasp on the gun with the support hand also goes far in mitigating the recoil.

In terms of getting a good grip on the gun from the holster, the smaller grip is indeed more challenging. The compact grip is both a smaller surface to grasp, thus making it more precarious, and it is also a smaller target to quickly hit on the draw. Something that goes a long way in helping mitigate this is to ensure that you have a stable holster platform. Many holsters tend to shift around while in the waistband, thus making the exact location and angle of the handgun’s grip unpredictable in position. A holster that anchors to the belt at two points instead of one, such as a hybrid design, stabilizes the tilt of the gun while riding in the belt line. If you are not a fan of hybrid holsters, then look for a design that utilizes two anchor points with dual loops or clips. These tend to minimize the tilt of the gun throughout your daily activity, thus making the exact location of the grip predictable.

A further option that can always be leveraged when using a reduced grip is to add traction to the grip that otherwise may be unneeded when using a full-size pistol. Skateboard tape, or even a customized stippling job, may be an addition to the smaller gun that will minimize the challenges otherwise encountered when shooting pistols with reduced grip-length.

The compact and sub-compact pistols that are ideally suited for concealed carry remain exceedingly popular as they are certainly easier to carry discretely than are full-size service pistols. If you deem the use of a gun with a compact grip more appropriate for your carry needs but remain apprehensive about your ability to shoot it well, try some of these suggestions to see if you can find a good compromise between performance and concealment.

Do You Need an Active Retention Holster?