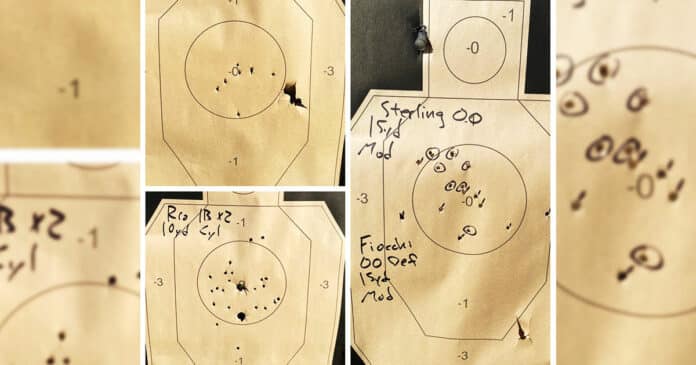 We all know that we need to pattern our shotguns. Or at least I hope we all know that. Once patterned, though, what does it all really mean? Where are lines drawn, and how large of a pattern is too large?

My personal opinion is that once a pattern gets to 8”-10”, that is about the practical, effective range of that pattern. The average shoulder width of an adult male in the United States is 16”. Chop a few inches off to allow for the arms, and we are probably looking at 10”-12” across the chest of an adult male at the most. Assuming we place that 10” pattern dead center, we are just staying on target. This is all just one person’s opinion, though. Let’s consider what the real experts have said.

At Gunsite (you know, the place that really kicked off the whole modern firearms training industry), they break patterns down into zones. There are three zones, an A, B, and C. The zones are not defined by specific ranges but rather what your buckshot load is doing and the corresponding ranges. This is important to understand because certain loads, or certain shotgun modifications, will change these zones.

The A zone is the distance at which the buckshot load basically looks like a single projectile on the target. A typical 00 buck load out of a typical cylinder bore shotgun is probably somewhere from 0 yards to 3 or 4 yards. If we start using chokes or loads that use more advanced wad technology like Federal’s Flite Control or Hornady’s Versa-Tite wads, the A zone will get larger. With Federal LE133 00, it probably goes out to 8-10 yards.

Next would be the B zone. This is the distance at which we start to see an actual pattern on the target, out to about chest-sized pattern. Depending on load selection and shotgun used, this is usually around 5 yards out to 15-20 yards. Better loads will obviously extend this zone out to as much as 30 or 40 yards.

According to the guys at Gunsite, the B zone is the shotgun’s sweet spot. It is in this zone that it is most effective. The target is receiving multiple simultaneous hits spread out a little. This tends to overwhelm the target and gets us the result we need in the shortest time frame possible.

If you are good at noticing patterns (pun intended), you will know that next is the C zone. This is the distance at which we start giving up some of our pellets off the target. Buckshot could be made to work here if there wasn’t another option, but throwing a slug in the gun is probably the better idea. We might also call this the ragged edge of our practical usefulness envelope. Usually, this line gets drawn at about 20-25 yards. Again, load selection and shotgun used can stretch this as far as 40 or even 50 yards.

What Does it Really All Mean?

So how well does your shotgun need to pattern with the load you have selected? Well, that all depends. If the mission truly drives the gear train, then define your mission and see what your circumstances require. I live in a small house; my furthest shot inside the house is about 10 yards. I could get away with a load that puts that 10 yards in the B zone and within my own comfort level. That opens up my options. If you need more practical range or want as much versatility as possible, you will need to use a better load like a Flite Control or Versa-Tite load or have features on your gun that allow you to shoot a tighter pattern. Either choke tubes or specialized barrel modifications (Vang Comp, et al.).

This can be the tricky part though, the usefulness of the pattern is determined by the size of the pattern and the size of the target. All of this is based on the assumption that we are shooting at an unobstructed target square to us. I am not certain that is something to rely on, so we have to determine the usefulness of our pattern within the context of what we are shooting at that moment.

This is why people generally say a tighter pattern is better. An 8” pattern at 10 yards is fine if the target is squared up, but what if the target isn’t? Or what if I only have a small sliver of the target available because it is hiding behind something. In those instances, smaller patterns are easier to use because we are responsible for everything that leaves the gun’s muzzle. We don’t need to be throwing pellets.

The moral of the story is that you need to pattern your gun at the distances you are likely to use. Take notes, crack that code, and then commit it to memory, so you know how to best leverage your shotgun’s performance with your buckshot load. Or maybe, to realize that the shotgun, as you have it currently configured, is not the best solution. Do the work.