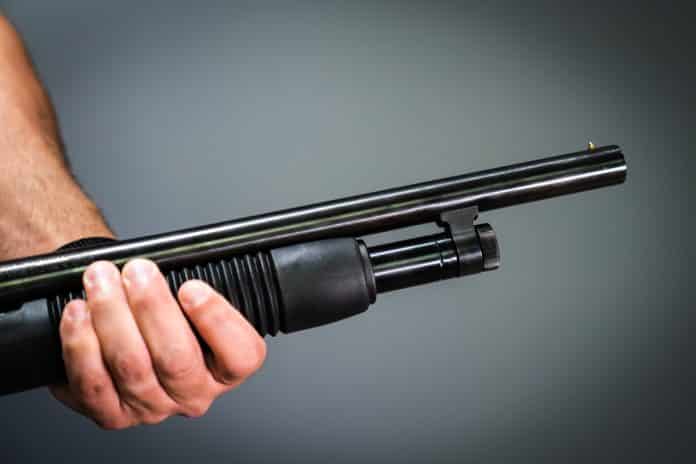 Yes, an AR or AK can certainly defend against threats, but shotguns are better for home defense. In fact, shotguns are the best long gun in terms of what you can do with one for the most part.

How come? Let’s run that down.

Clint Smith from Thunder Ranch is fond of saying something like “pistols put bullets IN people, and rifles put bullets THROUGH people…but shotguns, with the right load and right range, remove chunks of people.” If you want a long gun for home defense or as a trunk gun, a shotgun is arguably a better choice than an intermediate rifle.

Granted, there are potential dangers used in the tight confines of the home. Buckshot and other loads will go through walls like a hot knife through butter, but the same is true for rifle and pistol rounds. When properly aimed, however, the potential for overpenetration is reduced compared to rifle rounds.

At home defense ranges, buckshot is still clustered tightly. At 10 to 15 yards, the pattern is less than two inches across in most cases. That’s a big hole to put in someone. Since you don’t need to worry about a rifled barrel at that range, a slug will do likewise.

IF, of course, it’s aimed accurately.

Most Stopping Power Short Of An Elephant Gun

Stopping power is mostly a myth, short of dangerous game rounds. A .338 Winchester Magnum has stopping power. A .45-70 will do for most living things on earth. The only thing a .460 Weatherby can’t kill is a dinosaur.

If you have any inclination towards a bigger bore or more powerful cartridge, shotguns reign supreme short of magnum rifles.

That’s a lot of lead. If you think there’s any credence to the idea to heavier bullets being better for stopping things, a shotgun is an ideal platform for defensive purposes.

More Bang For The Bucks Does Not Exist

Shotguns are the most versatile guns there are. There is no shooting sport they cannot do short of anything that takes place at long range.

Not only that, you can get a good one for cheap. Remington 870s are everywhere; Mossberg 500s are too. If you want to get a tactical model and add a light, you can easily find a defense model for not much more than the base model or just upgrade the furniture.

While the best SHTF gun is the one you run best, frankly a pump-action is one of the best choices. With a bit of care, they last decades and run reliably. You can hunt a lot of different game, from squirrels to birds to big game if you get close enough and have the correct ammunition.

In terms of use, the manual of arms is about as simple as it gets. Pattern your load at defense distances (the longest stretch of space in your house, maybe 10 to 15 yards), and you’ll get your point of impact. At that point, get to work learning how to run the thing.

So, it’s a proven effective self-defense weapon. They aren’t expensive to pick up, and it isn’t difficult to learn how to run them. If you want a long gun for home defense…it’d be tough to get much better.