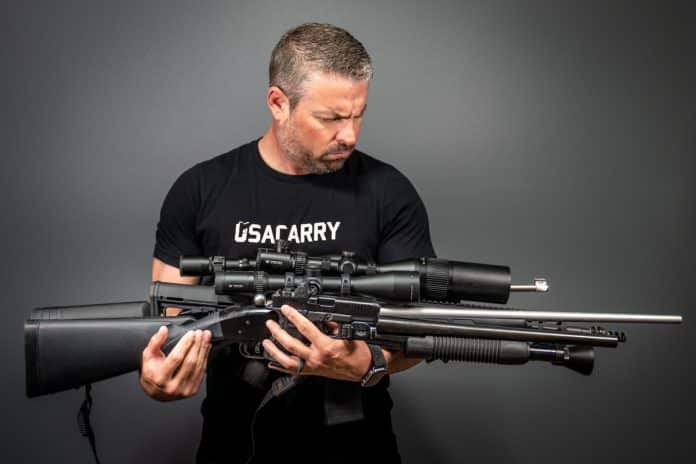 What is the one gun to have in an SHTF scenario if you could only have one?

And perhaps just as importantly, what is the point to asking this question to begin with?

Even though no one gun can be used for everything, it may very well be that you’ll only have one gun in the event of a major catastrophe, such as a natural disaster or an EMP attack.

Needless to say, you will be wise to prepare yourself for the possibility of only having one firearm for when the grid goes down. If that happens, what is the best make and model of gun that you can have?

We’re going to answer that question in this article.

What Do Other People Say?

If you ask anybody the question ‘what is the best gun you can have in an SHTF scenario?’, you are going to see a large variety of answers.

Some will say the best gun to have is a shotgun, due to the fact that you have a variety of different ammunition choices for it: you can use birdshot for small game hunting, slugs for big game hunting (within moderate distances), and buckshot for personal defense.

Others will say the best gun to have is a mid-sized 9mm pistol with a higher magazine capacity such as the Glock 19, as such a weapon is easily concealable while also offering you plenty of firepower.

Yet others will say the best to have is a rifle that will allow you to go hunting if necessary and tap targets at long distances.

So, which of these answers is correct?

But here’s the honest answer: the single best gun to have in an SHTF scenario if you can only have one, is the gun that you are the most proficient and comfortable with.

That’s it. It really is that simple.

There’s really no need to worry about all of these different ‘factors’ or what people tell you. Plain and simple, the one gun that you are the most comfortable and proficient with shooting is the one gun that will be the most important to have in an SHTF scenario, and

Again, no one gun can be used for anything. A Winchester Model 70 would be great for big game hunting or anti-personnel use at long distances, but nearly impossible to use for concealed carry. All the same, a handgun such as the 1911 could easily be used for concealment but would likewise not be a good option for long distance shooting.

That’s why it’s important to try and have different guns in your arsenal that can fulfill various applications. But again, this may not be possible, especially if you’re cut off from your gun safe at home when disaster hits or if you’re in the early stages of building your arsenal.

The best gun to have is the gun you are the most comfortable and proficient with.

Is That Really Wise?

It’s perfectly understandable if you question the logic behind the statement of ‘the gun you are the most comfortable with is the best gun to have in an SHTF scenario.’

Vice versa, opting for a rifle for defending yourself in a more rural environment or a homestead would be wiser than a shorter range weapon.

You get the idea. Think about your situation, your scenario, and your circumstances, and then select the weapon that will best fit your needs based on those conditions and that you are entirely comfortable shooting.

How Can You Cover Your Bases?

Again, no one gun is going to cover all of your bases, which is why, if possible, you should have more than one gun in an SHTF situation to fulfill different roles.

And the good news is you don’t need to have an entire room filled with weapons to have your bases covered.

In fact, if you have just five specific types of weapons in your arsenal you should be good to go:

With firearms in the above categories in your possession, and assuming that you are trained in the use of those weapons, you should be good to go.

In conclusion, as part of your preparations for an SHTF scenario, it will be important to have multiple firearms that can perform different roles.

If you could only have one gun in an SHTF scenario, which one would you choose?