The Sig P250 isn’t a gun many people think about anymore. When first introduced, it had its fair share of teething problems. Sig eventually came out with a second generation version (although it wasn’t called that), that fixed a lot of the problems. You can tell the difference between the first generation and second generation of 250s by the grip module included (assuming it is the original grip module). Even though the P250’s problems were basically fixed, it just wasn’t meant to be, and the P250 ceased to be a gun Sig made. This is the age of the striker, and anything else has a tough uphill battle to fight, unfortunately. Now the P250 is relegated to the used blaster bin, where when found, they can be had for around $300 give or take a few Alexander Hamiltons.

If you aren’t familiar with the P250, one of the things that made it not so popular is that it is a Double Action Only (DAO) hammer fired gun. In the case of the P250, this translates to a long, but actually pretty light, trigger press. Basically, like a revolver, except lighter. Sadly, this is a striker fired world now, and the market obsesses over shorter, lighter, crisper trigger presses. Proof of that is in the P320. The SIG P320 is essentially a striker fired P250, and it sells like hotcakes. Really, that is probably what did the P250 in.

The only other oddball feature of the P250 is the rear sight. It is not only the rear sight but also the retaining plate for the firing pin and everything else in the slide. This means the only people making rear sights for the P250 is Sig. Want anything other than some sort of three-dot sight setup? Sorry, it doesn’t exist. Personally, I find that incredibly annoying, as I am sure many other shooters do too.

So accepting that the P250 has a trigger that the market doesn’t desire, and a funky rear sight set up, is it still a decent gun? Based on my experience, I would basically say yes. The sample I have is a P250 compact, basically the size of a Glock 19. Reliability wise, my sample has run without issue for the most part. It was not a fan of steel cased Wolf ammunition and had a hard time getting reliable ignition. Everything else, though, which has included a mix of Winchester white box, Blazer Aluminum, Browning FMJ, Speer Gold Dot, Federal HST, Sig V-Crown, and Hornady Critical Duty, it ran fine. It checks out from a reliability standpoint, which is really at the top of the list for things that matter.

Accuracy wise, the P250 took some getting used to. This is where we start to have to manage some of the quirks of having a funky rear sight. Sigs usually come from the factory with what is oftentimes called a “combat” sight picture, or a “drive the dot” sight picture. This means that for whatever distance the gun is zeroed for, the point of impact is where the dot on the front sight is located. If I am aiming at a target, where the dot is when the gun fires is where the bullet should land. Unfortunately, this is not my preferred sighting method. 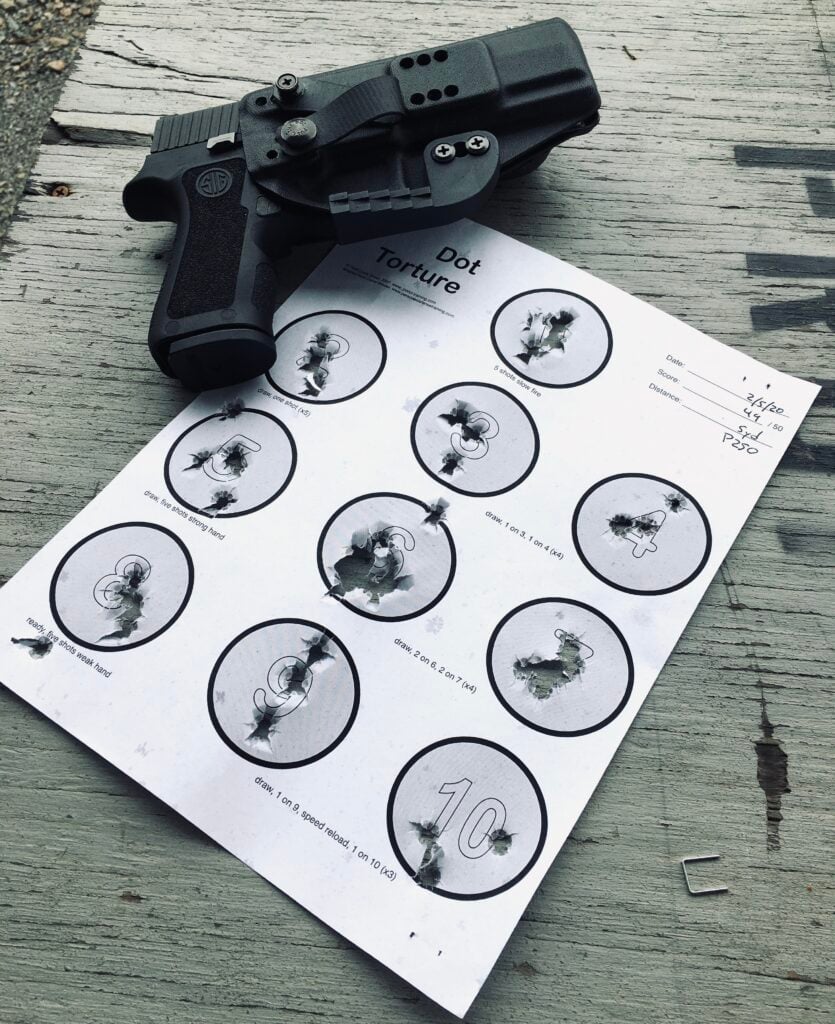 Even though I could shoot nice groups at 25 yards with the P250, it took some work to get them to land where I wanted them to. My preference would be to change the sights all together to get the point of impact I prefer, but since the P250 has that funky rear sight, options are limited, and they require some math to figure what the proper sight height would be to get the point of impact I would prefer. Not quite as straight forward as just buying a whole new set of sights.

The ergonomics of the P250 are essentially the same as the P320. Honestly, I am not a huge fan of the standard P250/320 grip module. I think it needs more aggressive texture and think it can just be done better. Fortunately, so did Sig, and they created the X-frame. The grip modules intended for the P320 will still fit the P250 fire control unit. Sig’s X-frame is a brilliant piece of plastic and was a quick upgrade for the P250. It is, however, necessary to be aware that the X-frame does not fit the old style of magazine base plate. So it may be necessary to modify older base plates or buy the new ones to fit the X-frame. Still worth it. The P250 would also any of the Grey Guns or Wilson Combat grip modules too.

Is DAO Really That Bad?

So, back to that DAO thing. Does the DAO trigger really hold us back from a performance standpoint? Obviously, in terms of accuracy, it doesn’t. Perhaps it is the time I spent shooting revolvers, but the DAO trigger does not in my experience, make it more difficult to shoot accurately. Does it slow us down if we are trying to shoot quickly though? Maybe is about the best I can do. I shot the IDPA 5×5 classifier with both the P250, and a Gen 5 Glock 19 on the same day, back to back from the same type of concealment. The difference was not as significant as I expected it to be.

This is not the result I expected to be honest, but I was pleasantly surprised by it. I expected the P250 to be a bit slower on the splits, and over a 25 round “test,” I should see a more significant difference if that were the case. Perhaps on a shorter distance test, where the guns are shot wide open because the accuracy standard is less, I would see more of a difference, but does it really matter if I can pull 0.20 second splits vs. 0.25 or 0.30 second splits? Even if 5 hundredths of a second slower, what does a hammer fired DAO gun give me in return? Without going too far down a rabbit hole, margin.

Double action triggers combined with a hammer fired action give a safety margin that the prevalent striker fired designs cannot. They provide increased tactile and visual feedback of what the gun is doing, and that helps us not make mistakes. That has value. Probably more value than the gun community in general is apt to give it. Is it worth maybe 5 hundredths of a second, I think it is, but ultimately you get to be the judge on that one.

Is the P250 God’s gift to the gun community? Not hardly. It has its quirks. That does not mean is not a viable defensive firearm though. If you have a thing for DAO guns, or want a little extra margin of safety, it might be a good choice. You will have to hunt for one though. Hit the used market for a good deal, and with the X-frame, they are legit blasters.