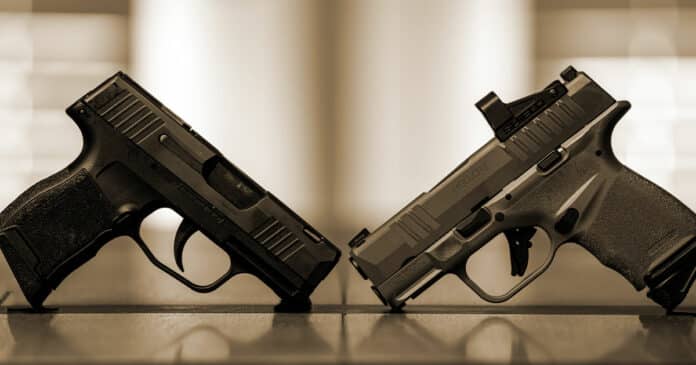 SIG shook up the concealed carry pistol market in 2018 when they released the SIG P365. If you haven’t been hiding under a rock, then you know they were the first to come out with this “modified-doublestack” magazine. Basically, they were able to cram 10 rounds of 9mm into a tiny little package that is the P365.

The next company to release a pistol that could compete with the P365 was Springfield Armory when they released the Hellcat in late 2019. Springfield was able to squeeze in 11 rounds of 9mm.

Well, this morning, SIG sent out the following press release. We’ve seen a few more pistols released that share the micro-compact size with higher capacity since, so I won’t if we will see anything filed against these other companies.

NEWINGTON, N.H., (May 11, 2021) – Today, SIG SAUER, Inc., filed a lawsuit in the United States District Court for the Central District of Illinois, Rock Island Division, alleging that Springfield, Inc. (Springfield Armory) infringes two SIG patents relating to SIG’s P365 magazine.
The P365 has seen tremendous commercial success, due to the innovative design of the high-capacity magazine.  In its complaint, SIG alleges that Springfield Armory’s making and selling of certain “Hellcat” branded magazines infringes upon two SIG patents.  SIG SAUER is seeking injunctive relief, as well as monetary damages for Springfield Armory’s past and ongoing infringement.
Ron Cohen, President and Chief Executive Officer, made the following statement:
“When the SIG SAUER P365 was introduced it took the market by storm as the most innovative high-capacity, micro-compact pistol to be introduced due to its magazine capacity, and quickly became one of the top selling handguns in the market due to this unprecedented innovation.  SIG is not a litigious company, but given the extent of infringement by Springfield, SIG has a responsibility to protect both our intellectual property and the significant investment we make to develop our innovative products.  As a company we are proud to yield more than 100 patents worldwide, with more than 40 patent applications currently pending, and we will protect the extensive research and design that goes into developing these patents rigorously.”

We’ve seen a few more pistols released that share the micro-compact size with higher capacity since.