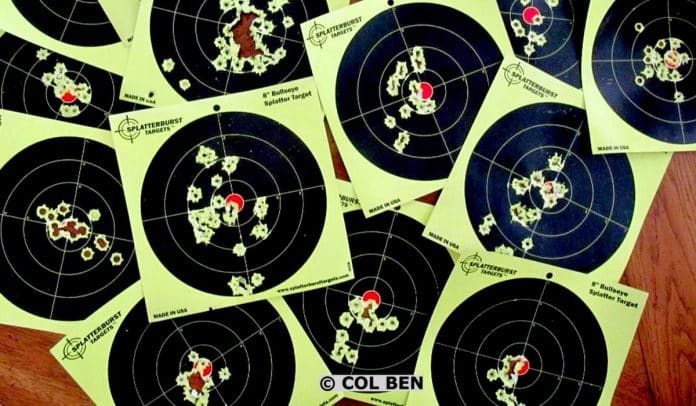 Most shooters know the difference between the Sight Alignment and Sight Picture concepts. Both are very important for aiming and getting hits on target using iron sights. And you should know which Sight Picture Hold works for you and your gun’s iron sights. There are some significant differences between getting your front and rear sights lined up vertically and horizontally (Sight Alignment) and placing those aligned sights on target (Sight Picture.) Note that Sight Alignment procedure remains the same, but the Sight Picture changes from gun-to-gun and from one distance to another. This article focuses on Sight Pictures and concealed carry. I want to review four of the common Sight Picture Holds, clarify them and some related ideas, help you decide which Hold works best for you, and give you my opinions and tips to help improve your aiming and accuracy results for self-defense.

Self-Defense shooting when carrying concealed almost always involves rapid drawing, rapid Sight Picture acquisition, and rapid firing. In deadly-force encounters, time is not on your side, and you rarely have time to properly align sights and get a perfect Sight Picture. But, you may not need perfect Sight Alignment, Sight Picture, and a high level of “precision” in defensive shooting. It is not precise bullseye shooting for tight groups and hits very close together on the target.

Your tactical combat self-defense goal is to quickly and consistently get “accurate” hits someplace on the target to stop the threat, rather than precision hits closely grouped together. These are critical life-or-death situations, and you must stop the attack quickly. Defensive shooters have a great responsibility to get all hits on desired targets and not cause collateral damage to unintended targets. Shooters are responsible and accountable for all bullets that exit their barrels, even deadly stray ones. Recognize that a Flash Sight Picture technique may be used for closeup defensive situations. See my Flash Sight Picture article here.

When shooting, there is a difference between “accuracy” and “precision.” Accuracy, generally, means consistently getting your target hits as close as possible to your desired aimpoint outcome, e.g., the bullseye.

Precision means repeating the same action, and getting the same results, or tight group target hits every time, someplace on the target. Ironically, this can mean not even in or near the bullseye. No matter where they are located on the target, the hits can be scattered across the target, and the close hit group size of precision still exists. For certain precision applications like sniping and hunting at longer distances, iron sights are usually replaced by a telescopic sight or red dot optic. See my previous article, Sight Radius, Accuracy, and Precision in Defensive Shooting here.

TIP: Self-defense tactics and techniques sacrifice a certain amount of accuracy to get hits on target QUICKLY. Close tight and precise group hits are not that necessary to stop the threat in self-defense. However, this does not mean the shooter is not concerned with accuracy, the basics of shooting and marksmanship, and precision.

Iron sights and optical sights are different, since optical red dot sights, for example, must most definitely be directly zeroed to the gun first by the shooter. Optical sights have almost infinite adjustments and must be carefully aligned and zeroed to the gun before shots can be truly accurate with rounds impacting at a given distance. It takes practice using optical red dot sights to first find the dot and then place it on the target where you want the rounds to hit.

Of course, iron sights may also be adjusted and rely on Front Sight Focus. Some say red dot optical sights on handguns are not optimal for short, self-defense, closeup combat distances of 3 to 7 yards with concealed carry handguns, but this is very controversial. Certainly, much practice is necessary to use red dots for desired results in deadly-force situations. And there is a difference between focusing on the front sight with iron sights and finding the dot and placing it on the target with red dots. See my previous article, Handgun Mini Red Dot Sights: Basic Considerations and Opinions here.

Although iron sights, like optical sights, are adjustable, it is usually best practice to NOT adjust them initially with a new factory handgun, until the shooter has mastered the fundamentals of marksmanship. Often I have seen new shooters with new handguns, adjust and tinker with their new iron sights and have bad results with very poorly adjusted iron sights. So, first get the shooting basics down by taking a very good fundamentals class and regularly practicing, since poor hits with a new handgun are usually caused by poor shooting fundamentals, rather than by the sights and a new gun.

My experiences tell me that a large majority, but not all, handguns from all reputable manufacturers have their iron sights tested and properly adjusted from the factory and initially hit where properly aimed. The new handgun and sights are usually more accurate than the individual new shooter. However, many iron sights are designed to be adjustable for sighting in guns by adjusting the sights for elevation and windage. Several handguns have an adjustable rear sight. Shooters can use their gun’s front and/or rear sight to change target impact of the bullet. This is done by adjusting either the front or rear sight. It involves moving either the front or rear sight Up or Down or Left or Right.

Sir Isaac Newton introduced his Theory of Gravitation in the 1680s, and his three physics laws are true today. The idea is that gravity is a predictable force that acts on all matter, including bullets fired from a pistol, and is a function of mass, distance, and speed. An example of his first law is that every object (e.g., bullet) will remain in a uniform motion or constant velocity in a straight line, but will eventually move downward and stop due to gravity, inertia, and friction.

So accuracy shooters need to keep in mind that their fired bullet will slow down rapidly and drop downward at a certain distance. A long-distance shot will hit the target lower than aimed. Shooters need to know APPROXIMATELY how much of a bullet drop to expect at varying distances from the ammo they use. It varies considerably depending on gun, caliber, distance, muzzle energy, velocity, and ammo, etc. Gravity will vertically pull the bullet down. Pistol bullet drop is GENERALLY about .01 inch at 20 yards, but this varies greatly. Keep this concept and distance variable in mind when zeroing a gun’s sights and shooting for accuracy.

Recognize that with all Sight Picture Holds with iron sights and handguns, the shooter must first clearly see and focus on the front sight and its crisp top edge with proper Sight Alignment, rather than the target. Since the eye can only focus clearly on ONE thing at different distances, the front sight is the point of focus with iron sights. If shooters can see the target clearly, they cannot concurrently see the front sight clearly. After Sight Alignment, then Sight Picture Hold must be mastered. There are several types of Holds. Remember, manufacturers design and build-in their Hold for various guns. But, shooters can decide which Hold is best for themself and adopt it.

The front sight is positioned directly on the center of the target or bullseye, bisecting the target vertically and horizontally. A shooter who has problems with elevation shots in various light conditions may benefit from this Hold. 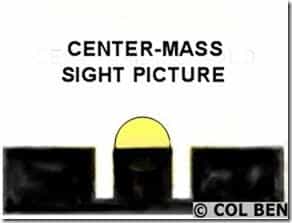 Sight acquisition may be faster. Also, for handguns, it is used for longer distance targets out to 100 yards or so. Sig Sauer production pistols and Glock pistols, for example, are set at the factory for a Combat Hold. 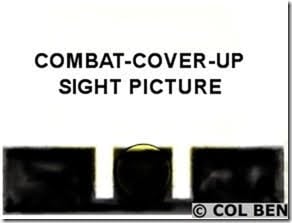 TIP: Iron dot sights are usually designed for a Combat Sight Picture Hold, but Sight Pictures are designed, and built-in to guns by manufacturers and vary considerably.  So, refer to the Owner’s Manual or manufacturer for gun operation, Sight Picture, and properly zeroing sights.

The front sight is positioned directly underneath at the bottom of the target or bullseye and still on it and at the 6 o’clock position like the hand on a clock and centered horizontally. Sometimes this is called the “Pumpkin on a Stick” hold. This Hold allows precision placement of the front sight in the black aiming area of the target for several shooters. 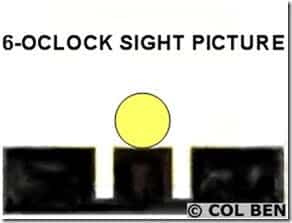 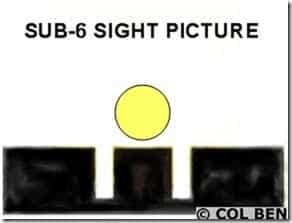 TIP: No matter which Sight Picture Hold is designed into your gun by a manufacturer, a shooter can decide which Hold works best for themself. Deciding which Sight Picture Hold works best involves a considerable “trial and error” process, with frequent trails of careful aiming, noting where shots impact the target, where bullet drop occurs, and making desired adjustments. It is a matter of the situation and choice. I usually test my concealed carry guns and Holds at standard self-defense distances of 7 and 10 yards.

I hope this basic review of the types of Sight Picture Holds and influencing factors for concealed carry help you. You may not need perfect Sight Alignment, Sight Picture, and a high level of “precision” in defensive shooting. Concealed carry self-defense tactical shooting is not precise bullseye shooting for tight groups and hits very close together on the target.

Your tactical combat goal is to quickly and consistently get “accurate” hits someplace on the target to stop the threat, rather than precision hits closely grouped together. Recognize that there is a difference between focusing on the front sight with iron sights and finding the dot and placing it on the target with red dot sights.

A large majority of handguns from all reputable manufacturers have their iron sights tested and properly adjusted from the factory and initially hit where properly aimed. The new handgun and sights are usually more accurate than the individual new shooter. However, many iron sights are designed to be adjustable for sighting in guns by adjusting the sights for elevation and windage.

Shooters need to keep in mind that their fired bullet will slow down rapidly and drop downward at a certain distance. A long-distance shot will hit the target lower than aimed, and shooters need to plan for that.

There are four basic types of Sight Picture Holds, and they vary significantly from one handgun model to another. Manufacturers build in the gun’s Sight Picture Hold, so know the Hold for your specific handgun. Each shooter can decide which Hold they prefer through trial and error and learning where bullets impact the target… and can manually change to their preferred Hold.

Continued Success and be Safe!

© 2020 Col Benjamin Findley. All Rights Reserved. This article may not be reprinted or reproduced in whole or in part by mechanical means, photocopying, electronic reproduction, scanning, or any other means without prior written permission. For copyright information, contact Col Ben Findley at ColBFF@gmail.com.