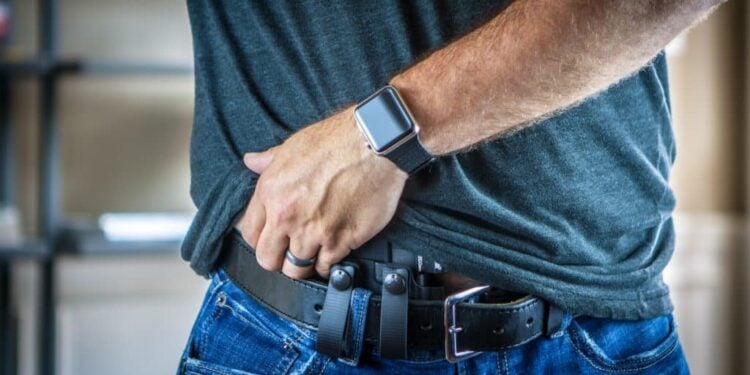 Being able to not only shoot the handgun but also operate its different functions with a single hand is considered a more advanced skill set by most. The modern technique of pistol shooting, as founded by Jeff Cooper, ushered in the almost universal embrace of shooting the handgun with both hands on the gun whenever possible. There are obvious reasons for this as two hands facilitate faster target acquisition and superior recoil control. However, if we analyze actual defensive shooting incidents, we find that people perform a large percentage of defensive gun uses with single hand shooting.

A lesser considered possibility, however, is the potential need to operate the handgun with only a single hand to reload or clear a malfunction.

Some things to consider:

Drawing the Gun with a Single Hand

The most likely task that may need to be accomplished one-handed in a fight is actually accessing the gun. If your primary hand is free to do this then little should change beyond your routine draw, which you should indeed practice often.

However, things become more complicated if you must access the gun with your support hand. Drawing your weapon with your support hand is something that is worth some consideration, and you should try different methods for doing so. Practice this dry only, no live ammunition, at least until you thoroughly test and vet your method.

Carrying a gun in the appendix position can offer an advantage here. But you can still access the firearm on the strong-side hip with the support hand if you must.

You will quickly find that pocket carry is very limited in this regard. Accessing the opposite side pocket is next to impossible.

When wearing a gun on the opposite side of your body from the support hand, you must withdraw the weapon from the holster, but also turn the orientation of the gun so that you can acquire a shooting grip.

As you can imagine, practicing either move is risky with a loaded weapon. So my advice is to practice these maneuvers with dry fire. Obviously, if you need to do this in a lethal encounter, the need outweighs the risk. For practice, however, dry fire is recommended and will facilitate the required training to become proficient with the movement.

Clearing Malfunctions with a Single Hand

Clearing malfunctions with one hand become significantly more challenging. To clear most malfunctions in an autoloading handgun, one must be able to rack the slide. For this reason, I like a rear sight that provides a sharp angle, rather than a slant, that will grab onto your belt, clothing, or other objects to facilitate racking the slide with a single hand.

To clear the most common malfunctions, you can complete a tap-rack malfunction clearance with a single hand by tapping the magazine against your knee or leg and then running the slide off of your belt by catching the belt with the rear sight. Again, you can practice all such manipulations safely with dry fire.

Reloading with a Single Hand

Obviously, reloading the handgun with only a single hand is far more challenging than doing so with both hands. The most significant complication is the fact that you will need to release the handgun to do this operation. There are some places you can put the gun to utilize your single available hand to access your spare magazine.

One option is to put the gun back in the holster. Doing this is more viable if your only functioning hand is your dominant hand. Doing so may consume a lot of time, especially considering that your concealing garment is probably covering your holster. A second option is to place the empty gun in your waistband. You can also put the gun between your knees or in the crook of a bent knee. Either of these options, however, requires that you are stationary while doing so.

With the empty gun placed in its temporary location, retrieve the spare magazine with your single hand. Then insert it into the magazine well of the gun. If your slide has locked to the rear, then you can operate the slide stop with your thumb or trigger finger. Or you can just run the slide off of your belt, which may be the most efficient method. The single-hand reload may lead you to consider where you actually carry your spare magazine.

These less-often considered elements of your training and gear setup are all worth some attention. The single most pressing one-handed skill, obviously, is being able to draw and shoot with a single hand.

However, a working knowledge of how to clear a malfunction and even reload a handgun with only one hand makes for a versatile skill set. Give it some thought and if you practice these skills, be sure to do so safely.