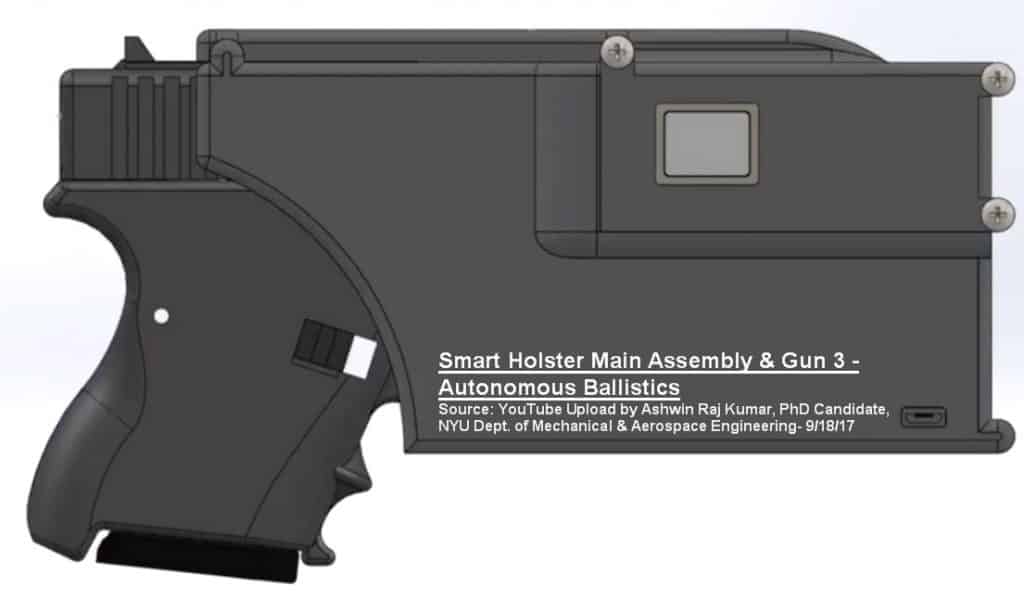 What roles do tools like handguns and their related equipment, like holsters, play in injuries and deaths by guns? Can a gun and/or a holster by their very design and existence prevent deaths related to guns and help gun safety? What is the relationship between the weapon as a tool and its accessories (e.g. a holster) and the cause and prevention of accidental or deliberate shootings and resulting deaths? Many believe that a gun by itself without human intervention or a holster by its design alone cannot prevent them. A gun’s trigger must be pressed by someone or something to function. This is an involved and hotly-debated subject.

There are strong emotions surrounding gun violence and gun control. There have been several attempts and as many failures when it comes to designing a handgun that could be more safe. Safe for both the user and the public. The same applies to holsters. For several years, there have existed electronic devices, sturdy safes, biometric technology, identification chips, fingerprint scanner devices, fingerprint trigger locks, etc. for this. Even “Smart Gun” technology could be an option, as some suggest. These “smart” personalized handguns and/or holsters are generally designed to work solely for the authorized user through features like fingerprint recognition or electronic sensors. But, recent experiences have shown a failure with these Smart Guns because of their lack of reliability, inherent mechanical complexities and failures, lengthy time to activate, vulnerability to hacking, inferior marksmanship results, direct creation of safety hazards, and that their mechanisms can be easily compromised, some with even a small home magnet as someone recently demonstrated.

Recently, there was a Smart Gun Design Competition in Brooklyn, NY with the goal of “Brooklyn leading in the fundamental challenge to public safety and having an impact on tens of thousands of preventable injuries and deaths every year,” said Brooklyn Burough President Eric L. Adams. The prize was a $1 million award. The competition was held in collaboration with the Mayor’s Office of Criminal Justice’s Office to Prevent Gun Violence, New Yorkers Against Gun Violence, the Smart Tech Challenge Foundation, and Strategic Operational Solutions, Inc. The above collaborators, in addition to Burrough President Adams, a former police officer, served as Judges.

But, it is very interesting to recognize that the $1 million winner of this particular competition was not a newly-designed gun or any gun at all. The big bucks went to designers of a holster… a supposedly more safe holster. A theoretical holster that is not tactically operational, not in physical working use as of now, not in production, but a preliminary model idea which is being tested. The winning high-tech holster prototype was designed by a team of four students at New York University’s (NYU) Tandon School of Engineering, Autonomous Ballistics, led by Team Leader Sy Cohen. They are in the process of submitting their idea for a patent, so they can develop a working prototype. Cohen and his team members must believe that their safe holster can be used to decrease gun deaths? “We started this because we wanted to reduce accidental deaths and stolen guns,” Cohen said. Autonomous Ballistics competed against four other teams, from New York City College of Technology and Pratt Institute and one made up of their fellow students at NYU Tandon. Design entries were evaluated based on their adaptability into the market, feasibility, flexibility, potential impact on public safety, and potential for other uses. Below is a brief video about the Holster’s Main Assembly:

Their smart holster design uses fingerprint identification, radio frequency identification (RFID), and voice recognition to keep out everyone but the legal owner (and they claim about 200 other users,) but I have not talked with them directly for their input about their technology-related design and technical details. While we need to know more technicalities, some information is available. A small fingerprint reader is embedded into the wall of the holster and the gun owner’s fingerprints must match before the gun can be removed from the holster, said Team Leader Cohen. If that does not happen, a key-card-like sensor (RFID) worn on the owner’s lapel can release the weapon. Also, a voice recognition device can also be used to match the authorized owner and free the gun, he said. Team members believe that their holster can be tailored for every gun available in the market, so that “makes it easily feasible for all the guns that everyone is using,” a team member said. It uses a battery and battery life depends on how many times the gun is drawn from the holster.

What are your thoughts about using a “smart” holster? Will it prevent injuries and deaths by its design or, perhaps, complicate things by its use and cause more injuries and deaths?  What are the costs-benefits for the $1 million holster design? What about their design components, the panel of judges, and the possible impact on public safety, and user safety? What will it cost for an actual holster? How will manufacturers respond? Do the present Level 3 and 4 retention ratings of holsters work effectively as designed? Holsters already exist that have thumb breaks, trigger guard snaps, push button safety hoods, thumb-operated levers, back straps, and required distinct forward rotating motions to access the gun. Maybe we should focus on training the operator and person accessing and using the gun for safety payoffs?

Without a doubt, I support gun safety, purposeful technological advancements, and reducing deaths and injuries from guns with appropriate strategies, training, and improved equipment. But, quite frankly, I have more questions than answers about this holster design and purpose relative to the stated goals, including serious doubts about its practicality and effective application, reliability, and actual accomplishment of the goals of fewer deaths and injuries. Just as more firearm laws do not stop “bad” guys and reduce the number of fatalities, will deaths and injuries be stopped or reduced directly by the equipment design of a holster?

Some questions come to mind:

1. Specifically how, to what extent, and how should we test the holster’s effectiveness?

2. What if your fingers are sweaty or dirty for the fingerprint reader and access is denied?

3. What if you forget to change the battery or it’s low and you must draw to defend your life?

4. What if your RFID key is out of range or the ambient noise is too loud?

5. What if your self-defense encounter requires you to not talk or talk softy; is voice recognition useful then?

6. What if you have reached the limit on your gun draw from the holster because of several gun draws and related battery life reduction?

7. Perhaps, hands-on, tactical and handgun trained and experienced folks should have been involved in establishing the goal, the evaluation criteria, and the objectives, in selecting the finalists, in testing its application, as well as in judging the final competitors for the winning product.

8. Will the holster’s fingerprint reader and other electronics infringe on personal security?

Perhaps, there should not have even been a $1 million dollar competition? Donating that large sum of money to those injured in the line of law enforcement or military duty might have been money better spent. Or applying that money toward improving individual and agency training about proper and safe gun handling and handgun fundamentals would have benefited several folks. What do you think?

© 2017 Col Benjamin Findley. All Rights Reserved. This article may not be reprinted or reproduced in whole or in part by mechanical means, photocopying, electronic reproduction, scanning, or any other means without prior written permission. For copyright information, contact Col Ben Findley at ColBFF@gmail.com.