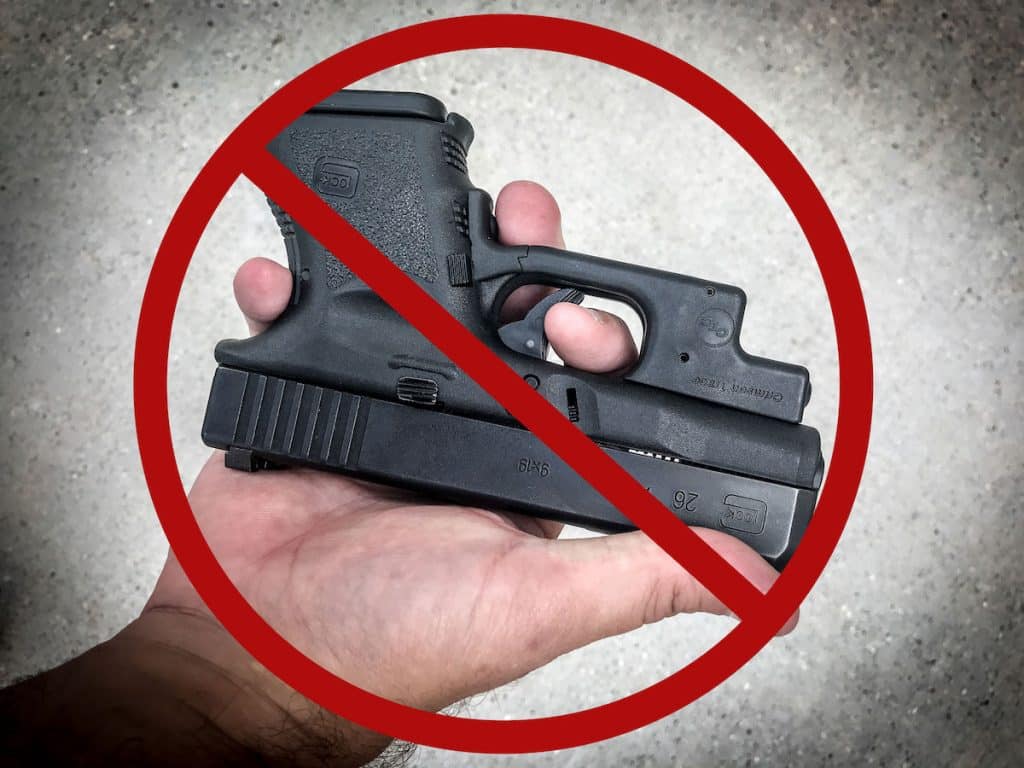 I know a lot of articles on the internet love to demonize negligent discharges. It’s for a good reason. Negligence is a dangerous habit when it comes to guns. Negligence gets people hurt or killed. However, working at a local gun range that does concealed carry classes and basic pistol courses, I’ve unfortunately run across about five negligent discharges. Each came with a very important lesson that I may have heard before but I certainly remember now.

I’m no instructor but I’ve stood there at the counter when I’ve heard the dull “pop” from the indoor range followed by one of the students running out telling me to call 9-1-1. I figured I’d write this article so maybe some reader out there doesn’t have to.

Thankfully, no one has ever lost their life and the two times someone was hurt, it was the person who messed up.

People have to learn somehow. And what I’ve learned from watching people use guns is that they either learn the right way or it’s a matter of time until they figure out why the right way is the way it is. For myself, personally, I’ve discovered the latter more times than not by just watching other gun owners.

#1: Stop telling yourself your old, floppy leather holster is good.

That holster that’s sat on your belt line and is worn in with aged, grease and sweat is going to deform. So when you slam your pistol down into it for the five thousandth time and the crease on it is bent in just a little too much and it snags the trigger, you’re going to be in for a surprise.

A good holster isn’t expensive but it will wear out eventually. When you see it starting to wear out to the point any part of it could dig up into the trigger well or fail to keep proper retention over the handgun, switch it out.

I work in a gun shop. I know what holsters we have. A lot of times, if you’re not buying one of the top brand guns we carry, we have these little polyester fabric digs we can sell for $30. There’s also “basically the right size but not” leather holsters which can do the trick. I don’t use either — mainly because I’ve seen people’s guns fall out of their holsters.

I don’t even want to tell you how many times I’ve seen a gunowner’s pistol leak out from a cruddy holster and clatter onto the ground. Wait, wait… That brings me immediately to point #3.

#3: Don’t try to catch your gun if it’s falling

That was the first negligent discharge I saw at the indoor range. I didn’t see the whole thing but through the plexiglass, I saw a guy try to catch a falling gun on the firing line and it went off. That negligent discharge went right into the ceiling tiles. He got lucky.

The instructors are trained to not chew out students when they do something really stupid but I could tell when I saw that instructor’s mouth moving that he sure was enunciating his words very carefully. I’m positive it wasn’t the first time he told his class that if they drop their gun, let it fall. I know that because it’s also written on one of the placards in the classroom where the students have to go through a mandatory period of classroom instruction before they step foot on the range.

If your gun is falling, let it fall. You will mess up far worse than gravity.

Too many hard-charging dudes want to be gunslingers. There’s nothing wrong plinking steel like you’re Clint Eastwood in a Fistful of Dollars but before you break any match records, you may want to consider going slow and steady until you get the motions down right.

One of the negligent discharges I saw was a dude who wanted really badly to do IDPA. He was hot to trot on the speed time trials and even had a shot timer on his gun belt. I like him. He still comes by the range every now and again. Unfortunately, when he was starting off, he was a little too excited to get his finger on the trigger before it was even out of his holster. He fired his three shot series but didn’t take his finger off the trigger as he went to slam the pistol back into his holster.

He had on nice Crye pants, too. Don’t know if you’ve ever seen a pair of Crye pants but they ain’t cheap. I think those were his only pair because when the paramedics had to cut them off, I think he was in more pain watching them destroy his pants than treat the bullet wound that went down his thigh.

They had to scrape out a bunch of fat tissue and muscle because, surprise, surprise, gun wounds cause some serious, traumatic injury. When he got back to the range after about six weeks, he was still set on IDPA matches but he was definitely taking a bit more time making sure trigger control was a big thing.

Hopefully your readers will get some much needed wisdom out of some of the things I’ve seen. Negligent discharges that don’t result in the loss of life need to be important learning lessons for the rest of us. There’s no need for a bunch of people to repeat those same mistakes. Somebody else already paid for them. Take the free tuition.

I was instructed, should a CRIMINAL turn toward you… “really TRY to relax, and get set as you VISUALIZE” all at same time to fire, “the assailant will be panicked” as it is and YOU WILL HIT YOUR TARGET MORE ACCURATELY.

No one ever won a gun fight by being the first one to holster his weapon. When you have made sure there are no more threats; Slowly…Carefully…Reluctantly reholster your weapon. #AmazingDocGreeneShow

As far as I’m concerned, anybody who pulls their gun out of the holster with their finger on the trigger deserves to shoot themself in the thigh…or a$$…or bratwurst.

fortunately,
the Vienna sausage is more difficult to hit

Carry a pistol with a safety and use it and #1 can never happen. I have seen video where even a windbreaker drawstring that got in the holster caused the striker fired no safety pistol to fire when inserted in the holster.

“…Carry a pistol with a safety…”

Good advise as I’m sure you know. The only way to overcome the advantage of surprise, the assailant has, is by remaining calm. With training, you can overcome that advantage and stop his agenda. Only through careful study and repetition, can you achieve the muscle memory and mental control necessary to successfully defend you, your family and friends. I especially appreciated your focus on catching your weapon. This is a VERY DIFFICULT reflex action that is seriously hard to overcome but through concentration you will succeed. Remember these other gun safety rules and you may never need to worry about that reflex action. A good holster is priceless!

If you have a negligent discharge, sell your firearm to someone who can treat it with respect.

Which manufacturer gun was it,I’d like to know where the gun went off while catching it,or trying to catch it…….