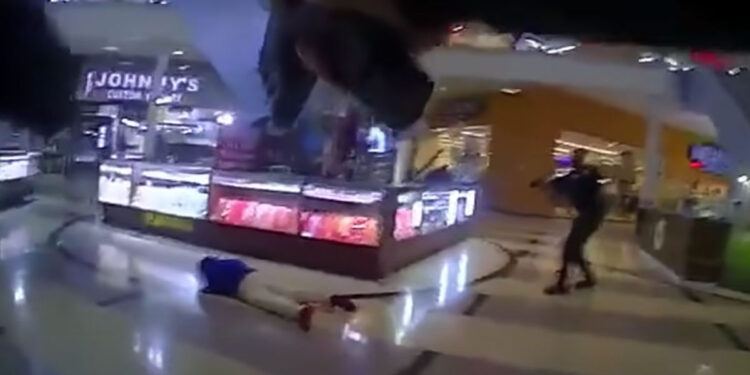 This is body cam footage from an officer-involved shooting on Feb. 23, 2022. While the incident involved police officers responding to a shooting, there are two main takeaways that we, as concealed carriers, can learn from this.

The incident started at the PlazAmericas Mall in Houston, TX. Deputy Neil Adams worked as a security guard for the mall when he confronted a shoplifter. The suspect punched the deputy and managed to gain control of his gun during the struggle. He then shot and killed the deputy.

The rest of the incident can be seen in the bodycam footage below.

Watching it for the first time, I was worried that the officer was about to get stabbed. The suspect was very close to the officer while he was telling him to drop his knife. Luckily, he maneuvered around a kiosk and made some distance before firing on the suspect five times. The suspect drops to the ground.

Another officer kicks the knife away from the suspect as they say not to secure him. And there’s a reason why. Because 15 seconds after the suspect hit the ground, he jumped up and walked away as if nothing had happened.

The officers follow the suspect, and then one of them deploys a taser sending him to the ground again, where they were able to place him in handcuffs. The suspect later died at the hospital.

A tragic incident for sure, but there are a couple of things we can learn from this.

Pistol rounds don’t always drop the person getting hit by them, for starters. That’s why we always hear something along the lines of “shoot until the threat is eliminated.”

This is also a perfect example of why I would never provide medical care to someone I just shot in self-defense. I usually have a trauma kit on my person or within arms reach, but that’s not for someone I had to defend myself against. You may think the threat is eliminated, but as you can see from this video, 15 seconds later, the man gets up and walks off. You don’t want to be giving someone medical care, have him come to, and then you find yourself in another fight.