The Texas legislature has passed a bill allowing employees to keep guns locked in their cars while at work. Lawmakers also had considered allowing concealed handguns to be carried onto college campuses.

The legislation begs a question: does it do good or harm to have thousands of Texans legally carrying concealed handguns?

There are now over 20,000 citizens in Harris County alone licensed to carry concealed handguns.

But in data compiled by the Texas Department of Safety, people licensed to carry guns accounted for only about 1 percent of people convicted of “deadly conduct”. They accounted for an even smaller percentage of convictions of other violent felonies. In all, the state data shows that of the 65,561 people convicted in Texas in 2009 of felonies of all kinds, 101 were also holders of concealed handgun licenses. 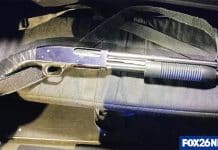