by Concealed Nation
in Articles, News
1 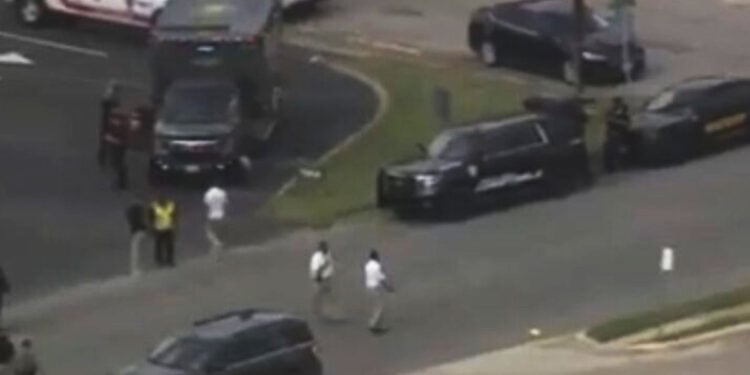 Officials have increased the death toll to 21, including 19 children and 2 adults.

The suspect reportedly entered the school with a handgun and rifle, opening fire indiscriminately.

A group of border patrol agents were nearby and responded to the scene, along with local law enforcement. An officer with the border patrol is said to be responsible for the fatal shooting of the suspect.

UVALDE, TEXAS – Texas Governor Greg Abbott has announced that fourteen elementary school students and a teacher were killed in a shooting today at Robb Elementary School in Uvalde, Texas. The 18-year-old suspect responsible for the deaths is also dead. The incident occurred at 11:32 a.m. local time at the school that houses grades 2-4.

According to a witness, the shooter barricaded himself in the building and was involved in a gunfight with responding law enforcement officers even as children ran from the building. Uvalde Mayor Don McLaughlin did not confirm numbers but texted that “this is a very bad situation.” Officials are continuing their efforts to contact the family member of the victims.

Victims were being treated at Uvalde Memorial Hospital, where it is believed that 15 students were transported there, and officials said that a 45-year-old was also hospitalized after being grazed by a bullet. Uvalde is located about 90 minutes west of San Antonio, and several patients were transferred there. Two patients – a child and an adult – were transferred to University Health in San Antonio. Officials there say the 66-year-old woman is in critical condition but did not comment on the child’s condition. The Children’s Hospital of San Antonio is also treating patients from the shooting.

Before noon, the school district said on Twitter that, “There is an active shooter at Robb Elementary. Law enforcement is on site. Your cooperation is needed at this time by not visiting the campus. As soon as more information is gathered it will be shared.” Shortly after 2 p.m. local time, the district told parents that students had been transported to the Sgt. Willie Deleon Civic Center, where children could be reunited with family members and picked up.

Local officials have released little information as they continue to work to notify families. President Biden has been briefed on the incident and will address the nation upon arriving back at the White House Tuesday evening following a trip to Asia.

Governor Abbott has released the following statement: “Texans across the state are grieving for the victims of this senseless crime and for the community of Uvalde. Cecilia and I mourn this horrific loss and we urge all Texans to come together to show our unwavering support to all who are suffering. We thank the courageous first responders who worked to finally secure Robb Elementary School. I have instructed the Texas Department of Public Safety and the Texas Rangers to work with local law enforcement to fully investigate this crime. The Texas Division of Emergency Management is charged with providing local officials all resources necessary to respond to this tragedy as the State of Texas works to ensure the community has what it needs to heal.”

How can this possibly happen in a federally-designated “gun-free” zone”?

Could it be because ONLY peaceful, law-abiding people obey the law?

Could it be because “gun-free” means ONLY criminals are armed?