The Threat of Friendly Fire: Keep the Gun Holstered 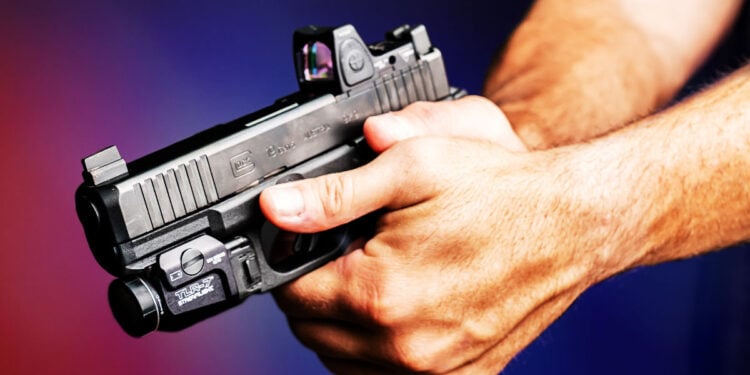 For quite a few years, the concern of friendly fire killing armed citizens that intervene to stop violence has been on the mind of those who think through such issues. As the active killer threat has increased in occurrence in the last decade, despite most other forms of crime declining, many have considered the possibility of the armed citizen drawing gunfire from other intervening parties. Due to the chaos that typically surrounds such incidents, the responding armed citizen faces a legitimate danger of getting shot by responding police officers or other armed concealed carriers. Obviously, this danger extends beyond only interceding in an active killer event as mistaken identity during violence remains likely, but mass murder incidents are where the risk appears especially pronounced.

Does the danger of friendly fire truly warrant consideration? First, let us admit that the vast majority of defensive gun uses end without any friendly fire involved; the majority of defensive gun uses also end with no rounds being fired at all, as the presence of a gun in the hands of the would-be victim often works to make thugs leave for a different appointment. Therefore, why is there more discussion on the threat of friendly than ever before?

The concern over friendly fire has correlated with the increase in frequency with which armed citizens neutralize mass murderers. There has been a sharp uptick in occurrences of concealed carriers stopping active shooter rampages that have come along with the increase in such attacks, as well as the increase in the number of people carrying concealed handguns for personal protection. A significant percentage of mass killer attacks have been cut short by armed citizens, and in a small subset of those cases, we have, indeed, witnessed the heroic responder injured or killed by friendly fire, usually from responding police officers who mistakenly identify the armed good guy as the bad actor with a gun that they are actively seeking. The chaos and confusion involved in such situations make such mistaken identities highly possible.

The concealed carrier must bear in mind that, especially during an active killer event, any responder, be it uniformed law enforcement or other concealed carriers in the vicinity, is instinctively looking for an assailant that is roaming around with a gun in hand. The gun proves the foremost identifier in such an incident, as there are no other consistent attributes; many active killers have worn face masks, or worn body armor, or have worn all-black clothing, etc., but there are no absolutes with such offenders. During a shooting rampage, however, there will be a firearm in hand. Thus, if roaming the scene of an active shooter rampage while holding a gun in your hand, you quickly fit the profile of who responders are looking for.

React Appropriately for the Situation

While it might seem obvious, the best way to avoid being mistakenly shot as the active killer is to not have a gun in your hand. It seems that many armed citizens have a natural inclination to get their defensive pistols into their hands at the first sign of violence or threat. However, you should fight the urge to do this prematurely. The circumstances should dictate when and if the gun should come out of the holster. For example, if sitting in a small room when a mass murderer walks in and begins shooting innocent people, the immediate draw of the pistol and engagement of the threat makes good sense. If an active threat is directly in your vicinity and you have the means and opportunity to end the rampage by drawing and delivering shots on target, then the correct response should be obvious.

However, when analyzing active killer events, such a clear and instantaneous scenario is not always the case. Many concealed carriers who have been caught up in active killer incidents only hear gunfire at first, as the killer may be elsewhere in the building. Sometimes panicked and running people are the first tell that such a scenario is in play. If the first indication of the problem is the sounds of gunfire from somewhere else in the building or vicinity, or if people running for the exit is the first warning, then immediately drawing your gun is likely a bad idea.

Remember that if you are suddenly on high alert, looking specifically for an active shooter, other armed citizens in the vicinity, and certainly responding police officers, will also be looking for a guy with a gun in hand. Unless the killer is within view and within striking distance, there should be little reason to immediately unholster your gun.

If you choose to go towards the sound of the gunfire or towards the area in which you think the threat is, you should be exceedingly wary of unholstering the gun even if you plan to seek out and interdict the killer; again, consider what other responders will think when they see you walking with a pistol in a ready position. One reason that many feel compelled to have the gun in hand rather than still holstered is, obviously, that the gun can be utilized in a faster manner than if still in the holster. Developing a fast and consistent draw is important for many reasons, one of which is the added confidence in keeping the gun holstered until needed.

Another tactic that can be employed is to get a grip on the gun if you suspect you are close to the danger but not draw it yet. Establishing the grip drastically reduces your draw time, yet having your hand on the gun that is still holstered makes you appear far less threatening if you are spotted by another armed responder. While you appear more threatening with your hand on the gun in your waistband than if your hands are up and empty, you will still appear far less threatening than if you actually have the gun in hand at a ready position. While the idea of not bringing the gun to bear until the last second may not be popular, it is the opinion of this author that the likelihood of drawing friendly fire during such events is only going to increase, so our tactics must change to meet this danger.

If you find yourself in the terrible position of dealing with an active killer, you must be cognizant of the very real danger of friendly fire in the aftermath; if you use force to neutralize such a threat, know that responders will be on the scene, perhaps very quickly. If another concealed carrier shows up and sees you standing over a body with a gun in hand, the possible mistake to be made should be obvious. Again, responding police officers are also a likely point of danger if you happen to be standing with a gun in hand when they arrive. As soon as the immediate threat appears neutralized, holster your gun. Stay at a distance from the threat and find a point of cover. Other bad guys, as well as arriving good guys, pose a continued threat. Holster the pistol and take up a safer position to keep watch from.

There are no guarantees when entering the fray of violence. The armed citizen prevails the majority of the time, but there is still a percentage in which the good guy fails or dies trying. Friendly fire is absolutely a point of consideration, and the best way to avoid becoming a victim of this mistake is to keep your gun concealed unless and until the moment such force is warranted.