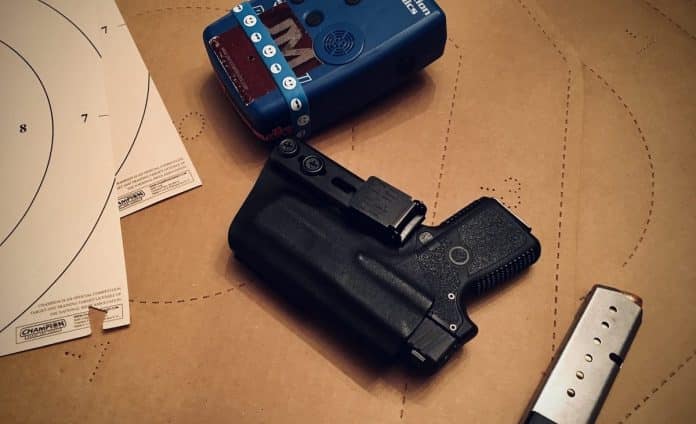 Pocket pistols, those guns that get carried often (because it is easy), but shot little (because it isn’t easy), are really the guns we should probably practice with the most. Two reasons why. They are harder to shoot well because of their diminutive size. And if they are carried more often, they are also more likely to be used when it really matters. Stuffing the gun we plan to rely on when it all matters in a holster and then in a pocket without due practice is probably not the smartest move to make.

The problem, though is that other than plinking around, it can difficult to find drills that will allow the use of a pocket-sized gun without modifying the drill. Most drills are designed for full size or nearly full size guns that hold more than 5 or 6 rounds in a magazine. Here are three drills that are pocket gun friendly, and will help us actually put in the work that we need to.

We are all familiar with or have at least heard of the bill drill. The original version calls for six rounds to an 8” circle at 7 yards. It is a quick, over in a couple of heartbeats kind of drill. Lots of smoke, lots of brass, but limited skill development because it is a narrowly focused drill.

In version two of the Bill Drill, it is more focused on developing a wider set of skills, specifically the draw. There are multiple strings of fire in the Bill Drill 2, and they progress in number of rounds fired as the strings progress. The first string is one round, the next string two rounds, then three, then four, and finally five. Each string is timed individually, and at the end of the drill, the times are added together for a total score. If you shoot it on an IDPA target as intended, each point down adds 1 second. The target size and distance remain the same as the original. Since the final string is only five rounds, it can be shot with virtually any handgun, included a J-frame revolver if wheelie things are more your flavor.

I first learned of this drill from p-f.com, but it is a pistol-training.com drill. It is a good drill for checking skill levels and giving us something to push for. It requires a total of 10 rounds to shoot through once, but consist of 4 separate strings of fire. Depending on skill level, you may shoot through it a few times. The drill is shot at five yards, and the printable target consists of a 1” square, a 2” circle, the 3” square, and a 4” circle. Each target area is for a different string. The number of rounds fired corresponds with the size of the target for that string. The 1” square gets 1one shot, the 2” circle gets 2, etc. Except for the first run-through, there is a par time for each string of 2.5 seconds. On the first level, there is no par time. After that, it has to get done in 2.5 seconds. Level two is par time shot from the ready, level three is par time shot from the holster. Miss any shots on any string, you fail that level. Pulling it off at level three is pretty baller. Baller enough that I have never done it with a full size gun, much less a pocket gun. Doesn’t mean I am not going to try, though.

There you go, three drills to stretch the legs on that pocket blaster you carry all the time. Give them a try. None of them are particularly easy. After all, pocket guns are expert guns, so we might as well try to shoot like experts. Let us know how it goes in the contents.