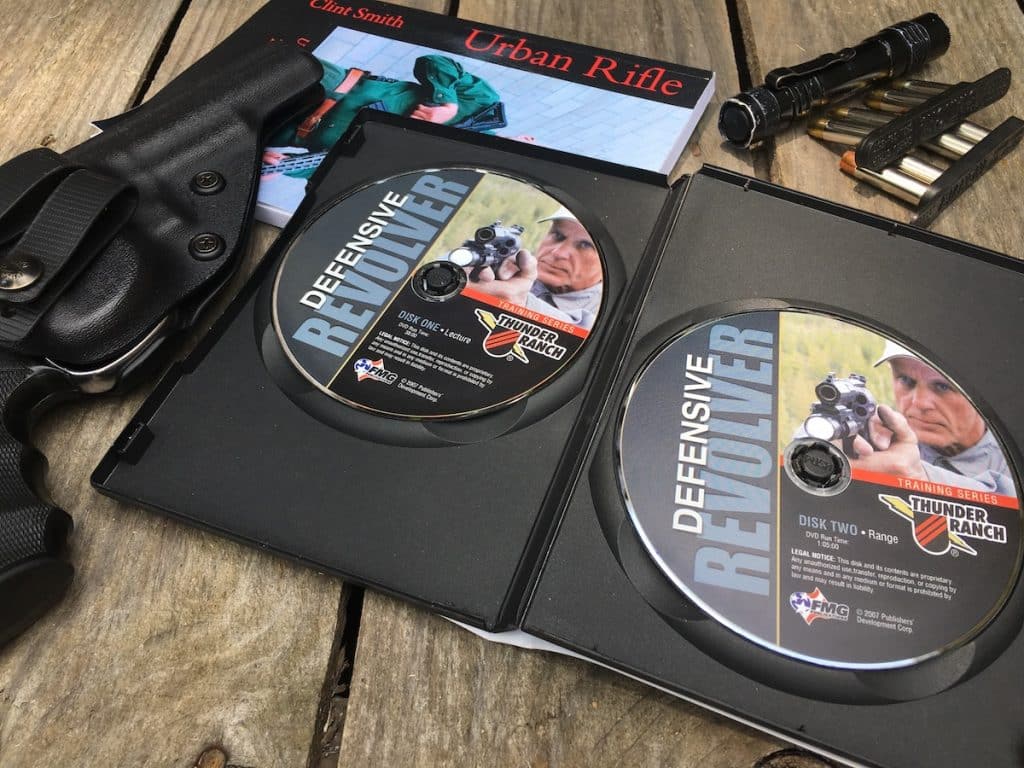 Shipping my guns and I to Thunder Ranch in Oregon for one of Clint’s revolver classes is well outside of my resource capability, if he even still teaches them. In lieu of that, I did the next best thing, I bought his Defensive Revolver DVD. There are actually two DVD’s in the case; Disc 1 is a generic one that covers the disclaimer, safety brief, and a couple topics reference Thunder Ranch’s methodology and logic. It is 38 minutes long and a decent primer. Disc 2 is where the real meat is, and just over an hour in length. The safety brief is refreshed (a good thing), and then Clint starts to get to the business at hand.

Other than Clint’s natural flare, one of the things I like about him is his historical perspective on firearms and shooting. He spends quite a bit of time talking about the evolution of the revolver and why it is the way it is. He breaks the revolvers into three basic categories, small, sort of big, and really big. There is some time spent talking about grip sizes (i.e. square butt vs. round butt), stock selection, and what he prefers and why. It becomes obvious here that he is an avid S&W fan, in fact, I do not recall a single non-S&W revolver being featured in the DVD. If the development or evolution of a firearm type interests you, you will like this part of the DVD.

Clint goes through the process of selecting a revolver, or why one feature set might be better than another feature set for a given mission. He makes the point that often time’s guns that are carried are compromise guns, and that becomes a theme while Clint is going through the different types of revolvers. When he starts talking about sights, he discusses the potential limitations between a 4” gun with adjustable sights and a J-frame with small fixed sights. When he talks about the uber lightweight J-frames he talks about the recoil and the beating the shooter takes while using them. As revolver guys go, Clint seems to be a fan of what he calls “midsize” revolvers over the smaller revolvers when it comes to defensive use. While he may call them midsize, I would probably call them duty size revolvers. Being someone who recently has been carrying a 4” K-frame concealed, I can say there are times a smaller gun would be nice, but I make the same prioritization that Clint does. I want the gun that I can shoot well, not so much the gun that carries well. It is easier to work around a gun that is harder to carry than it is a gun that is harder to shoot. As Clint puts it,

“No one thinks much about big guns until there is a gunfight, and then everyone wants a big gun. So I just take one along to start with and be done with it.”

At the 30 minute mark we get to the first actual revolver shooting technique topic covered in the DVD, reloading. As far as guns go, I think reloading is maybe a little more important with a 5 or 6 round revolver than it is with another gun that has a 15 round capacity. Clint sets himself apart a bit when it comes to reloading the revolver and recommends keeping the gun up, and forward of the body when loading. His argument is that technique helps to maintain better downrange awareness and being able to better know what is going on around us while reloading. It is a valid argument to make, but not without cost. He openly admits that the idea, in his opinion anyway, is not to have the absolute quickest reload, but to have a technique that is tactically sound.

All of the usual suspects like draw technique, using cover garments, different types of holsters, different types of loading devices, are all covered in the DVD. A couple things that are not so usual, at least with regard to revolvers, is use of a flashlight with a revolver, and one handed manipulation, specifically one handed reloads. With regard to flashlight techniques, Clint points out that with a wheel gun, we have to be aware of the gap between the cylinder and the forcing cone. Not because we are worried about the flashlight, but because many of the flashlight techniques have the hand holding the flashlight along the side of the gun. If a revolver shooter is not paying attention where their support hand holding the flashlight is in relation to the front face of the cylinder, they could risk injury from the gasses escaping from that gap. He also mentions reloading with a flashlight in the support hand and how that can be accomplish with only minimal adjustment from the normal technique, something that probably isn’t covered in many other DVD’s. While perhaps not something usually covered, Clint’s demonstration of one handed reloads is pretty straight forward, just pin the gun somewhere and reload it. Straight forward is kind of a theme with Clint, and this is no exception.

So is it worth the $25 and a few extra bucks for shipping? While saying I agree with everything in the DVD would be a stretch, exposing ourselves to different ideas and techniques when it comes to shooting or weapons handling is one of the ways we improve as shooters. If we are carrying firearms for personal defense, or even just using firearms for competitive or recreational shooting, it benefits us to be in a constant state of improvement. For the cost of two boxes of ammunition, or maybe even a little less, you can get access to the thoughts and ideas of one of the most seasoned instructors out there on how to run the wheel gun. Given that wheel gun guys aren’t all that common these days, I would say well worth it.

How Often Do You Replace Your Carry Rounds?