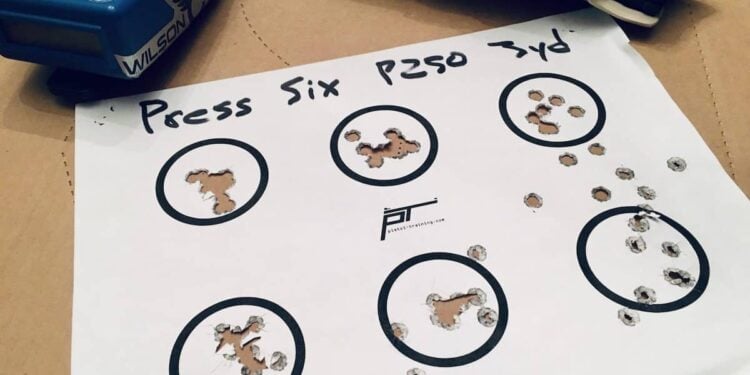 Many, many years ago I found Todd Green and pistol-training.com. Back then I took a whack at a drill called Press Six. Way back then (at least 9 years ago), it kicked my butt. It is a series of 2” circles, shot from whatever distance you can hit a 2” circle, with par times. Fast forward nearly decade, and well, I am better at it, but not much.

Press Six is a tough drill to shoot clean, but it is very good at what it is intended to do, improve the draw. Todd Green used a specific draw technique called the press out. It was intended for use with DA/SA guns and allowed the trigger press to start earlier in the presentation than other draw strokes. Not many people are using the technique these days. At least not in a pure sense. Some attributes of the Todd Green style press out can still be seen in other techniques, but not exactly how Todd did it. Press Six was intended to work that technique, but will work with other styles of draw technique as well.

The drill uses a printable target that is available here. It calls for a total of 62 rounds. There are 44 draws through the course of the drill, with decreasing PAR times. On the top left circle, draw and fire one round for a total of ten reps. For the top center circle, do the same, but this time with a 3 second PAR. For the top right circle the reps are the same, but now a 2 second PAR time. On the bottom row we up the round count. The bottom left circle is draw and fire two rounds for a total of 5 reps. Same with the bottom center circle but with a 3 second PAR. On the bottom right circle, the PAR stays at 3 seconds, but the round count bumps to 3 and only 4 reps this time.

The distance is variable based on the shooter’s skill level. It is supposed to be shot from a distance that the shooter can reliably hit a 2” circle. I can hit a 2” circle from 5 yards all day long, but I shot the drill at 3 yards. My draw at speed is my weakness, so even though the marksmanship part of the drill is easy work for me, pulling it off at speed is a different story. I knew what was coming, so I set myself up for as much success as possible. Shooting this drill for the first time I would definitely start at 3 yards. If you nail it, move it back on the next run through.

The top and bottom left circles came easy. The top and bottom center circles required quite a bit of focus to pull off mostly clean. I was on the edge of pulling off the top right dot. The bottom right circle was a “close my eyes and pray” type of exercise. The drill works though. This is a drill that actually has enough reps in it to actually accomplish something. The difficulty of the reps gradually increases, pushing the shooter harder and harder to get them to go just that extra little bit faster.

This drill is going back on the regular schedule for me. Most drills don’t work a specific skill as well as this one does. Bonus that it is in an area I need to work on anyway. Give it a try yourself and let us know how it goes.