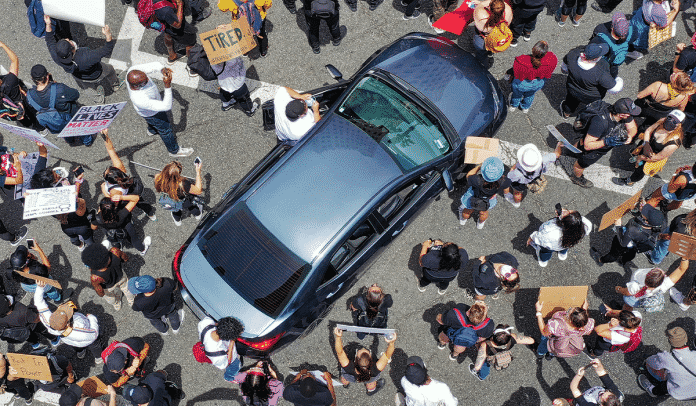 We are currently witnessing another outbreak of civil unrest gripping our nation. While such waves of protest are often inspired by legitimate concerns, these demonstrations provide a theater for bad actors to vandalize, loot, and destroy, and sometimes act violently towards people who are simply in the way. We have seen many instances were innocent people have been pulled out of their vehicle and beaten, simply for being in the wrong place at the wrong time. If facing such a situation while in your vehicle, here are several considerations for staying safe:

We should strive to avoid being caught in the midst of such an event if at all possible, though sometimes these demonstrations spring up very quickly. Keep an ear on the news, and be aware of your surroundings so that you can be sure you avoid such demonstrations entirely. Know your surroundings; do you live or work near likely points of protest, such as courthouses or police precincts? Stay ahead of these situations to your best ability.

If, however, you are caught by surprise in a demonstration or a riot, be prepared to escape the vicinity through defensive driving. When stopped at lights or in traffic, always leave room between yourself and the vehicle in front of you so that you can maneuver in the event of an emergency. If you come to a stop and see a mob of people approaching, be prepared to escape the area through unconventional driving.

A fast U-turn, even if it involves driving on the curb or over a sidewalk, to get to a street that allows you to drive, is in order. When stopped at lights or stuck in traffic, be aware of what is around you so that you have a plan to make such a move if you must. Also bear in mind that you can push vehicles with your own if absolutely necessary. If boxed in so that you can’t move, it is possible to push a vehicle if you do so at a moderate speed and push it from the corner. While such a move would never be an option under usual circumstances, in the event of needing to escape a deadly situation, it remains a viable alternative.

The Vehicle as a Weapon

The vehicle itself is a two-ton missile, so using it to escape a deadly situation is preferable to exiting the vehicle and being much more vulnerable on foot. In order to use the vehicle to escape, you need to keep it mobile and avoid getting boxed in or hung up so that the car is immobilized. Staying in your vehicle and driving with good tactics remains the best option.

If you must use the vehicle as a weapon to forcefully escape a violent crowd, the rules that govern self-defense apply. Are you facing a deadly threat? This is the decision that truly matters. A peaceful crowd of protesters walking by your vehicle is obviously not a deadly threat. A violent crowd that rocks your vehicle, smashes the windows, or jumps on the hood with a Molotov cocktail is absolutely a deadly threat.

Should you need to use the vehicle itself to defend your own life and the lives of those with you in the car, it must be done skillfully. First, consider that escaping to safety is the priority, running people over is not, though a violent crowd may leave you no choice. However, the way to approach driving through a crowd is to push people out of the way at a moderate rate of speed rather than ramming into a crowd at a high rate of speed.

There are two benefits to this: first, you are less likely to kill people if you are moving slowly. Second, hitting a human being at a fast speed can immobilize your vehicle. Moving at a rate of about fifteen miles per hour will give the car plenty of speed to not get stopped by anything less than a truly huge mob, and it will ensure that your car is not immobilized. This is the last option for a desperate scenario, but if it is the only way to protect yourself and your family in the vehicle, push people out of the way at a moderate rate of speed until you get in the clear.

Shooting from the Vehicle

If the worst possible scenario comes to pass and the vehicle becomes immobile in the midst of a violent crowd that is actually attacking your car, you may need to use your firearm. This is a very bad situation to be in as remaining in the car leaves you vulnerable to it being flipped over or set on fire, but abandoning the vehicle is fraught with peril if you are actually surrounded. Getting out of the car with a gun in hand when mobbed by a large crowd is a sure way to get disarmed and trampled. If you must shoot, all of the rules of self-defense apply. Are you truly facing a deadly threat? If so, you may have no choice.

Shooting through the side window will, hopefully, clear a path so that you can get yourself and other occupants out of the car and escape the crowd. Angry mobs are simply unpredictable. Most often, within the United States, groups of people scatter when shooting rings out, and this would be the hope. However, we can’t count on it. Facing such a situation is a worst-case scenario, and speed, determination, and violence of action may be the only recourse.

I strongly suggest that wearing your gun on your person is the best policy rather than having it in a vehicle console. Should you need to evacuate the vehicle quickly you may not have time to even access the gun if it is not on you. Also, if you get caught in the midst of unrest, taking the seatbelt off makes the most sense as you will not be moving fast and the greater threat is the need to flee the vehicle quickly.