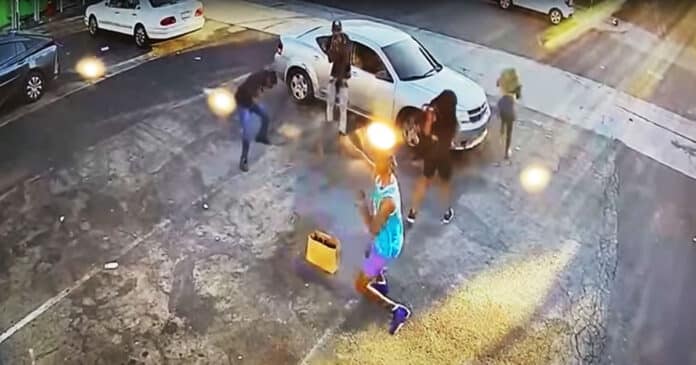 This incident occurred this past Monday in Los Angeles. While it happened in the evening around 7:10 PM, it was still in broad daylight. And it was all caught on by nearby security cameras.

A man and two women were standing in a parking lot, possibly outside of a store, as the male can be seen holding a shopping bag. That’s when a silver sedan backs up to where the three victims were standing.

As one of the suspects raises his gun, the male victim seems to set his shopping bag down, draw a gun out of his pocket or shorts with his left hand, switch hands, rack the slide and fire a shot within a second. I could be wrong, but that’s how it looks to me. Regardless, the victim quickly draws his gun and gets what looks like three shots off as he retreats. The two suspects on foot ran off, and the driver sped off. The police would later catch all three suspects.

None of the victims were hit by the gunfire. One suspect was hit in the upper left thigh, and the other hit in the right calf.

The police provided no information about the victim, so it is unclear if he had a concealed carry permit or face any charges.

Regardless, he was prepared to defend himself, and that he did. We never recommend drawing from the drop (drawing with a gun in your face). It could have turned out way worse had the suspect fired before the victim could draw his gun. And over what? A wallet and whatever was in the shopping bag? That’s definitely not worth it to be. But in this incident, the outcome favored the victim.

Unfortunately, he’s in LA and will probably be charged with attempted murder for not volunteering to be an easy target. Although he is a person of color so he might get a pass. Caucasian in his home, protecting hos csstle and family, never.

Both gunmen were on parole, likely for a violent crime or crime involving a firearm.
Until the citizens of California and other states get tired of being victims they will not be safe.
Continued election of officials who insist on low or no bail for violent criminals as well as probation for recidivist criminals instead of hard time, and being soft on convicted felons hurts lawful citizens.
Their policies promote a boldness in criminals because they know they are not likely to go to jail.
However, if they do it won’t be for long, as at trial the mother of a recidivist criminal will wring her hands while crying and tell the judge how sweet he is and its not his fault society did it to him.
If convicted they face easy time while there and build a reputation they are not only proud of but brag about.
The recidivist criminals actually have a risk/reward mentality, they believe they are winning.
They see the the defund police movement as their supporters …and why shouldn’t they?
Bring back the chain gang and stop the ‘hug a thug’ treatment of victimizers.
Crime would surely see a decline, thugs don’t work, thugs live the thug life.

I get so frustrated over comments like “And over what? A wallet or the contents of a shopping bag?”

Statistically, there is a high percentage of chance that the robber will shoot you EVEN IF YOU COMPLY and give him everything he demands.

This “victim” had decided long before this incident that he would not be just another victim. And he was ready to do what needed to be done.

I would give him two pieces of advice. Carry your gun in your right front pocket. Keep a round in the chamber. I’m amazed that the robbers did not start shooting as soon as he pulled a gun out of his pocket, much less giving him time to chamber a round.

It is up to you if you are willing to risk your life over what’s in your wallet. Can you link me to the stats that show there’s a high chance you will get shot if you comply? Thanks.