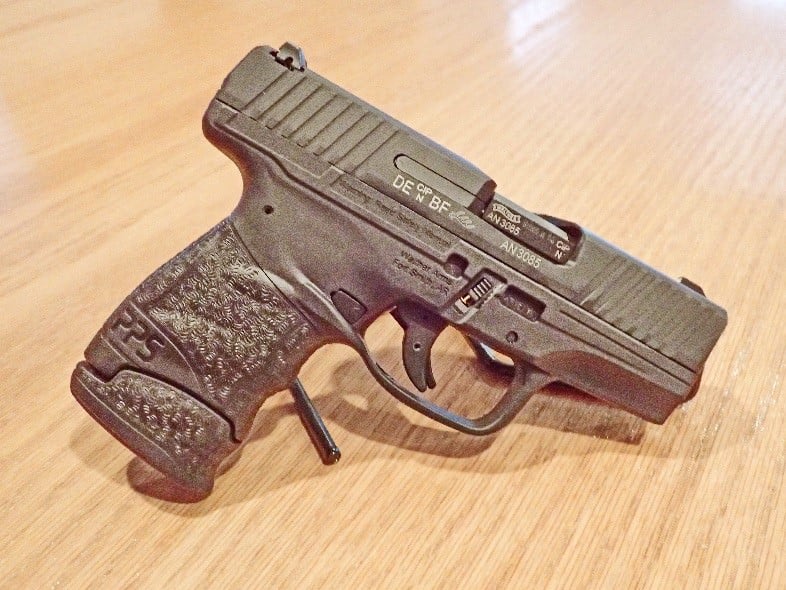 Walther’s legendary firearms go back 130 years. James Bond has been carrying around a Walther for as long as I can remember. Their quality is superb and their designs have been groundbreaking at times. In 2001 Walther introduced the original PPS model which was one of the first, if not the first, introduction of a single stack 9MM compact handgun to the market. This new for 2016 PPS M2 is available in both 9 MM and .40. It is also sold as a law enforcement edition with phosphorus sights and 3 magazines. We’re going to review the 9 MM version. The 9 MM M2 version MSRP is $469 and the LE version retail price is $499. The .40 caliber is scheduled for release in late spring or early summer.

This pistol comes in a nice plastic lockable case with the Walther logo emblazoned in blue on the lid. Inside is pre-cut foam for the pistol and spare magazine. It comes with both a flush fitting 6 round magazine and an extended 7 round magazine. The case also contains a lock, empty chamber indicator and manual. Walther sells an optional extended magazine with an 8 round count and slightly longer base plate.

The gun weighs in at 21.1 ozs with an empty magazine. The barrel is 3.18” The magazine choice dictates the total height, which can be as small as 4.4” or as much as 5.3” with the optional 8 rounder inserted. The trigger pull is advertised as 6.1 pounds. My scale showed it to be an average of 6.4 pounds after three pulls. It comes equipped with three-dot sights that are made of polymer. The rear sight is windage adjustable. The magazine release is a thumb release push button variety that can be reversed. It is striker fired and has a cocking indicator on the rear of the slide. It provides a visual and tactile reference, which can be very useful in the dark. Also included in the design is a loaded chamber port notched into the top of the ejection port that allows you to see into chamber for a quick and easy reference to establish if there’s one in the pipe. There is a slide stop on the left side and a takedown lever on both sides right above the trigger. The slide is nicely serrated on both the front and the rear of the slide assembly. 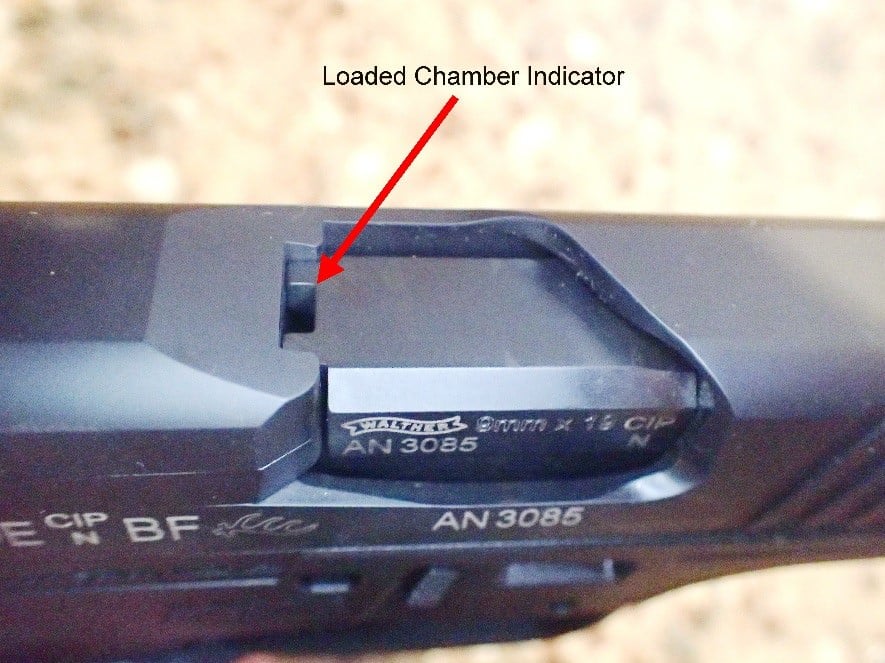 Let’s talk first about the grip and feel of the gun and overall ergonomics. With the extended magazine in place, I can get a complete purchase on the gun. While there is no changeable backstrap, I honestly don’t see the need for it on this gun. It fits well in the hand and is nicely contoured. The grip is moderately stippled all the way around and it just feels good. There’s no other way to describe it. It feels good in the hand. Now, I do have one small complaint. For my hands, the trigger guard is not notched enough to be completely comfortable for my strong hand grip. My middle finger 3rd knuckle ends up directly under the trigger guard, which initially is fine. After shooting a few magazines through it, it starts to wear on me a little. Not a lot, but enough to make you notice. That really is my only minor complaint on the grip. If you have shorter fingers, this may not be all that problematic for you. I can manipulate my grip a little, still maintaining a proper grip, and get that knuckle out from under there. But if I pick the gun up and don’t think about it, I end up right there. Something of note is that the rear of the grip is slightly forward of the back end of the slide, which provides more leverage than most conventional designs. The slide is also mounted low, providing a lower bore-axis. Both of these design elements help manage the recoil and provide a more accurate shot.

The next item I want to highlight is the ease that this gun is taken down. It is one of the easiest I own. There is a “switch” just over the trigger. Its use is simple. First, clear the pistol and remove the magazine. Next, pull the trigger to decock it. Then, simply grasp the “switch on both sides pushing it downwards and the slide will release. That’s it. Job done. Reinstalling the slide assembly is just as simple. Line of the rails and slide it back on. It will automatically lock in place. Couldn’t be simpler. 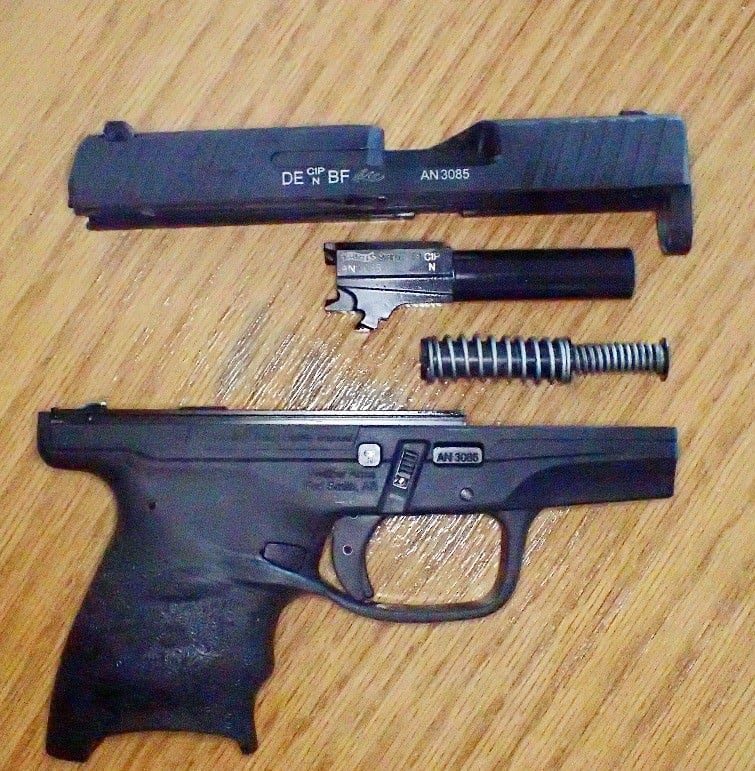 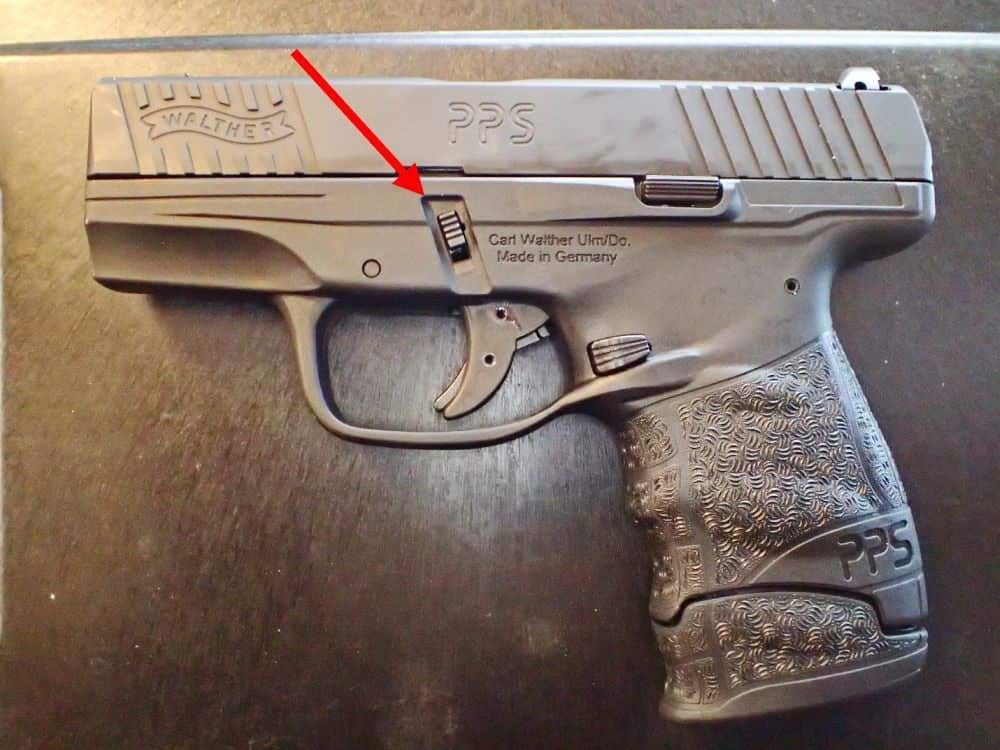 After reading the manual and following the instructions to clean the pistol and lubricate before firing, I did just that, adding a fine coating of Break Free to the barrel and working parts. For the shot tests I selected American Eagle 115 grail FMJ for normal range/target ammo. We also fed it some Federal HI-SHOK 115 grain jacketed hollow points to test its use of personal defense ammunition. It ran both types flawlessly. The three dot sights are easy to pick up. Even though they appear to be on the smallish side, when looking down the slide they are actually quite prominent. As mentioned before, they are made from polymer and since they are low profile, they will be less apt to snag on clothing. They’re also on either end of the slide giving you a pretty decent sight radius. Follow up shots were also easy to pick the sights back up rapidly, even sending double-taps downrange. Overall, I am very pleased with the size and quality of these sights. I would, however, prefer to have factory installed night-sights. I suppose I could get them by buying the LE edition. 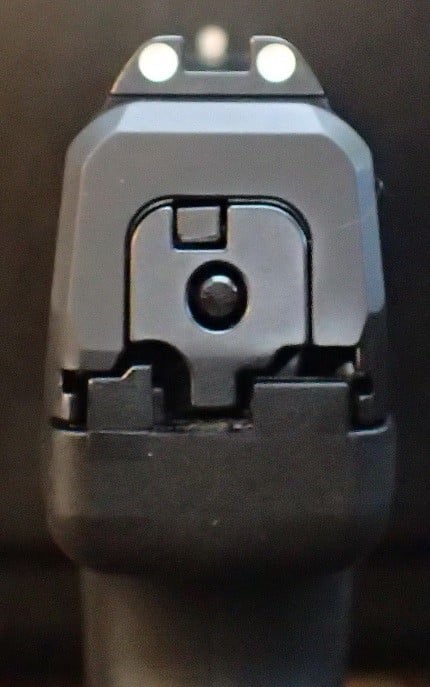 On top of having a superb grip, great ergos and very good sights, the trigger is even better than all of those things. It is a Single-Action-Only (SAO) trigger with a Glock-style safety switch on the trigger itself (there is no external thumb safety). It is smooth all the way to the break point, with a fair amount of take up. Even with that take up, it is very predictable. The reset point produces a satisfying click and is very short travel. While you’re working the trigger, you’ll also notice the striker begin to protrude out of the slide, then snap back when it fires. While there seems to be a lot going on there, in reality the trigger is one of the best I’ve ever experienced, especially on a compact pistol. 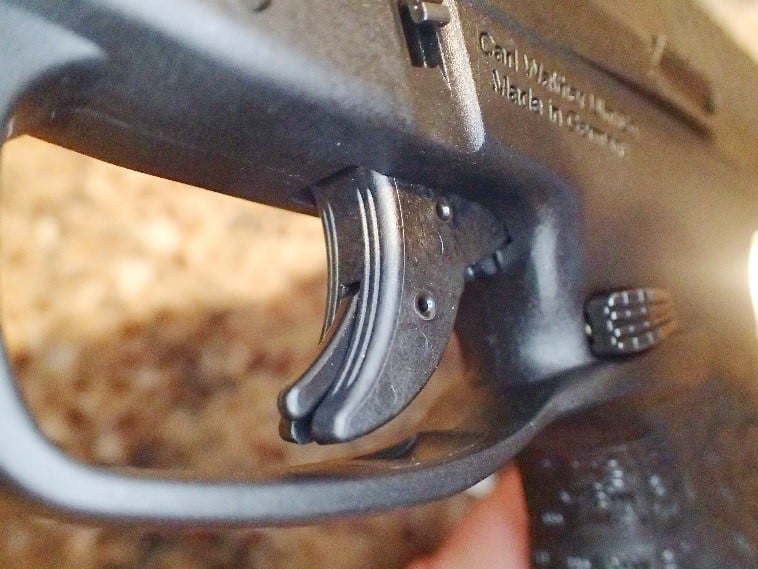 We ran through about 150 rounds and did not experience a single failure of any kind. Recoil was very manageable. As discussed earlier, follow up shots were quick and easy to get back on the target area. The more I worked with the M2, the more I liked it. We switched to the short magazine and found that there was a fair difference in controlling the shot. My little finger had nothing to grab hold of with the smaller magazine inserted and thus, changes my grip somewhat. This is to be expected and I’ve experienced this with some other guns. However, I seemed to notice the difference more with this gun in particular. Partially, I think, because the extended mag provide so MUCH control, the loss of even a little becomes more noticeable. I was still landing all of my shots in the black at 7 yards, but even a little more erratic than usual. Steve, our resident lefty and tack driver, reeled the target out to 15 yards and was effectively nailing the target time after time at that distance.

Since we had two magazines to work with, we decided to run some tactical magazine changes. Once the mag runs dry, punching the mag release pops the magazine out and away very effectively. It’s spring loaded, so even holding it horizontally popped the magazine out of the well quickly and without it sticking, getting caught or otherwise obstructing the intended speedy exchange. The magazine well is somewhat beveled at the bottom allowing the next mag to find its way home very easily. Tactical mag changes get an “A” from me on this gun. Something I noticed, this gun is not equipped with a magazine disconnect, which is yet another plus in my book.

Walther has managed to do what few other manufacturers can do. They took the PPS design, which was already a really good gun, and made it better. On the way there, they actually ended up making it less expensive. The PPS retailed for around $599. The new M2 can be had for about $425 (9 MM version) at a dealer near you. Throw into the mix Walther’s lifetime warranty and Walther has put offered up one of the best shooting, best feeling, most affordable and best warranty in the category. It’s meant for carry duty being lightweight and compact, and it is also a good concealable option. I used a couple of holsters with this and had no printing or exposure issues. If you see me out, stop me and ask me about it. I’ll probably have it on me.