I was at the range recently shooting one of my favorite pistols at 25 yards; checking the scope’s zero before I take it to the open range and finalize it at 50 yards. With the exception of the trigger sticking (weak trigger spring due to my trigger job) and a “soft load” that hit low on the target, I am happy to say that the Ruger 22 Charger performed almost flawlessly.

After shooting numerous Fiocchi 38-grain PHP, CCI Blazer 40-grain RN, and CCI Mini-Mag 36-grain CPHP, I pulled the targets back to the firing line to evaluate the results.

Earlier, and using the scope, I had noticed a hole in the target to the right of center and one at the very left edge of the target sheet. Wow! I thought. I really pulled those shots. Upon closer inspection, I saw that the holes were noticeably larger than the .22 LR rounds I had been firing. 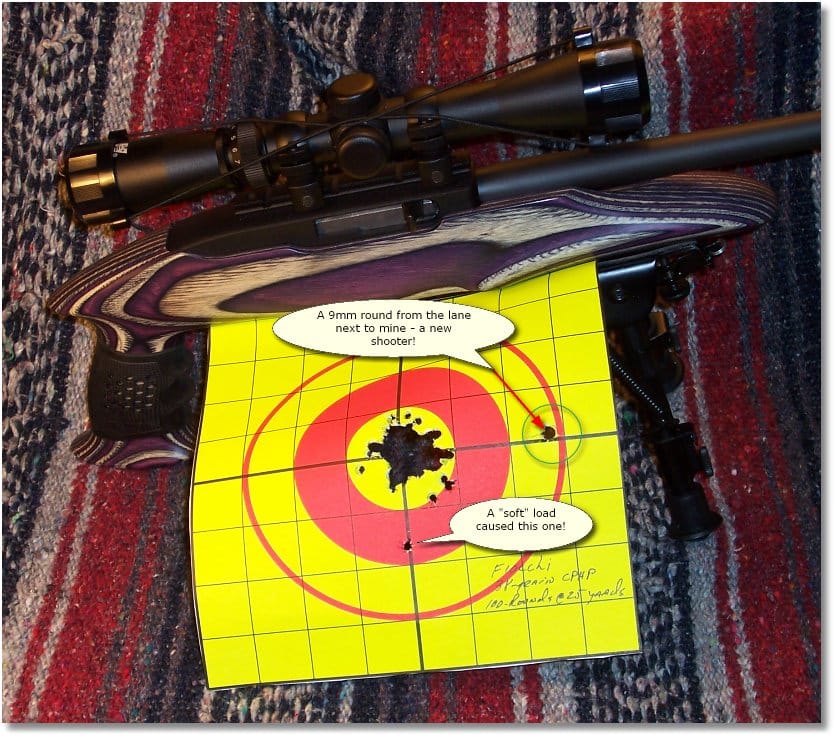 In the left lane next to me were a father, wife, and daughter trio that were firing a 9mm that was equipped with a laser. They had posted their target about 10-feet (two 4″ hand-made targets) in front of the firing line and I noticed the laser dancing wildly around the range. Concentrating on my own target, I paid no particular notice to his or her firing except noticing that somebody could not hit the target even with a laser. Sure enough, the rounds that struck my target were 9mm rounds; A fact that I confirmed when I got the target home.

Now possibly, they were new shooters. I do not know. I do know that in this case, a laser did not help them; whereas, concentrating on the basics of marksmanship probably would have.

I believe that too many people think that lasers are some magical guidance system for their firearms. Yes, they are effective. However, they are only effective if the shooter understands and practices the basics of shooting a firearm before moving on to a “better” sighting method. I would say this regardless if the sighting system was a scope or red-dot sight. Without the basics of marksmanship firmly in hand (no pun intended), and thoroughly ingrained in the mind, any sighting system is ineffective. Even point shooting takes the basics to a different level.

Of the box of ammunition fired, (I know this because they left the empty box of ammunition) there were 10 holes in their targets. Somebody really needed good instructions in shooting a handgun.

While I do not have a laser-equipped handgun, I do keep a Mossberg 500 20 gauge (Little Boo) as the home-defense shotgun and it is equipped with a laser. A switch, mounted on the right side of the stock, turns the laser on and off (I shoot long guns left-handed). With “Little Boo”, and at 25 yards, I can remove the X-ring of a target shooting slugs with or without the aid of the laser.

If I expect to use my shotgun primarily in some mode of point shooting, focusing the eyes on the target, the laser can provide me with confirmation of my pointing both in training and in a fight.

However, most point-shooting systems assume that I will be standing. Unconventional positions, common in real fights, may preclude that, making the laser useful.

Contrary to popular belief, one must aim a shotgun. With the laser, I do not need that “cheek-weld” to line up what I intend to hit. That can be an advantage when I cannot or do not have time to properly mount the shotgun. Nevertheless, there are also disadvantages of having the laser mounted.

The dot from a laser may not be visible on the selected target in bright light or in a smoky, dusty or foggy environment. In addition, the reflection off the particles in a smoky, dusty or foggy environment may trace a line straight back to the gun, showing my assailant my location. You see this many times in movies and on television shows where laser beams are dancing all around as the police enter room following a flash-bang.

One of my concerns about mounting a laser on this particular gun is that under stress, in the dark, I may squeeze the laser switch unintentionally, prematurely, or fail to relax my grip on it when moving, which could reveal my location.

Training with the sights (even with the shotgun) conditions me to bring the gun to the same sighting plane every time that I shoot. Even when I cannot see the sights, if the gun is in my sighting plane and I can see my target, I should be able to hit it and be “combat accurate”.

Using laser sights can keep me from developing those conditioned reflexes, incorrectly referred to as “muscle memory,” which allow me to hit my selected target in sub-optimal conditions. However, I try to train myself against this from occurring.

Laser sights are useful to minimize exposure from limited cover. An example would be that I am kneeling and peering around a bedroom door that leads to a hallway. I do not want to expose more than I need to and try to limit my exposure to the barrel of the gun that I am holding.

Laser sights are useful when I am in an unconventional position, particularly if time or reduced light does not allow for acquisition of the sights or a conventional system of point shooting. An example might be if I suddenly become aware of a threat from behind and turn to face the threat.

I do not substitute the laser for training with the conventional sights or a method of point shooting that will still work if the laser fails. Anything that depends on a battery is capable of failing. Further, I do not train with the laser on at all times.

Evan Marshall once commented about laser sights, “It CAN be an advantage, it should not be a crutch. I tell folks from time to time they should turn the battery off and practice for the day when the battery goes dead – remember batteries are designed to go dead so more batteries can be purchased and the battery company can get rich.”

As for my neighboring shooters, an investment with the battery company that manufacturers the battery for their laser might be worthwhile.