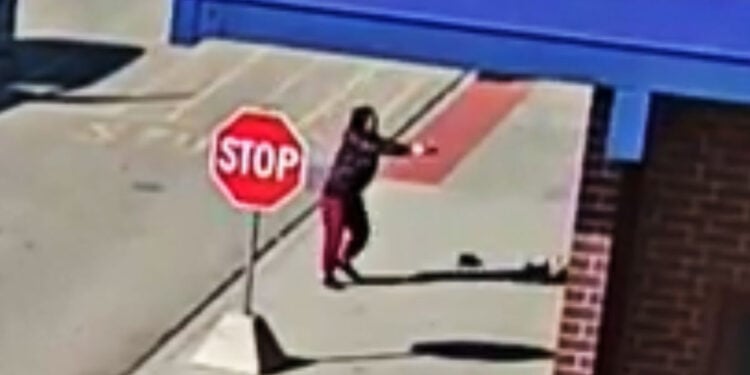 A woman was forced to use her gun to defend her husband as he was getting beaten over a dispute in a parking lot.

On Sept. 28, 2022, a husband and wife were leaving a Meijer superstore in Greenfield, WI, “in search of her favorite hash browns.” Surveillance footage shows the couple in their Toyota 4Runner stopped at a crosswalk in the superstore’s parking lot.

After watching the surveillance footage, it seems like the two fought, and the man outside the vehicle backed off. The other man got out of his vehicle, and the fight between the two ensued.

The surveillance camera did not record the fight but showed a woman getting out of the vehicle and pointing a gun at them. Fearing for her husband’s life, as she watched the man kick her husband in the face, ribs, and chest, she fired at the man fighting her husband, hitting him in the chest. She told police she didn’t know if she had shot her husband or the other man.

Both men were treated for their injuries at a hospital, and the woman was detained. The man who was shot is now paralyzed below the waist.

After a police investigation, no one involved in this incident was charged, and they stated that the woman clearly used her gun to defend her husband.

After looking at the choppy surveillance footage, I’d like to point out a few things here. I don’t really understand what the confrontation started over, as it seems the vehicle was at a stop when the man walked in front of their car. The couple in the vehicle stated he appeared out of nowhere, but the footage seems to show otherwise. How did that turn into a verbal confrontation? Did the driver say something to the man after he walked in front of his car? I’m going to assume that he did because why would the man walking in front of the vehicle say something back to the driver? Yes, that’s possible but let’s assume the driver said something first. We can take a point from this: don’t start confrontations with people. Pretty easy. Someone walks in front of your car, and you think you have the right of way? Let it go and drive away.

After the verbal confrontation, the man outside of the vehicle attacks the driver and then seems to walk away. Then you can see the driver leave his vehicle, and the fight ensues. This was another mistake (if mistake #1 was starting the verbal confrontation). At this point, he could have just driven off. But instead, he gets out of his vehicle and continues the confrontation. Then when the other man gets the better of him, his wife is forced to use her gun in self-defense of her husband. I think all of this could have been prevented from the start.

It could have been avoided for sure. It’s better not to leave the vehicle at all. In terms of the guy that got shot, I have to wonder what he thinks now. Can’t predict what’s going to happen.

None of us were there to see or hear what went on, but I agree it could have been avoided. Whatever happened to start the fight, the driver never should have gotten out of the car. With the way people are wound up these days, you could probably get in a fight every time you went anywhere. Just stay cool and don’t look for trouble, it’ll find you easy enough on its own.