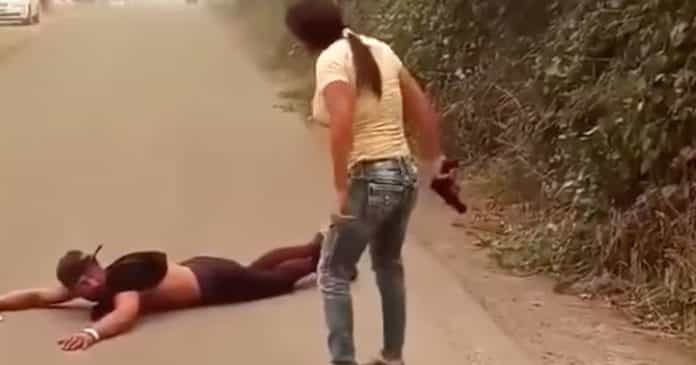 An Oregon woman notices a man leaving her wooded property while driving on the road adjacent to it. She exits the vehicle, pulls a gun, and orders the man to lie down on the pavement. A friend in the passenger seat records the incident. She apparently posts the video on Facebook. I watched it on Youtube.

The woman notices that the man has matches in his hand and asks him if he set anything on fire. She continues questioning him about what he’s doing on her property. The video ends before police arrive, but there is a photo of the suspect being arrested and placed in a police vehicle. The woman claims in her post that the man had multiple warrants, but it’s not known if any charges were filed against him.

There is just so much that could go wrong for this woman.

While arson can certainly be a deadly force threat, mainly if the target is an occupied building, simply carrying matches while trespassing seems a bit of a stretch to me; the woman claims the man threatened to burn her property down. Still, there was no evidence of that in the video or the report. But even if he did, a verbal threat is not an imminent deadly force threat. Catching him in the act of trying to set a fire might be.

An imminent threat is one that is happening right now. Anything short of that does not justify a deadly force response. Perhaps this incident started earlier, and this video only captures her catching up to him, but at the point she finds him, he is just stepping onto the road. He is displaying no weapon at this point.

This looks more like a citizen’s arrest than it does self-defense. I don’t know the citizen’s arrest laws for Oregon, but even if you can tick off all the requirements to perform one, they are fraught with potential legal consequences. This man didn’t resist, but what if he had, and she was then forced to shoot him? It could have gone very bad. Just don’t attempt this sort of thing. Be the best witness you can and let the police do the capture part.

This event occurred a year or two ago. Why are you just now discussing it?

Because there are still lessons that can be learned from it.

So as usual a bit of perspective is lacking. What you fail to mention is that this happened during a terrifying time when fire after fire was being set purposefully up and down the state. Despite the lies that the media spewed, we who were here SAW it happening. Many of us were out patrolling our neighborhoods trying to prevent any more acts of domestic terrorism just like her! Rural Oregonians are surrounded with this criminal element every single day, often with no law enforcement available in time (before funding in Josephine County…sheriff doesn’t even answer phone after hours..have to wait for state trooper…). Do you know how laughable you sound to us when you say stand around and do nothing and let law enforcement handle it? Come live here and see if that’s what you would do! So as you pooh pooh what this woman did, and trivialize the acts of a trespassing man with matches but no cigarettes during a statewide arson spree in the middle of a seriously dangerous fire season, her neighbors consider her a shining example of courage and strength, and know her “citizen’s arrest” very likely stopped another out of control wildfire.

I live in neighboring Jackson County and completely understand about the domestic terrorism acts Southern Oregon Citizen is referring to. Last September we lost two complete cities to wildfire and at the same time another wildfire broke out which threatened the rural city I live in which evacuated our entire town. Welcome Looters! Our Law Enforcement were taxed to the max for days stressing every resource in a good 40 mile path . The entire state seemed to have wildfires popping up. Here in So Oregon, there were others that citizens detained along the Interstate freeway that were caught starting fires. So that was not an isolated incident in our “neck of the woods”.

unfortunately, whenever we have had to call Law enforcement …the bad guys are long gone before they can get there….it took 3 of us to hold down the fella we caught in our house …BUT as you say the use of deadly force is to stop it from occurring against you ….the last thing any normal person should ever do is shoot someone