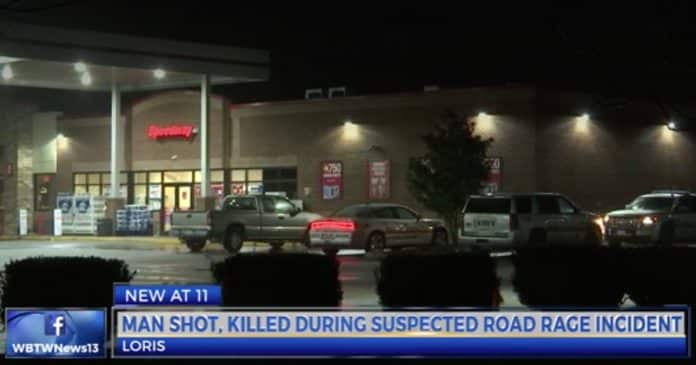 A South Carolina man pulled his truck up to a gas pump around 5:30 PM last Thursday. Another truck pulled in right behind him and the man driving got out armed with a knife and approaches the first truck. He then opened the door of the first truck and presumably threatened the driver who fired one shot in self-defense. The 34-year-old man with the knife did not survive the injury.

Police say the incident may have occurred because of a case of road rage.

Read More: How You Should Deal with Road Rage

I’m sure we’ve all wondered out loud about why some drivers do what they do. Yes, some are overly aggressive but most are just carelessly not paying enough attention. But no matter what bone-headed move someone makes out there be a defensive driver and let it go. No perceived offense out on the road is worth dying over.

We will likely never know what enraged the driver of the second truck to the point where he felt that opening the door of the first truck and brandishing a knife to the driver was somehow going to bring him some sense of satisfaction but we do know that rage cost him his life.

Presenting a knife to a seated driver inside an open door is most certainly a deadly force threat especially if the driver is still belted in and if he turned the engine off right away. A knife within an arm’s length or so in that situation is about as imminent as it gets.

Did the first driver see the man coming with the knife? Did that give him time to get his gun out? If so, couldn’t he have just driven away? Or just locked his door? Was he caught off guard when his door was suddenly opened by the second driver? Did he draw only after he saw the knife? Was he unaware that there was an angry driver behind him? Was there any other way he could have avoided this attack?

While at first look this appears to be a pretty straight-up self-defense case, these are the kinds of questions that investigators are likely to ask. This is why it is so important to avoid the fight if you can.