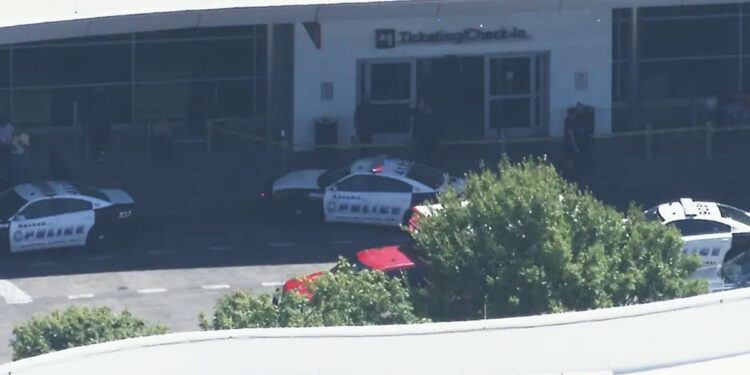 This info is just coming in from a press conference from the Dallas PD, which is embedded below.

Around 10:59 AM, a 37-year-old woman was dropped off at Dallas Love Field Airport. She walked inside by the Southwest ticket counters. She went into a bathroom, changed her clothing, and put on a hoodie.

As she came out, there was a police officer nearby when she produced a handgun and started firing. It seems she was aiming at the ceiling. The police offered fired at the suspect, hit her in the lower extremities wounding her, and took her into custody.

No other people were injured other than the suspect, and this is no longer an active situation.

Thankfully there was an armed police officer to stop the threat before she got the chance to actually shoot anyone if that’s what her plan was.

One report states that she was upset about her husband getting fired.

“We were at the counter checking in, and I was trying to check in, and we heard someone yelling. And we looked up, and we saw her walking down with guns up. And after talking with someone else, she was upset because her husband had got fired from somewhere and she was gonna start shooting us. And then the police came in, and apparently, she’s been injured, is what I was told,” she said via FOX4 News.

We will be keeping our eye out for more info as it comes out.

– Woman began firing handgun; unclear where she was aiming.
– Officer engaged suspect, who has been hospitalized.
– No one besides suspect was injured.
– Not an active situation.https://t.co/7SgVTIE0iy pic.twitter.com/RkhnaQZHpl

@DallasLoveField what just happened? A group of people were running and yelling “run” and we all immediately took cover. Nothing has been communicated to us. Everything seems to be calm now. It was most certainly a scary experience for all. @SouthwestAir pic.twitter.com/zU7QLhFV4C

Tow Truck Driver Gets Into Shootout After Man Brandishes Gun

Tow Truck Driver Gets Into Shootout After Man Brandishes Gun