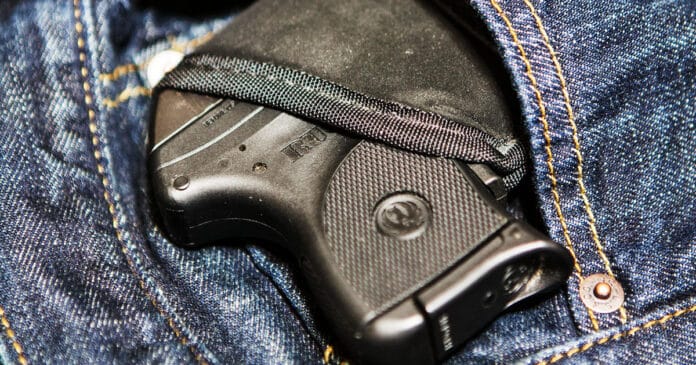 47-year-old John Frame choked and threatened a woman that he would kill her before she shot and killed him.

The incident occurred around 1 A.M. on June 19 outside of a West Virginia residence, where deputies state Frame struck the woman on the back and kicked her while she was on the ground.

According to a press release

“The female was able to draw a small handgun from her pocket shooting Frame one time in the chest.”

Frame fell to the ground and the woman called 911 while attempting to render aid to the attacker, who was pronounced dead by Lewis County EMS arrival.

Here displayed is the importance of having a self-defense skillset. The woman thankfully was armed and able to obtain her firearm while suffering. Along with defensive firearm skills, it helps to have quick access to your firearm, as it can only be imagined what would have happened if the woman continued to be choked without her firearm ready.

Also, it would be interesting to know if the woman possibly uses a pocket holster or none at all. If so, what can be said about them here? How much safety or risk is there carrying a firearm in your pocket? This method of carrying can be dangerous if not using a proper holster.

What’s interesting to note as well is how the woman rendered aid to her attacker. Yes, as a concealed carrier, it helps to have something like a tourniquet or at least the ability to know what to do when it comes to first aid. Still, did she help him because she knew him? Is this a case of domestic violence? The Sheriff’s County says the investigation remains ongoing.

Report the facts, leave the speculation and commentary for an opinion piece.

Well, consider our articles opinion pieces then. We give our commentary on the stories we cover.

Good for her! But why render aid to your attacker? Let him die.

Whatever the conditions of her carry, the fact remains; she successfully defended herself. All of the chatter about holsters, methods, whether she knew the perp are meaningless. She survived by having a so called “mouse gun” in her possession, and was able to deploy it and stop the threat with a single shot.

The reporter doesn’t know the caliber so we don’t know if it was a “mouse gun”.

I carry a 9mm revolver in my pocket from time to time.

I carry the Taurus Curve .380 in my pocket frequently when deep concealment is required. No holster, no problem.

As for a tourniquet, where do you suggest she put one for a chest wound? Around the neck?