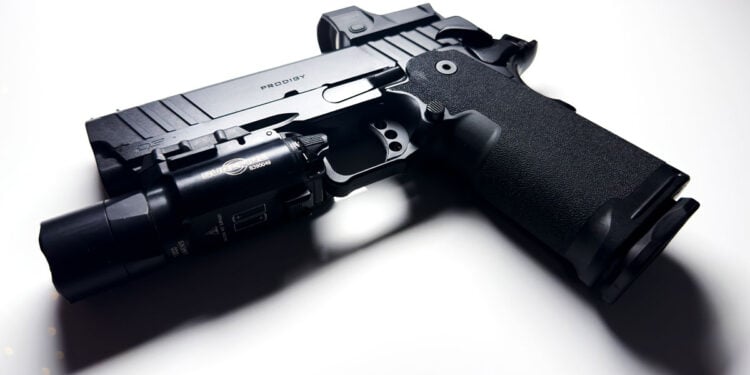 I find the firearms industry endlessly amusing for this simple fact: every few years, a new generation of shooters think they are cutting edge with some newly adopted technology or technique, yet those who study the history of the craft realize that the current hotness was the hotness about fifteen years ago, only to be abandoned at that time for the newest shiny object. As of this writing, the 1911 platform pistol, particularly the so-called “2011” double stack variants chambered in 9mm, are all the hotness. Suddenly, all the kids love the 1911 again, although in the past several decades proceeding this new-found love, all the cool kids sneered at the 1911, favoring striker-fired guns with lights on them. Interesting.

Apparently, a few modern “influencers” have realized that the 1911/2011 pattern trigger is actually more shootable than any striker-fired gun (those of us who have been around for more than a week already knew this), and now 1911s are all the rage among the appendix carrying, weapon-mounted light, cool kids. For the record, I carry appendix carry, too, though I don’t keep a mounted light on my carry gun. Still, you likely get my point. I have no objection to a new-found appreciation of the wonderful 1911 platform, but I do have a problem with all the new self-proclaimed 1911 experts, the ones who previously thought that Glocks were the only gun made. To clarify, I carry a Glock, but I always knew that they make other guns, too.

Ok, here is the deal; everyone who is actually a 1911 expert has been carrying and shooting them all along; two years ago, when every cool kid had a stippled Glock 19 in his holster, the 1911 guy was already using his 1911. Now the stippled-Glock cool kid is using his new 2011 STI or Springfield Prodigy. However, the cool kid who just switched platforms IS NOT a 1911/2011 expert like the guy who was using “old slab sides” for the past three decades. Sorry.

Storytime; I switched to the Glock 19/26 platform about twelve years ago and never looked back, and this remains my primary pistol platform. However, prior to that, I carried and shot 1911 pistols exclusively for a decade. So, I know the 1911 platform well, and I seek to offer some cautious considerations to the cool kids who just discovered that this platform exists, even though it is now one-hundred-and-eleven years old. Yes, it shoots better than any striker-fired gun, but again, all the old guys already knew that. The people who always prioritized the best ergonomics and best trigger in the handgun world have always been shooting the 1911. Your new discovery is cool, welcome to the club.

However, there is a reason that most shooters, many of which who were die-hard 1911 fans, embraced the polymer-frame, striker-fired handgun decades ago. The same will happen again, and the cool kids will eventually kick the 1911 to the curb, again leaving only the true 1911 gurus to embrace the best trigger known to man.

I abandoned the 1911 for two reasons: maintenance and weight. As an example, a Glock 19, fully loaded with fifteen rounds of 9mm, still weighs a pound less than a steel frame 1911 loaded with eight rounds of 45 ACP. For people who actually carry all day, that matters. Second, back when I carried all-steel 1911s, I found that I had to routinely remove the grip panels and lube the entire gun, otherwise, it would have rust all over it within three days of carrying in the southern heat and humidity. A polymer-framed gun needs a quick wipe with a rag on the slide once a week to avoid rust, that’s it. Finally, I got to the point where I wanted to spend the time I had to devote to the gun, shooting it and training with it, not maintaining it. The 1911 can certainly be reliable, but it requires more maintenance. Even top shelf-guns, while reliable, need maintenance more often and need more customized parts and fitting than do modern striker-fired guns.

Does this mean that you should not like 1911s? Of course not. In fact, I still love the 1911, but I stick to the opinion that it is a gun only geared well for the enthusiast who is willing to put in the maintenance to reap the rewards of the trigger and ergonomics that the gun offers. This, again, brings me back to the point that those who have been true 1911 gurus have been so all along. The relatively few shooters who, for the past two decades, come to competition matches with 1911s, or show up at training classes with 1911s, are the real 1911 guys who know all the intricacies of the gun and the higher maintenance demand. The new kids, with their double-stack 2011s, might be in for a rude awakening.

So, after criticizing the endless fads of the gun world, I will end on a constructive note; if you are a cool kid who just adopted the 1911/2011 platform, and you determine that it is not just your fad of the week, but something you will stick to, I think that is great as I love seeing THE AMERICAN HANDGUN live on and prosper. However, just be prepared for the more demanding maintenance the gun requires. At least with traditionally built 1911s, you need to replace recoil springs about every fifteen hundred rounds. Extractors need to be periodically replaced and/or tensioned. Replacing any internal part usually requires fitting, so become a good gunsmith yourself or find one. Also, the Achilles Heel of the 1911 platform is the magazine, and good quality mags are a must to have a reliable 1911. In my experience, the best 1911 magazines are Wilson Combat and Chip McCormack, and they are not cheap.

If you are willing to invest in the maintenance and upkeep, the 1911/2011 platform is the best shooting pistol. However, if you are like me and prefer minimal maintenance, maximum reliability, and one less thing to worry about, stick with your striker-fired, plastic-fantastic. That is what I will be doing.

Your comments were right on the money. Weight and rust were problems that plagued my choice of a steel 1911. I solved this by getting a Ruger lightweight commander. Less weight, and no rust issues.

Thoughtful article.
You raise some cons about a carrying a traditional 1911 platform.

I will offer some counter point. Not trendy and I have never ridden the “what’s cool” train.

Upon what factors do I base my opinion below?

I have carried a Colt Officers .45 ACP as an EDC since Bush was President. Interspersed with the Officers on occasion is a full size Government Model or a Commander. Each of these is all steel and chambered for .45ACP. That is what I am carrying right now. I carry ALWAYS. I promised Tom Givens that I would not to be a forfeit; if I am wearing trousers, I am wearing a pistol. 95% of the time, that means one of my 1911’s.

I am not a one-trick pony or a zealot. I own 4 Glocks as well as other designs and action types. I am a professional firearms trainer and can shoot plastic guns too; if I am training people who carry striker fired plastic ,then I carry a Glock too. But my preference, on my own time – 1911.

On to my comments.

Why .45 ACP? Bullets make holes; that is all they do. In engineering school I learned that a.452 inch hole is bigger than .355 inch hole. Bigger holes are, well, bigger. Bigger holes have more chance of hitting something important in the cardio-pulmonary hydraulic system – High Center Mass target area. With modern hollow points properly functioning, 9mm can certainly expand a lot , perhaps to circa 0.60 inch. That is a fairly big hole. On the other hand, a good .45 hollow point such as Federal HST can expand to around 0.90 inch. On the other hand, if the hollow point bullet does NOT properly expand, it simply acts like ball ammunition. The un expanded bullet makes a bigger hole which still helps let more air in and blood out. A bigger hole produces more “target effect”. Which is what you need to keep your opponent from killing you.

Please note that I am not knocking modern 9mm Parabellum, just explaining my preference for .45 ACP.

Why do I prefer a steel frame? I can shoot a steel frame gun faster than a lightweight one. This is personal preference. The Laws of Physics mean that heavier guns kick less. The recoil stroke is less and the sights are back on target quicker.

But 9mm has more capacity you say? Yes . The single stack 1911 platform is only 7 + 1 rounds of .45 ACP in a compact and the full size only gives you 8 + 1. Is this really a significant draw back? A reload if needed is simple, and I learned how to do that when I was 8 years old. Plus- in most cases , the difference is irrelevant. The sad fact l have learned and seen demonstrated often is that for many shooters, including Officer Friendly at your local PD, in a gunfight the contents of a double stack standard capacity mag are often just devoted to additional misses.

Your blued steel 1911 platform needs regular maintenance because it can rust? That is a true statement.

We are not limited to blued steel these days. I carry the same gun summer and winter, in Texas, inside the waistband. In the summer, especially, I sweat. A stainless steel pistol, or a coating of RoGuard or NP3 ( no longer available unless you are NASA), a brushed hard chrome finish or melonite or Wilson Armortuff or something similar from Accurate Plating and Weaponry will solve that problem, permanently. Plastic frames and melonite coated stainless steel slides certainly do require less maintenance. I use the above coatings to solve the problem on my guns.

An additional observation regarding appendix carry.

Appendix is a viable technique and can be VERY fast. On the other hand, it requires training and discipline and consistent un-natural body movements in order to be performed safely. Failure to safely perform an appendix carry draw can produce a disastrous event. As I mentioned, trends come and go and I am not trendy. I prefer IWB at 3 o’clock with a quality horsehide leather holster. It provides good concealment, all day comfort, a sound foundation for a rapid draw from concealment and does not point at my body parts.

Of course, in the end, any person must make choices that work best for them.