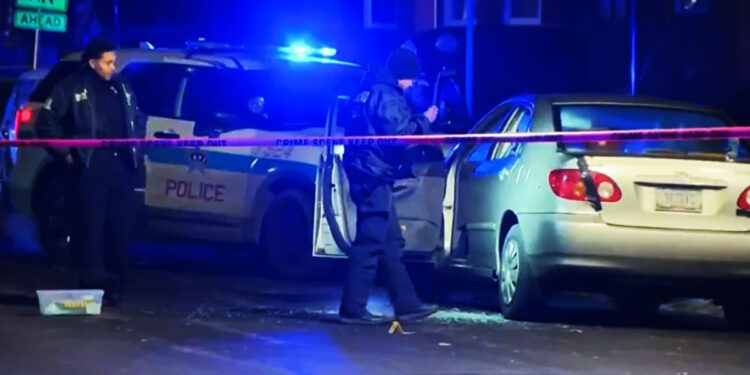 Four men got out of a black car around 2 AM Wednesday and went up to a 23-year-old female in her parked car. One attacker had a handgun and tried to open the victim’s car door. The 23-year-old female was a concealed carry license (CCL) holder and shot one of her attackers in the head.

Police did not say how many shots she got off, but coincidentally, a man was found in a stolen black Kia just a few miles away not long after. He had been shot in the chest and died at the hospital, but the Chicago Police Department did not say if the two shootings were related. It will be interesting to find out if his fatal gunshot was from her firearm.

Four against one is terrible odds, and the fact she was sitting in her car makes it even worse. She was not only at a disadvantage because of the numbers, but they had her cornered, with nowhere to go. There was a lot of glass on the ground outside of her car, but it looks like it may have come from the back passenger’s side. There is what might be a bullet hole in the back passenger’s side between the wheel well and the brake light. I say “might” because of the size of the hole, and there is a lot of other damage on the car that came from something besides the incident.

There are at least eleven spots where there appear to be bullet casings marked on the ground. Only one of those is close to the car, and the other casings are grouped further away. Shooting from a vehicle is not something most people get the opportunity to practice, but I can tell you it is a unique experience. A good place to get a chance to shoot from some unusual positions is through an International Defensive Pistol Association (IDPA) or an United States Practical Shooting Association (USPSA) match. Competing may not be your thing, but the experience you can gain may save your life.

I’d assume that a ballistic match is in the works to see if she also got the other perp in the stolen Kia.