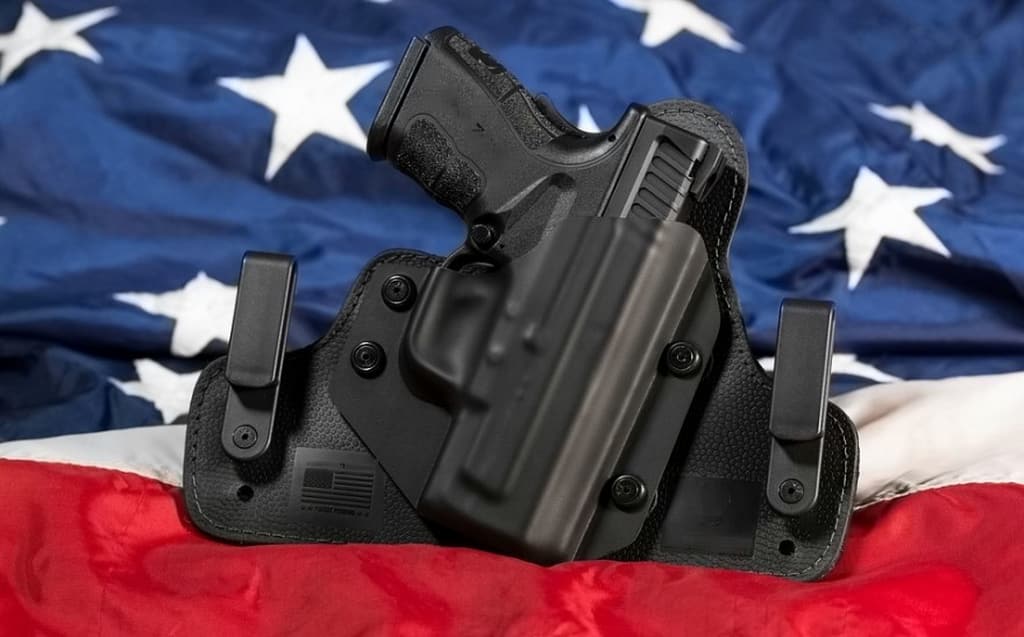 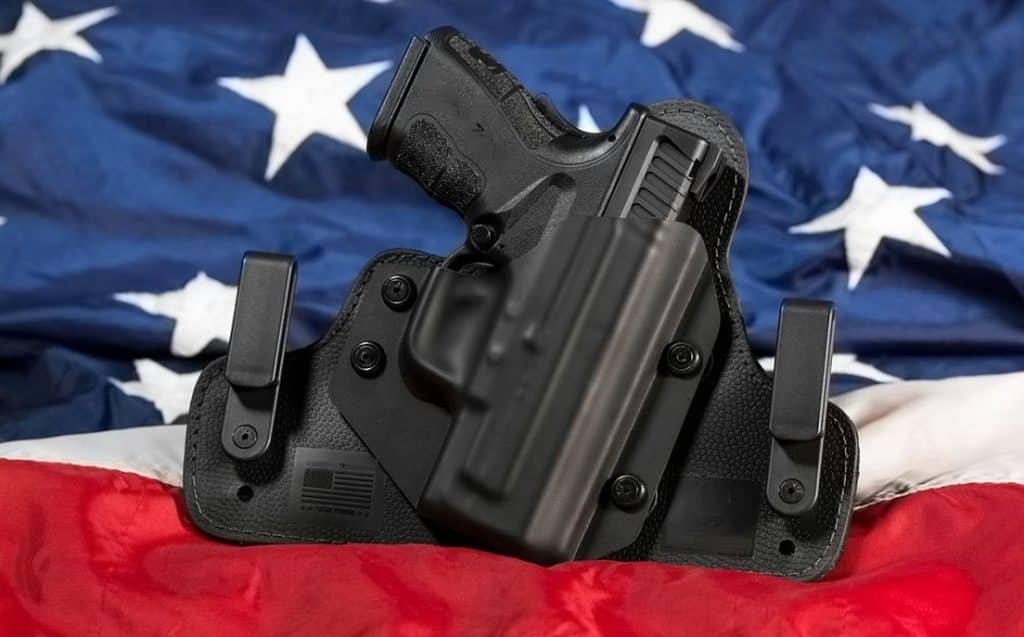 Every state in the United States now has a legal procedure which allows its residents to lawfully carry a concealed handgun in public for self defense. National reciprocity already exists in the 22 states that recognize all other concealed carry licenses or permits or allow law-abiding non-residents to carry a firearm without a license. In states that do require a permit/license to carry, training standards vary. I understand that 24 states now will issue permits/licenses without requiring an applicant to press the trigger and demonstrate proficiency with a handgun. Ten states now do not require a permit/license for concealed carry (permitless carry), e.g. ID, MS, MO, WV, AL, AZ, KS, ME, VT, and WY. My state of Florida requires demonstration of proficiency with a handgun, in addition to other requirements. Certain states require applicants to show a specific need for obtaining a concealed carry permit/license, i.e. CA, NY, NJ, MA, MD, DE, HI. Our training group even had a CA student fly to our Florida location for our concealed carry training. So this law would force those states to honor permits/licenses from states with few restrictions on obtaining one. Some states force lawful concealed carriers to surrender their rights when traveling through their states. While this is rapidly changing, at last count there are 10 states that refuse to recognize and grant credit to the licenses/permits of other states, forcing lawful carriers to surrender their rights when traveling there. It happens regularly: accidental criminals, seized guns and property, and legal prosecution in one jurisdiction for something that other states permit. A lot of variability, interpretations, extraneous requirements, and frequent changes and updates. So be aware of the timing and regularly check for current status and laws.

This month, Representative Richard Hudson (R-N.C.) introduced H.R. 38 — “The Concealed Carry Reciprocity Act of 2017” — on the first day in session for the 115th Congress of 2017. Briefly, this bill would authorize people who have a valid concealed handgun license and who are not otherwise prohibited from owning a firearm to carry a concealed handgun in any state (territory and Washington, DC) that permits concealed carry. However, they would still have to follow the rules and regulations for the state or jurisdiction they are visiting when carrying a concealed handgun. Currently, law-abiding gun owners wishing to carry a concealed handgun in another state must first understand and follow complex and different state reciprocity agreements. The concern is that this can be very difficult, time-consuming, filled with legalize terminology and interpretations, and honest mistakes can be easily made with significant costs, and possibly incarceration, resulting for otherwise lawful and well-intentioned folks. Several innocents have been issued shiny new steel bracelets.

Now some states forbid out-of-state residents from concealed carry within their borders, or only recognize permits/licenses from selected states. You probably recall the law-abiding Pennsylvania woman with a valid concealed carry license there who was arrested after driving into New Jersey. She was pulled over for a minor traffic violation and happened to casually mention her .38 caliber revolver concealed in her purse and proudly showed her Pennsylvania permit. She was arrested and faced felony charges and a prison term because she was unaware that it was illegal to carry her handgun in New Jersey, while legal in Pennsylvania. After much delay, costs, and procedures, she was pardoned by Governor Chris Christie. The proposed Concealed Carry Reciprocity Act of 2017 aims to prevent future incidents like this.

To me, it is like our driver’s licenses. After I meet the Florida requirements and get my Florida driver’s license, it is recognized by all the 50 states. It is like this in other states. The same applies to marriage licenses. Why should getting and using a concealed carry handgun license or permit be any different? Just like the privileges to drive and to marry, the Second Amendment right should not disappear when crossing a state line. This proposed law allows people with a state-issued concealed carry license or permit to conceal a handgun in any other state that ALLOWS concealed carry. Individuals would be allowed to do so under conditions that the license/permit holder must abide by laws of the state/local jurisdiction. Also, it is my understanding that it does recognize the existing “Constitutional Carry” (permitless carry) right granted in ten states (I mentioned them in the introduction here) to concealed carry firearms without a permit/license and without receiving any training from a state government. Some take issue with the “without state training.”

Another issue for some suggests that the states will not have a role over who, where and how concealed carry guns can be carried. It’s my understanding that this bill would still keep in tact any prohibitions and regulations for certain people already banned under Federal law from buying or carrying a gun. Another issue for some is that this bill seems to allow folks to get a concealed carry permit/license from any state (not just the state where they reside) and then carry a concealed handgun in ANY other state. This would permit residents of strict concealed carry states like California and New York to obtain a license from a state like Utah (which generally seems to issue permits more freely) and then legally carry in their home state. Some think this is a good provision, while others think the opposite.

What about the “Gun-Free School Zones Act of 1990?” Recognize that there is a provision in the new bill for states which says that a person who carries a concealed handgun is not subject to the prohibitions of Section 922(q) of the U.S. Code. Section 922(q), the “Gun-Free School Zones Act of 1990.”  Currently, this Federal law prohibits people from carrying firearms in schools or school zones. I am still investigating this bill, but it is my understanding at this time that this bill would eliminate “Gun-Free Zones” in schools by allowing those with concealed carry permits/licenses to carry there and not being subject to the ban.

To many, this bill eliminates complexity, confusion, and accidental criminals due to the many present varying and complex laws, while ensuring states still have a say over who, where, and how concealed carry guns can be carried. It merely recognizes the diversity of existing state concealed carry laws by making each person subject to the concealed carry laws of the state where they are present, including certain places off-limits to firearms and laws governing defensive use of force. It simply allows out-of-state permittees/licensees to concealed carry the same way in-state residents already do. This proposed new law has nothing to do with arming and helping criminals. They already carry on our streets in violation of laws. But without a doubt, anti-gun groups are going to challenge this bill and if nothing else try to water-down some of its provisions. Christopher Cox, NRA lobbyist, said “Law-abiding citizens should be able to exercise their fundamental right to self-defense while traveling across state lines.”

Under the Trump administration, the time seems to be optimal for this bill to pass, but there are still uncertainties. Representative Hudson’s new bipartisan bill has been referred by the House Judiciary Committee to the subcommittee on Crime, Terrorism, Homeland Security, and Investigations and already has 77 co-sponsors, but needs several more. The Concealed Carry Reciprocity Act of 2017 is well-meaning and has a chance, but your help is needed. Contact your members of Congress soon. You can call the Congressional Switchboard at 202-224-3121 and ask to be connected with your Senator and Representative.

© 2017 Col Benjamin Findley. All Rights Reserved. This article may not be reprinted or reproduced in whole or in part by mechanical means, photocopying, electronic reproduction, scanning, or any other means without prior written permission. For copyright information, contact Col Ben Findley at [email protected].