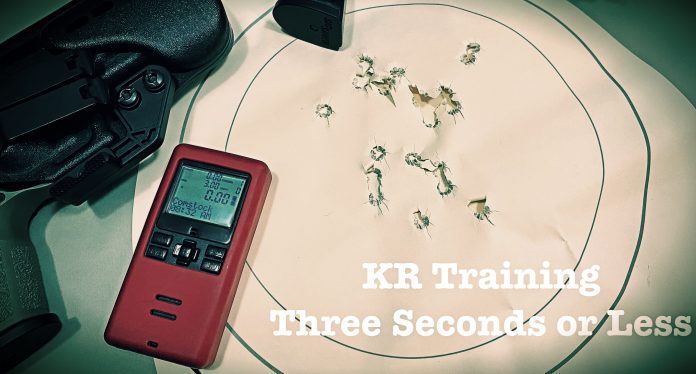 If your year or so has been like mine, you haven’t been doing much live fire with handguns. While I would like to believe that I am just as good with a handgun now as I was a year or so ago, I know better. Shooting is a perishable skill, and ammo has been hard enough to find, or expensive enough when found, that keeping pace with what I was doing a year ago just isn’t possible. I usually don’t do “minimum acceptable standard” stuff, but I think I may start making an exception. KR Training out of Texas has a good course of fire called 3 Seconds or Less that is quick, doesn’t require much ammo to shoot, logistically easy to pull off, and hits some key skill areas. As a bare minimum, it would be a good place to start.

The original premise of the course of fire is based on the notion that the “average” self-defense gun use occurs at 3 yards and lasts about 3 seconds. Every string of fire has a 3 second par time. This makes timekeeping rather easy and there are actually audio files available at the KR Training blog so that this can be done without a shot timer.

The total number of rounds fired is 20. There are a couple of proprietary KR Training targets that the course is intended to be shot on, but an IDPA target is considered an acceptable stand-in.

Editors Note: You can download and print the KR Training target on 11″x17″ paper here.

The hits are assessed a point value based on where they land. Inside the -0, they are worth 5 points. In the -1, they are worth 3 points. Passing is considered to be 80% or better. The course is designed so that an IDPA sharpshooter-level shooter should be able to get by without much trouble.

Even though I found the course of fire rather easy, I think there is value here if we understand what the test is supposed to be. This is a well-rounded minimum standard that is actually a reasonable minimum standard. Many state-mandated courses of fire required for a concealed carry permit are simply too easy. Many law enforcement qualifications are the same if we are honest. KR Training’s 3 Seconds or Less is only a little harder but is also much more rounded. It hits offline movement, use of headshots, shooting on the move, turning into a threat, one-handed shooting with either hand and the back half of a reload. That is quite the menu for only 20 rounds worth of shooting. At the same time, it is quick to shoot, not resource intense, and not so difficult as to be unreachable by a shooter who is relatively new to standards-based training.

If someone’s skill level allows them to easily meet the standard, I think it is easy enough to spice up the strings of fire if that is something someone wanted to do. Either reduce the target size or reduce the par time if it just has to be harder. A 3”x5” index card for the body, and a 2” circle for the head would do nicely to really up that game. You know, if someone wanted to do that.

Editors Note: KR Training posted in the comments that the best way to make the drill more difficult is not to make the target smaller, but to start every string from concealed/holstered (instead of starting some strings with hand on gun), and then reduce the par time to 2.5 or even 2.0 seconds.

If you haven’t been shooting much handgun, like me, go give this one a try. The round count is low, the strings of fire are useful beyond just being part of a test. Maybe even take a couple of guns and compare notes. If you give it a try, let us know how it goes in the comments.

What does a KR target look like, how do I get one.

In your lead up to the drill you mention -0 and -1. What do those numbers mean/represent?

Thanks. Looking forward to trying the drill.

You can download the PDF file here. Print on 11×17 paper. https://blog.krtraining.com/the-krt-target-series/

The best way to make the drill more difficult is not to make the target smaller, but to start every string from concealed/holstered (instead of starting some strings with hand on gun), and then reduce the par time to 2.5 or even 2.0 seconds.

Why that did not pop into my head is beyond me. It is a good course of fire. I enjoyed it.

I just added a link to it in the article. Thanks!

the one issue I see with these types of drills is that most gun ranges will not allow persons to draw a loaded weapon or to start with the weapon facing any direction but down range. It would be good to have a database that shows the ranges where this type of shooting is acceptable.