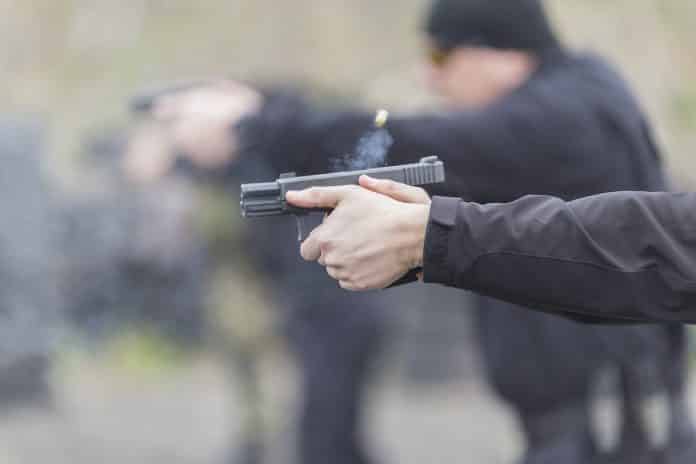 There are dozens, if not hundreds of shooting drills out there for almost any purpose. There are shooting drills for handguns, rifles, shotguns, and some for multiple firearm types at once.

Many are excellent for working and keeping basic skills up, essentially foundation exercises like squats, deadlifts, and bench presses.

But how do we set our baseline of minimum standards? In other words, you need to figure out just how hopeless you are or the weaknesses you need to work on.

Here are three to get you started. You’ll need a target stand, a target, some ammunition (DUH), and a shot timer. Each of these drills will give you an idea of what you’re already good at, but also where you have room for improvement, so they make excellent checkup exercises for periodically gauging your progress.

Ken Hackathorn’s Wizard Drill is a great baseline exercise. Nothing it requires you to do is fantastically complicated, and you can shoot it in a couple of minutes. While simple, it isn’t necessarily easy.

The drill is shot from 3, 5, 7, and 10 yards, with a course of fire of five total rounds using your carry ammunition, with every stage shot from the holster. The first three shots are headshots, with a pair to the body on the final stage. All stages are done in 2.5 seconds, and the target used is the standard IDPA silhouette.

It seems simple, but it’s deceptive. The wizard drill is not terrifically difficult if your fundamentals are solid. For seasoned shooters, it’s probably not that big of a deal, merely stretching the legs, so to speak.

But if you’re just starting to build those defensive shooting skills or don’t train much…you might be in for a shock.

The FBI Qualification gives you a course of fire using multiple skills, including strong and weak-hand shooting, emergency reloads and shooting at a mix of distances. It is literally the test that the FBI uses to see if their agents can actually use their sidearm. It’s a bit more than a “drill,” but it’s fast enough to shoot that you can use it as a cold-start exercise.

Every stage is shot from concealment, with several courses of fire at 3, 5, 7, 15, and 25 yards. Overall, it’s a 60-round course of fire, so you’ll need one box plus 10 more. The FBI uses the QIT-99 target, which is a bottle-style silhouette. Hits must be totally inside the bottle; anything outside of it doesn’t count. 80 percent or better is a pass.

Not only is the Bill Wilson 5×5 Drill a great checkup for overall proficiency, but it’s also used as the classification test by the IDPA. This shooting drill uses an IDPA target at 10 yards, with four strings of fire for a total of 25 shots. All strings are shot from the holster.

Much like the FBI qualification, the 5×5 drill tests most aspects of defensive shooting skills, including drawing and firing, shooting with only the weak-hand, emergency reloads, and also having to switch to a headshot when shots to the body are failing to stop the threat.

Scoring is your raw time, plus penalties using the Limited Vickers scoring system. Any shots in the -1 area of the IDPA silhouette adds 0.5 seconds, and any shots in the -3 area add 1.5 seconds. Miss the target entirely, add 2.5 seconds.

If you use Bill Wilson’s ranking system, 50 seconds or more is insufficiently proficient to even carry a handgun. Shooting the drill in 20 seconds is Master-level…and that’s not easy. In the video above, Massad Ayoob doesn’t quite get there, and when it comes to defensive shooting…he literally wrote the book.