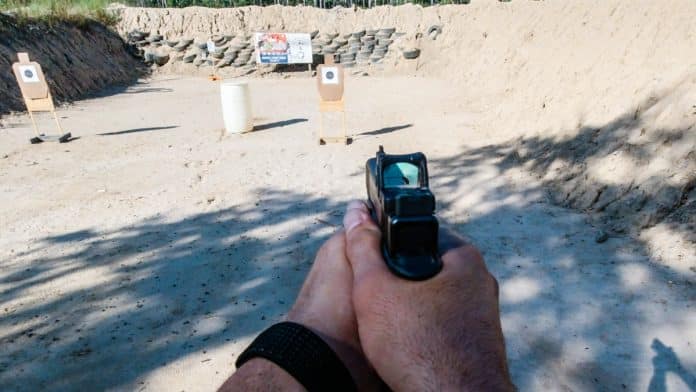 There are a lot of shooting drills out there. Some are more appropriate than others for the concealed carrier, as some are clearly more for the competitive shooters. Others are really good for both.

What you want in a shooting drill for self-defense is a test of all aspects of defensive pistol use — namely, the draw, sight acquisition, trigger press, and completing the exercise under time constraints.

Here are five such drills that are excellent exercises for precisely this purpose. Granted, none are perfect…but all have value. Each would make an excellent cold drill to gauge progress.

Oh, and keep dry-firing while you’re at it.

Ken Hackathorn’s Wizard Drill is short and sweet. But it’s anything but easy. It consists of four stages, with one shot fired in each of the first three stages and two shots in the last stage. He encourages you to use the ammunition you carry on a daily basis, which is a pretty good idea.

Each stage is shot from the holster, and in concealment and uses an IDPA silhouette target. A shot timer is required, and the time limit is 2.5 seconds per stage.

The drill is pass/fail. Miss a headshot completely, and you fail the drill. Drop more than two points (meaning up to two shots in the -1 zones), and you fail. Go over time? Fail.

The Bill Drill is pretty darned simple, six shots from the holster from 7 yards and timed. According to legend, it was invented by Bill Wilson, founder of Wilson Combat, and a serious competition shooter.

Ideally, you want to use an IPSC or IDPA target, with all six shots in the A zone or 0 zone. You could use an NRA or other bullseye targets if desired.

Anything outside the target zone drops 1 second of time. Bill Wilson considers 3 seconds to be a good par time for an experienced shooter, so anything over 5 seconds likely indicates the shooter needs some work.

The Bill Drill is deceptive since you have to draw, acquire a sight picture and fire and then put five more rounds on target. Recoil control after one shot is easy. After a few more, it gets a bit more difficult.

The El Presidente Drill, developed by Jeff Cooper, adds target transition and reloading to a draw and shoot drill. You need three silhouette targets, though bullseye targets could be substituted if you needed to. It’s timed, with 10 seconds being a par time and any shot outside the target zone deducting a point.

You start with the pistol holstered with your back to the targets from 7 yards. On the buzzer, you turn, draw and fire a controlled pair into each target working from left to right. Perform a reload, and then do the same from right to left.

Mozambique Drill From The Holster

The Mozambique Drill, Failure Drill or Failure To Stop Drill is another classic practical shooting exercise, taught all over the world. It was named by Jeff Cooper, who started teaching it after a mercenary acquaintance of his used a controlled pair followed by a headshot to dispatch an adversary. Police learn it, so it’s good for the civilian carrier.

Using a silhouette target at 7 yards, draw and fire a controlled pair to the body, followed by a headshot. If using a timer, 3.5 seconds is a good par time.

It’s a simple drill, but it has some nuances in that transitioning to the head under time constraints can give some shooters fits. If you miss the target zone – such as the A zone in an IPSC silhouette or the 0 zone of an IDPA target – add 1 second to your time.

The rest of these drills are bread-and-butter shooting drills. Think of them like foundation exercises like squats or deadlifts. You should do them to stay strong.

Dot Torture is more like a whole-body routine. It’s a 50-shot course of fire. You’ll need to print a dot torture target, which you can find here as well as elsewhere around the web. There’s no time limit on this one; you’re looking for performance rather than time.

Start at 3 yards. The target is 10 numbered 2-inch circles, with different courses of fire. It works like so:

The goal is to shoot it clean, with all 50 rounds inside the circles. Once you can do that regularly, move further away, switch to a smaller gun, or start adding time constraints.

There are plenty of other shooting drills out there. But these 5 are fantastic foundation exercises that will help you build and retain defensive shooting skills.

we shot the El Presidente twice yearly during our law enforcement qualifications. at the end of the year, each Department sent their best shooter to the El Presidente’ Competition. There were 24 shooters in all . I happened to win it twice back in the day. The only variation to this was we shot 13 rounds. A pie plate was used also , between the furthest left target and the middle target and that was your last shot . best time with most hits in kill zone including pie plate wins.