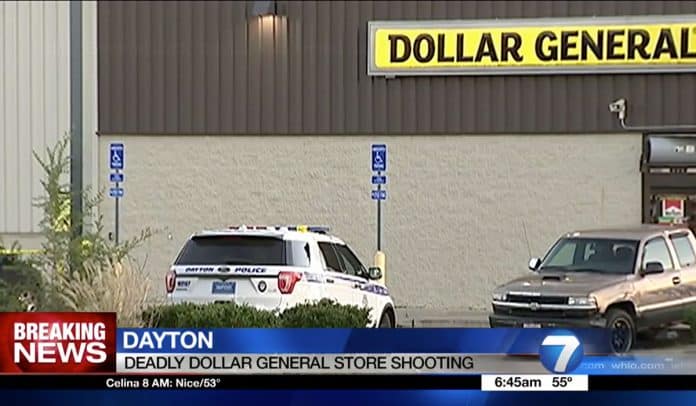 A criminal walked into the Dollar General on 2228 North Gettysburg Ave. in Dayton, Ohio around 6:30 PM this past Wednesday. Instead of shopping for items that cost only $1 he decided to try and rob the store of all its dollars.

This store had been targeted by criminals three times in the past twelve months making this the fourth robbery attempt. That’s probably why the clerk behind the counter decided to arm himself.

So when the suspect demanded money from the register, the clerk pulled his gun instead and fired at the robber. It is unclear how many shots the clerk took but hit the suspect at least once who then walked out the front door, collapsed and died on the spot. It is also unclear whether the suspect had his firearm out or not but police did find one on him.

One thing that caught my attention was the reporter wondering if the clerk was allowed to carry a gun at work. Now that wasn’t the first thing that crossed my mind when I was reading the story. But then I did a little digging. I came across a thread from the USA Carry Forums quoting a section of the Dollar General Employee Manual which stated:

The following are NOT a complete list but are illustrative of those offenses for which even the first offense may lead to performance counseling and/or termination from the Company:

Now, this thread was posted in 2013 so I wanted to see if this has been updated since then. Then I came across an article from thehill.com that stated Dollar General had not responded to them regarding their gun policies. But I did find a copy of their Employee Handbook which is dated Feb. 2015. I didn’t find the quote from the thread above but it does state under “Examples of Prohibited Conduct” that:

Notice the change in wording from “required by law” and “permitted by law”. I’m no lawyer but the way that reads to me is that is an employee has an Ohio License to Carry a Concealed Handgun, then they are “permitted by law” which means they should be able to carry at work. Open Carry is also legal in Ohio which I would think falls under the “permitted by law” as well. It wasn’t stated whether the employee had a license to carry or was open carrying. But I will be keeping my eye on this story to see if any more details emerge.

Earlier this week we reported on the new Concealed Carry Report from 2019 which estimates 18.66 million permit holders in the United States. That’s a lot of people out there taking their personal protection into their own hands. It sure is getting hard out there for criminals. They never know who has a gun and who doesn’t. Now make sure you are part of the group that has a gun.

So if you don’t have a concealed carry permit yet, go out and get one. Already have one or live in a Constitutional Carry state? Great. Now just make sure that you always carry!