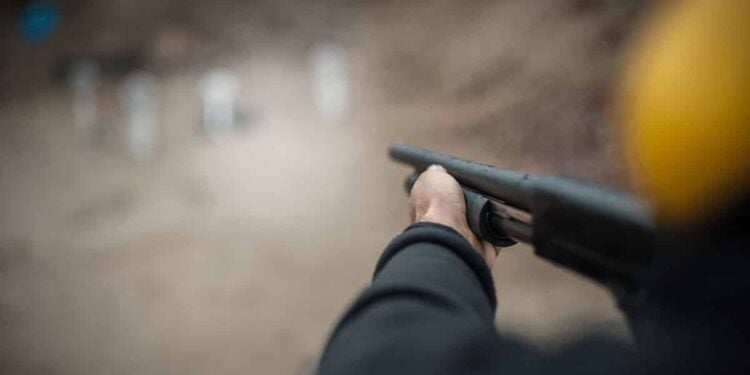 No, that cheap pump with a black synthetic stock is not necessarily one. No, a break-action isn’t either. Nor is a Shockwave or any gun like it.

Semi-auto is best, for the same reasons a Colt SAA makes a terrible carry gun. Why run a pump if you don’t have to?

A good fightin’ shotgun is also compact. You want the longer barrel in the duck blind or turkey woods, but it’s almost irrelevant ballistically and makes maneuvering difficult at home defense distances.

Ideally, you’d want a top rail and/or tapped receiver for mounting a red dot, as well as a rear sight. Increased capacity (meaning more than 5+1) is adequate, and so is the ability to accept chokes.

We don’t know when Remington will be back in business, so the 870 seems silly to mention. The Benelli M4 is just too obvious, so we’ll leave that off. So, with that in mind, what are some good choices? Here are 6 near-perfect home defense shotguns.

Stoeger is part of the Beretta/Benelli family, based in Turkey and making working person’s versions of Benelli shotguns. The M series is their version of Benelli’s inertia-driven semi-auto system, one of the standards by which modern shotguns are judged.

The Freedom Series shotguns are the defense models, with an 18.50-inch barrel. Sights are an adjustable rear peep sight aperture and fiber optic front sight, with a Weaver rail on the receiver. The magazine holds 7+1 of 2-¾” or 3″ 12-gauge.

The only real drawback is a fixed cylinder choke and a relative paucity of accessories such as railed forends…but they are out there. Some users find the lightest target loads don’t cycle as well, though common with inertia shotguns, and recoil shims are included with the gun.

Mossberg’s 930 semi-autos have several “tactical” or defense-oriented options; the one to acquire is the 930 Tactical 8 Shot SPX. Chambered for 12-gauge shells with an 8+1 capacity and with the accouterments you’d want in a fighting shotgun.

A ghost ring rear sight, fiber optic front sight, a top-mounted rail for a dot, and a shorter barrel (18.5 inches) for easier maneuverability.

Another selling point is Mossberg’s tang-mounted safety instead of basically every other brand’s crossbolt safety on the trigger guard. The stock and forend include standard sling swivels, so it’s ready to accept a strap. However, MSRP is a little steeper, starting at $960 for the standard stock and an eye-watering $1078 for the pistol grip.

A rifled pump gun after that intro? But hold on a second.

Some people prefer slugs over buckshot for home defense, and a good reason; it’s the closest you can get to an elephant gun, and with Foster slugs, it is a perfectly viable home defense weapon…so long as you don’t miss.

If you wanted to load slugs for home defense, which are absolutely devastating at close range…this would be an ideal platform for it.

TriStar Sporting Arms is a gun importer that specializes in Turkish guns offered at working person’s prices. The Raptor ATAC would be the best pick for home defense.

The Raptor ATAC is a gas-operated semi-auto made by Armsan in Turkey, which – having handled and fired a few of Armsan’s shotguns, I know this for a fact heavily based on the Remington 1100 system.

The ATAC is a 12-gauge with a 3-inch chamber and compatible with Mobil chokes (easily found) and ships with an extended Cylinder choke. The gun has a 20-inch barrel, with a rear ghost ring sight mounted to the Picatinny receiver rail and a front fiber optic.

The black synthetic stock includes a pistol grip. If there were anything to ding the gun on, it would be a 5+1 capacity. However, MSRP is $450. Having used several TriStar products…I would tell you that you get more than your money’s worth.

CZ’s shotguns are quietly regarded as solid working-class shotguns. The 712 is a bit less tactical, having only a fiber optic front sight and few other features to mention, but it’s a solid compact semi-auto shotgun from a good brand.

The gun comes with a full set of chokes (C, IC, M, IM, and F) and little else. There is a sling swivel on the stock, so you’d have to add one to the forend to put on a strap.

However, with an MSRP of $535 and street price likely under $500…it’s a solid semi-auto for the working class person.

If one insisted on a tactical pump, the Mossberg 590 Tactical M-LOK model would be the ticket.

The model to get would the #50693, a 3-inch 12-gauge with a ghost ring rear sight, blade front, 20-inch barrel, 8+1 extended magazine, and Mossberg’s tang-mounted safety. Plus, it has a heat shield, which makes it look like a trench gun, and that’s just cool as hell.

The forend has MLOK slots, so it’s ready for mounting a light. It accepts AccuChokes and comes with a cylinder choke installed. There are also sling swivels on the stock and the magazine tube cap, so it comes ready for a strap.

MSRP is $603, which is a bit stiff for a pump-action shotgun but as far as they go…it has more than enough bells and whistles to justify it.