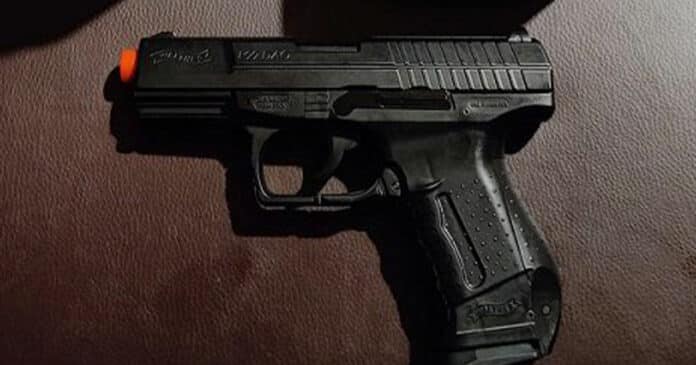 Some time ago, I put out the hypothesis that using an airsoft pistol of the correct design – meaning a gas-operated blowback gun, not a spring-powered Walmart special – is potentially a better dry fire practice tool than shooting your own gun.

So I bought one and started using it. I put in work, drawing and shooting the thing on a timer and with targets, in the hopes it would make me better at shooting my actual pistols.

…but not in the way I was hoping. However, I am absolutely convinced there really is something here.

The Original Goal With Shooting An Airsoft Pistol

So what I was hoping for was vertical progress or all the things you can measure getting better.

Reliable and regularly faster first shot times, faster splits, more accurate hits…but what it really did was reveal foundational weaknesses I didn’t even know I needed to correct.

To be fair, some of that happened. I did decrease split times shooting the airsoft gun (my initial splits were 0.4ish, now I can get 0.2s with it) and if I decrease my accuracy demands…I can put a first shot on target from strong-side concealment in less than 1.5 seconds. My fastest first shot, when warmed up, was 0.96.

In live fire? I can hit a silhouette target in maybe 1.8. Maybe 1.6 if I’m good and warmed up and get lucky. Cold? About 2 seconds, which kinda stinks.

In doing so, I’ve glimpsed potential, which is vital to investing yourself mentally in whatever you’re doing. However, what the airsoft shooting has REALLY done was show me where I was cocking things up. 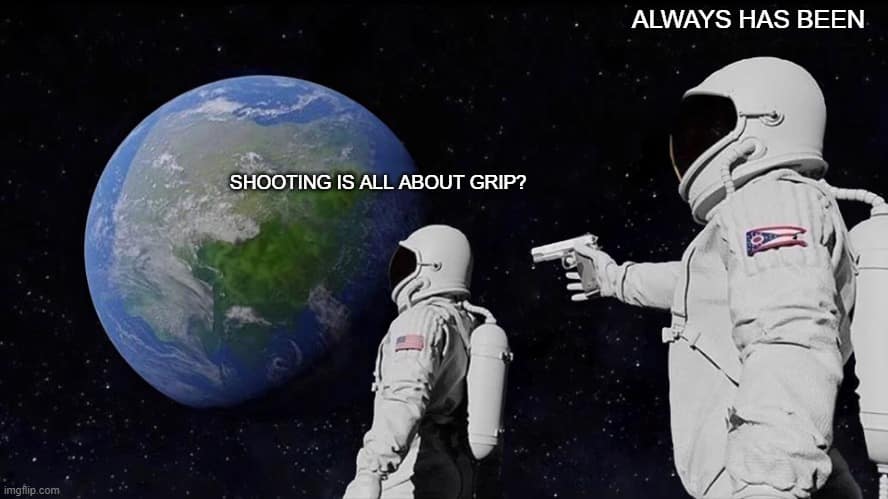 The more I shot, the more frustrated I got with accuracy issues until I started experimenting with how I was gripping the gun.

Now, before the comments section starts, there are scads, scores, and bounties of blog posts and magazine articles and videos that talk about gripping a handgun. Use lots of pressure, 80 percent this, and yada yada yada, but few (if any) tell you HOW to do it.

“Just grip the gun” is usually about it. THAT you should grip the gun, not HOW you should. And for someone trying to get better at something, that’s important information!

Where do you apply pressure? How is that pressure applied?

Do you wedge upward with the index finger of the support hand to keep the pistol stable, or use a clamshell-like squeeze? Or both? Does it matter if your support-hand thumb is on the frame? There’s the modern thumbs-forward grip that gets repeated like a mantra, but you’ll also find a lot of deviation from it too.

Occasionally, you will find an instructor or video or article that gives you some of that, but they’re few and far between. Most of the time, it’s just “grip big important” and that’s it.

Here are a few of the nuggets I ran across trying to learn a bit more on my own.

Brian Enos uses a thumbs-forward grip but doesn’t put his thumbs against the frame. He only uses pressure from the fingers.

Massad Ayoob, along with others, has talked about the importance of the wedge hold, pushing the support hand index finger up into the trigger guard to keep the hand stable. Or Pat Mac (briefly) talking about a clamshell grip on the gun.

The idea here is that if you’re trying to refine something, you need to learn about all the different elements that can be experimented with. Pressure, direction, position, etc.

Turns out that a lot of the above works really well, especially the clamshell-like squeeze with a wedge hold.

The point being, shooting the airsoft gun more and more allowed me to get attuned to a lackluster support hand grip. I also discovered squeezing the shooting hand pinkie helps a great deal with keeping the gun steady as well.

The Basic Premise Was Right: More Reps With An Airsoft Gun Is More Reps

My initial premise was spot on; shooting an airsoft pistol gives you more repetitions, at less cost, and with WAY more convenience than shooting live ammunition.

Shooting the airsoft pistol a bunch didn’t get me the results I wanted with a real gun on paper or on the timer, or at least hasn’t yet. What it DID do was get me more trigger time and that much more awareness of things I was doing wrong…so now I can work on them.

So would I tell anyone that airsoft pistols are the key to getting better? No, but it would appear that it is a perfectly valid tool that will probably help you if you’re trying to be a better shooter.