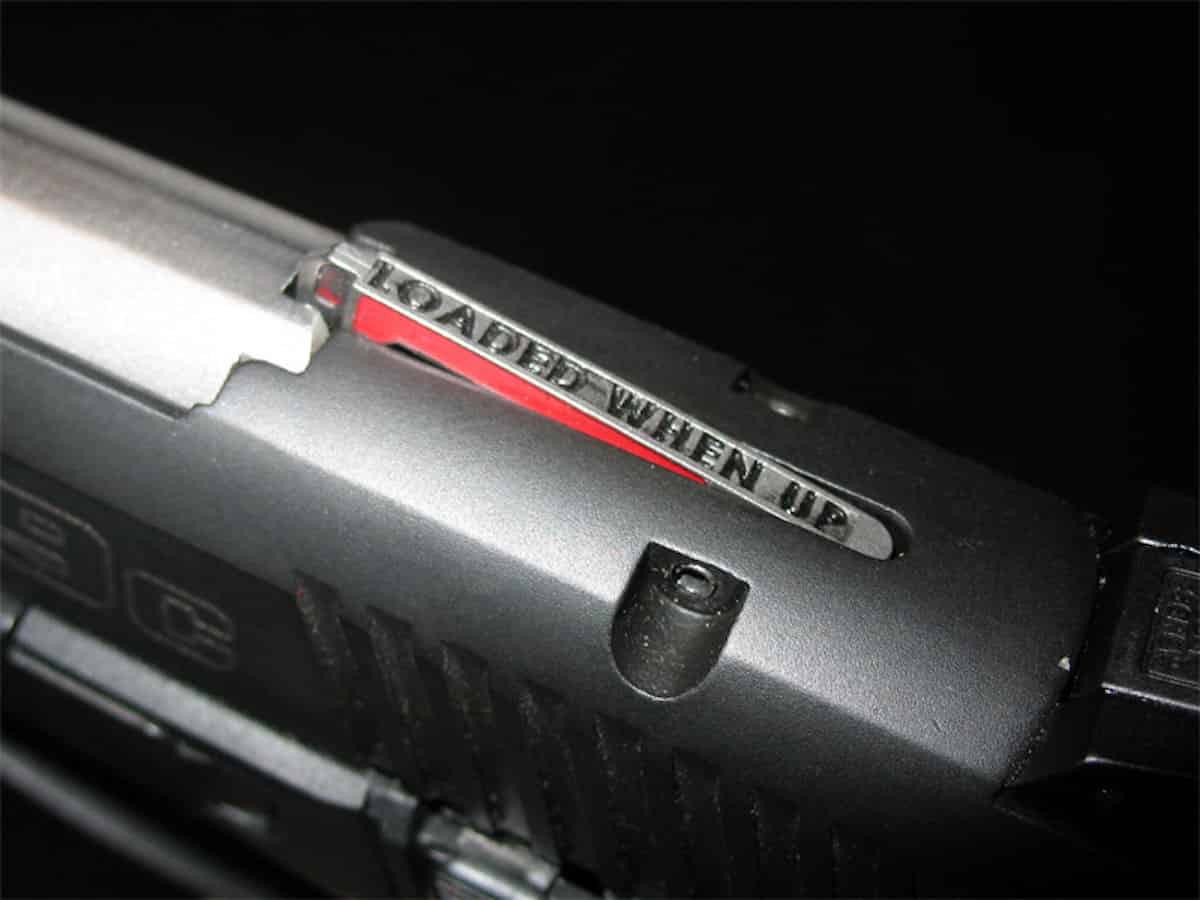 It’s the first rule in firearm safety: treat every weapon as if it is loaded.

Yet, there’s plenty of occurrences where someone assumes a gun is unloaded. The results can be disastrous.

The reason why we always check to see if a firearm is loaded is because it only takes being wrong once to ruin things for good. More importantly, it’s easy to check a handgun to see if it’s loaded. Some handguns even have indicators that act as a “heads up” that the gun is loaded. We should never take an indicator as proof positive that there isn’t a round in the chamber, though.

How To Properly Check To See If A Handgun Is Loaded

For those who may not feel confident with handguns, we’re going to discuss a sure-fire way to ensure a pistol is unloaded. A couple things you should never do:

All visual inspection steps can be done by pulling upper receiver to the rear and there is no gun that would ever require you to stare down its barrel.

Step 1: Point the weapon’s barrel in a safe direction

The best place to start this is by maintaining basic firearm safety and ensuring the barrel of the gun is never pointed at anyone or any living thing.

Step 2: Eject the magazine from the pistol.

For revolvers, you can usually slide the cylinder out and visually inspect from the back end whether rounds are loaded. Even if the shell case has its primer indented, don’t assume it’s a spent shell. Eject the shells and actually check and ensure they are just shells. Little details like having one live round and five spent in a cylinder can be a potentially disastrous detail to miss.

Step 3: Pull the upper receiver back towards you and lock it in place

While simply pulling back the upper receiver will give you a glimpse into the pistol’s chamber, it’s a good practice to lock it to the rear and visually inspect the chamber to make sure it is clear. You still keep the firearm’s barrel pointed down range or in a safe direction at all times.

Step 4: Under dark conditions, inspect digitally with your pinky or with a flashlight.

Some chambers, like that of the CZ-75D PCR, are not always easy to inspect visually under dark conditions. Use a flashlight to visually inspect or use your finger if the upper receiver is locked to the rear.

Once a pistol has been inspected by you and it is completely unloaded, it is now safe to hand off to another person for his use. He should then inspect the gun to ensure it is unloaded before either storing it or loading it himself.

Photo By Richard31585, via Wikimedia Commons

These are all good things to know. I always check ANY GUN that I pick up to look at first to make sure that it is unloaded. Even if I know for a fact that it is. I also ALWAYS lock the slide back on Semi Auto’s before I hand them to anyone or for revolvers I have the chamber swung out of the frame. This is just all part of firearm safety. And I do this with any and every firearm that I handle even if I already know that it is unloaded. And I’ve even gotten strange looks from people in gun stores when I’ve taken a gun in for trade. I always lock the slide back for semi-auto’s, swing the chamber out for revolver’s, or for lever action I open the chamber before I hand it to them. And it has surprised some people. But they do like the fact that I do it.

Linda147, what does this have to do with this article? I’ll tell you. It has nothing. And you should not be using great and informative articles like this to promote your business. And I’ve looked into these types of things over they years and they DON’T WORK. And in fact they’re nothing but a scam. And things like this should not be allowed on sites like this one.

When the slide is pulled back don’t be surprised by a round falling out of the chamber. If you see it fall free of the gun find it later. It can fall into the gun and must be cleared and in your possession or within eye sight before declaring the gun unloaded. Practice will lead to clearing the round on the first try. I’ve seen masters catch the round. But I’ve also seen masters shoot themselves. So be careful, don’t rush, and be sure the gun is unloaded.

A friend of mine – not yet a gun guy at the time – had inherited some guns a couple weeks prior from a relative who had died. It was an odd assortment, and he brought them all out to give me a look. Among them was a .45 semi-automatic – I forget which manufacturer. I picked it up, and the first thing I did was eject the magazine. Full of rounds. Then I racked slide. You guessed it – a round in the chamber. “Holy crap, Dan! Did you know this gun’s loaded?” He look like a deer in headlights. He had acquired the guns, transported them, and was passing them around, and had no idea this one was loaded. I had only just finished my CCW training, and am glad I learned those four safety rules – lest I might have one fewer friends walking this planet!

My definition of an unloaded gun is one with the firing pin on the opposite side of my body from the chamber. Even if I have personally stripped the gun for cleaning, once it is reassembled, it is to be considered loaded, despite the fact I know for a fact it is not.