ANYWHERE, USA. (AP) – A fire at a house, deemed too dangerous for firefighters to put out after live ammunition inside the house began going off, burned to the ground today.

The fire started in the chimney of the house and spread to the attic.

When firefighters arrived and started putting out the fire, ammunition began going off and shrapnel hit one firefighter.

The Fire Chief said that, for safety reasons, firefighters could only stand, watch, and let the fire burn out; it took seven hours.

If your house catches fire, would you be able to grab your firearms and all of that ammunition that might be sitting in more than one location?  For you hand loaders, can you get to your powder and primers and transport them to a safe place quickly? Although I used fire for the lead-in, I could have used a natural disaster like a hurricane, flood, or tornado.

This article is not about the legalities of transporting ammunition. Please refer to your state laws concerning the transportation of ammunition. The information that follows is for mature audiences that only need information about enhancing ammunition storage with a degree of portability.

As gun owners, we usually have ammunition of varying quantities for the guns that we have and we usually store this ammunition with three watchwords of care: cool, dry and dark. There are countless articles available to us on how to store ammunition and most have to do with two factors: Shelf life and Service Life. Shelf life refers to how long an item can remain in storage and still be functional. All military small arms have an indefinite shelf life. This means as long as it is properly stored it will never go bad. Service life refers to how long an item can remain in an operating configuration and still be functional. For the most part, before you store it make sure it clean, dry, and wiped off if you touched it and that is it! There has been much debate on what is the best way for long-term storage of ammo. I will not say it is wrong to place your ammo in a bucket, suck out all the air, and replace it with a chemical element that has the symbol N, an atomic number of 7, and an atomic mass 14.00674 u. For most of us,  we simply need to know what is the best way to properly store ammunition so that it doesn’t degrade over a period of time and that it functions as designed when put into use. We rarely think about moving it en masse, as we rotate the stock and very few articles address the portability issues of ammunition storage.

Most of us have loose boxes of ammunition. One of the most popular means for storing loose boxes of ammunition and that also addresses the portability issue is the “Ammo Can”; Genuine Military Issue, made in the USA ammo cans that come in a variety of shapes and sizes for everything from 5.56 to .50 calibers. In fact, you can purchase 81MM Mortar Ammo cans that measure 25 in. long x 13 in. wide x 7 in. high that can hold a quite a few rounds of smaller arms ammunition. Not only do the boxes seal well they are highly portable making them quite desirable for moving from one location to another. 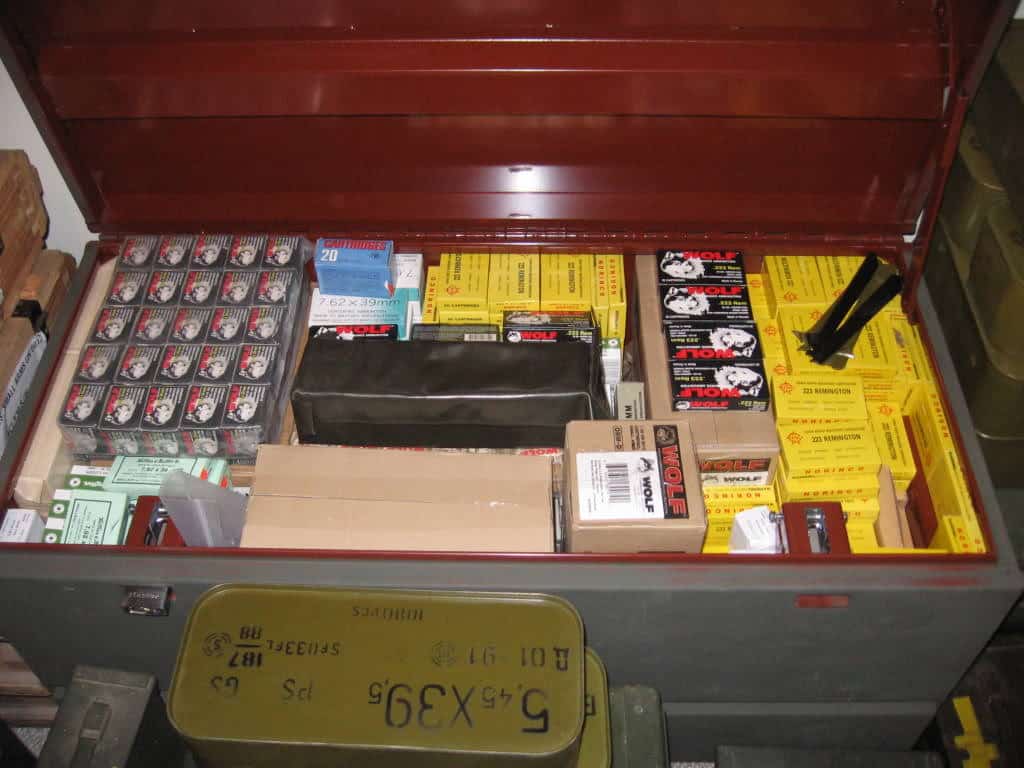 Ammunition may sit idle in the box or can that it comes in and may be stored in a dresser drawer, in the glove box of the car, high on a closet shelf along with the favorite home defense shotgun, or in a locked, large case in the basement or closet.

I know people who have case upon case of surplus ammunition for their weapons of cash destruction. The cases are stacked and the ammunition will probably never see the light of day until the fertilizer hits the ventilator (I have a couple of cases of that ammunition myself). I also know people that feel if they did not expend a couple of thousand rounds or so at a range session the world will, in fact, end. They are usually found with massive amounts of surplus ammunition that would label them as a terrorist in some circles. 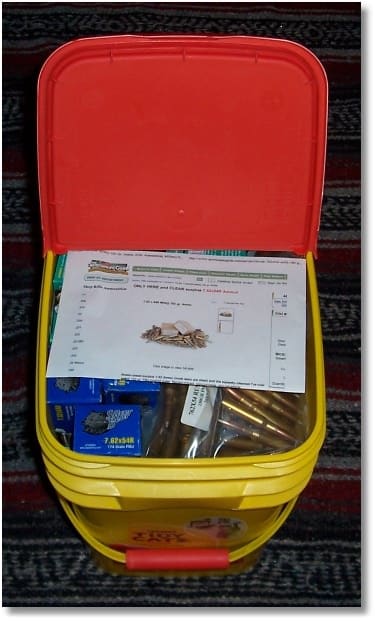 Weight wise, bulk ammunition storage will always present a problem. If you simply have a drawer-full of ammunition for your favorite handgun, rifle, and/or shotgun, just grabbing it and going may not be an issue. If, however, you have managed to accumulate quite a bit of ammunition either by reloading your own or by OTC (Over-The-Counter) purchases, the bulk and weight of the ammunition may pose a problem when you have to grab it and go.

Regardless if the intention of storing the ammunition is for short-term or long-term purposes, one must answer the question of the portability of that ammunition, as there may come a day when we need to not only get to it but also get it out of the house as quickly as possible. Accessibility and portability are two different entities. If it would take a forklift to move your collection of ammunition, it is not easily portable.

I looked at my own past way of storing ammunition and the one thing that was missing was portability. Most of my ammunition was like Waffle House hash brown potatoes; scattered, covered, and smothered in and under various locations in the house. Small boxes of ammunition were here and there and everywhere. I wanted my ammunition localized but with one requisite, I needed to be able to snatch-and-grab it at a moment’s notice.

One answer to my problem of ammunition portability lies in recycling a container that once held another product – Cat Litter. Since I have cats, putting the litter to use was no problem. What I had left afterward were the pails stacking up in my carport.

Tidy Cats cat litter, for example, comes in 25-pound, 27-pound, and 35-pound pails among others. Each empty pail can hold quite a bit of ammunition whether for a single caliber or multiple calibers. The lids snap shut and a handle provides a means to carry the pail.

In the example shown of one of my 35-pound Tidy Cats pails, slightly over 1500 rounds of my favorite 7.62 x 54R ammunition for my Mosin Nagant lays patiently awaiting use. All I need to do is grab the handle and go with it. Another 1760 rounds, still packaged in the original shipping containers and boxes, are grab-n-go as well. There is also about 200-rounds, scheduled for shooting over several range days, packed in a dedicated “Mosin” range bag. I keep them all in one location.

One advantage of the Tidy Cats cat litter pails is that the containers can be stacked, which gives me the New York answer to my ammunition storage space challenge– if you cannot build out – build up.

As a side note, would you like to read about a covert use of these Tidy Cats cat litter pails? I thought that you might. If someone breaks into your home, the burglars will be looking for weapons and ammunition among other things of value. You may have a safe that houses your favorite firearms and might even have an abundance of ammunition locked up in a secure and fireproof container. If you use the Tidy Cats cat litter pails for ammunition storage, all the BG will see is one or more pails of cat litter stacked in the corner and how many BGs do you know that want to go rummaging through or steal cat litter? Not any, I would venture.

Another idea for ammunition storage and portability lies in the use of portable, wheeled, tool bins such as the Contico Tuff Bin With Wheels or the Stanley Consumer Storage 037025H 50 Gallon Mobile Chest. These bins are of tough structural foam construction impervious to most chemicals, gas, and oil. They have professional grade wheels for rugged mobility and pivoting handle for easy handling and they can hold a lot of ammo and other items that you might have to evacuate quickly. I use one of these bins as my “survival box” that contains quite a few items needed for survival and that can be easily loaded in my vehicle and broken down later as needed.

There are also smaller versions of this type of box, such as the 92-Quart Camp Footlocker (Single) by Sterilite.

Another great means of making stored ammunition portable is with “Ammo Bags”, which are military surplus (or commercially available tote bags) bags intended for the transportation of ammunition, among other things.

One of my favorite bags, called the “Tactical Hipster“, serves not only to carry ammunition but can also carry a handgun that is chambered for the ammunition and other items such as spare magazines, cell phone, food, flashlight, etc. One such bag is set up for .22 long rifle carry. A pistol resides in the inner zipped pocket while the main pouch contains 4-boxes of Remington 36-grain PHP ammunition – That is over two-thousand rounds of ammunition with room to spare for more! I also have several others set up for different calibers.

There are an abundance of military-type bags and the bags, once loaded with ammunition and stores, can be placed inside a safe or storage locker such as the previously mentioned storage bins, or simply thrown over the shoulder for a fast exit.

Another great thing to have on hand and that can be part of your ammo storage portability answer is the furniture dolly.

You can purchase furniture dollies for reasonable prices or cheaply construct one to your own specifications. I have three that I made for my Tidy Cats cat litter ammo pails and I can move some heavy ammo from one point to another without any effort. If you have an ammo storage locker, simply place the case on the dolly, load it up with your favorite ammunition, and wheel it away when necessary. Aside from my ammo moving necessities, a file cabinet sits atop one of these. If I need to move the file cabinet, I simply push it to where I need it. The casters are large enough to roll atop grass easily.

Your house smoke alarm just went off and you have precious seconds in which to accomplish your objectives. Get the family, the cat, two dogs, your son’s pet Iguana, and your daughter’s pet hamsters out of the house. Get your new Porsche, the Harley-Davidson, the boat, and your wife’s 10-year old Plymouth Voyager out of the garage. Grab the fire extinguisher and head down to the basement. Unlock the gun safe, grab all of the pistols, revolvers, rifles, and shotguns and get them out the back door. Hearing Fire Engine sirens in the background, you start grabbing boxes and cans of ammunition and you start thinking, “What the hell was I thinking?” I hope that part of your thinking was how you were going to move it while accumulating all of that ammunition. The portability issue, with that part of your storage plan being somewhat important at this particular moment with the house burning down around your head, might be an important issue to think about in the near future.

The above are just some suggestions to get you thinking about how you are going to move ammunition should the need arise. There are advantages and disadvantages to all of the aforementioned means of storing and moving ammunition and those will be particular to your ammo storage situation. Storing ammunition is easy. Storing ammunition with the ability to move it quickly takes a little more effort.