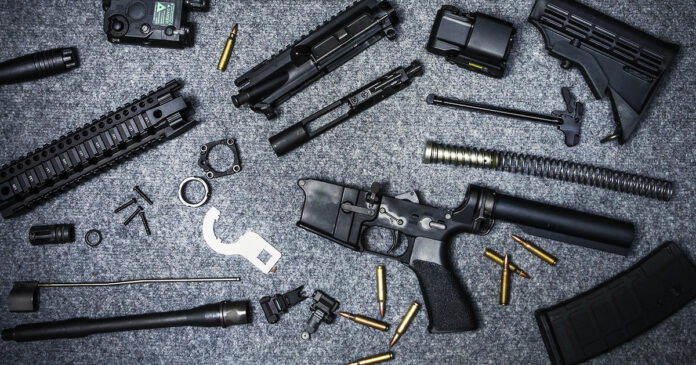 If you’re piecing together the various bits you need for an AR build, it’s worth it to ponder whether you should get a complete lower or piece together the parts you want (or can get, anyway) instead.

During more normal times, when parts are actually available, you can actually order specific makes/models of the parts you want, like triggers, specific buffer components, stocks, grips, etc.

Right now…things are a little different.

Which is better? Here are some pros and cons.

A Complete Lower Can Save Money And Time

The selling point of a complete lower is that it saves money and time in most instances.

As to savings, you can put together a lower receiver using cheaper components for less money than a complete lower. A lot of different companies make GI-spec parts; you can spend less and get roughly the same GI trigger, buffer and spring, CAR stock, small parts, and so on.

A lot of mil-spec lowers are usually pretty affordable, but everyone has to work out what their budget constraints are.

However, you’ll generally save less money putting together a Gucci lower. Once you start adding the selector, an upgraded trigger, and so on, a lot of companies tend to offer a complete lower with all the bits you want or at least some of them for less than buying them separately.

Cue someone disagreeing in the comments, but you didn’t include tax and shipping charges, did you?

In other words, you’ll save a lot more on lower-end lowers and parts, but you can still save some cash with one that’s far more kitted out.

As to time savings…well, it speaks for itself. The lower ships to a gun store, you fill out your 4473 and pay the transfer fee…which you’ll also pay for a stripped lower anyway, but nevermind.

Anyhow, a definite savings of time and a possible savings of money, though how much depends on a lot of factors.

Also, think about this: you can buy what you might call a working-class lower that works, then upgrade as you go. That way, you spread your costs out over time and you get a working rifle to start with.

If building a receiver piecemeal, the two primary selling points are a possible savings in terms of money as well as total control over the parts that go into it.

You get to pick every single component that goes into the lower.

Add whatever stock you want. A standard CAR stock, BCM Gunfighter, Maxim CQB, whatever that might be.

You can choose the buffer system components. Get an H1 buffer to smooth recoil in a carbine gas system, or add the Silent Capture Spring system to deaden spring noise.

Get the perfect trigger for your intended purpose. Two-stage, single-stage, Geissele, Timney, KE, whatever you want.

For the connoisseur who knows exactly what they want, this is the option for you.

As to savings, well, you run into the situation described above. You can realize a savings by piecing together your own in some instances, but it is an economy of scale; you only really save money if all the stars align.

So, on the low side…you might be able to save some cash. However, once you graduate beyond a poverty pony build, the selling point is control.

IF, that is, you can actually get parts. All the good stuff is and has been sold out for some time.

But Be Aware: Your Lower Receiver, And Your AR Build, Is Only As Good As The Builder

However, the thing with any AR build is that the end product is only as good as the person who puts it together, including the lower receiver.

Assembling the lower receiver of an AR-platform rifle is hardly the most daunting project, but there is a LOT that you can get wrong. The most common failure points in a lower build are the recoil buffer assembly – especially the castle nut staking – and installation of the controls such as the bolt release, magazine catch/release, and the trigger/hammer assembly.

Installing the forward retainer pin is an often three-handed job as well!

A lot of the people who have issues with AR-15 rifles out in the real world often enough are using a shoddy home build, sometimes their own, and sometimes a buddy who “knows what he’s doing.”

That’s an additional risk. If you don’t know what you’re doing or haven’t done it before, the potential risk of completely screwing up the build is something to be borne in mind.