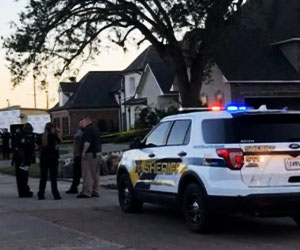 I saw this story come across my feed yesterday since I am somewhat local to the area. There weren’t any details at the time, only that a man was and airlifted to a local hospital.

Well, we have a bit more detail about this incident today. A 51-year-old man, Michael Woulfe, driving a black Ford truck, reportedly hit a silver Mercedes driven by a 78-year-old man, Walter Tabary, who had his wife in the passenger seat.

After the crash, Woulfe drove off instead of stopping. That’s when Tabary decided to call the police and follow the man, unsure of where he was going. Woulfe wound up driving to his home, where the two got into an argument.

According to a neighbor, Tabary said he had a gun and threatened to shoot Woulfe. And that’s what he did. Tabary fired one shot hitting Woulfe in the stomach. Woulfe laid on the ground for a few minutes and then got up and started beating on Tabary’s car window.

Car windows are hard to break, so Woulfe decided to go into his garage, get a wrench and then smash the car window. That’s when Tabary shot Woulfe two more times.

Woulfe was airlifted to a hospital and is in guarded but stable condition. Tabary was reported to have sustained facial injuries. The police have multiple sources of video footage as well as witnesses. We will have to wait and see what the outcome of this story is.

But, in my opinion, Tabary could have avoided all of this.

Would I be pissed off if someone hit my car and didn’t stop? Most likely, yes. But as I’ve said before, it is just a car, and I have insurance. I would take down the license plate number and then call the police. Nothing good will come out of chasing the man down and confronting him. If someone hit your car and didn’t stop, I’m pretty sure they won’t change their tune after you’ve chased them down. They probably didn’t stop for a reason.

Whether or not Tabary will be looked at as the aggressor in this situation will depend on the evidence and witness statements, but it seems like he might have been with the details we have. Initially.

Now is shooting someone that is breaking your car window considered self-defense? Could be. Are you in a state with no stand your ground law? Then maybe not?

These are things we need to take into consideration when deciding to carry a gun for self-defense. And we’ve talked about this before, but you need to check your ego at the door. In this incident, the man who has his car hit is most likely regretting he ever decided to follow the other man home. Whether or not he is charged with anything.

Dang. The crazy was strong. Get shot, get weapon, return with weapon, attack again, get shot twice more?
I get being ticked about hit & Run drivers. Get solid license numbers, you wife is in car? Have her video the car a bit. While she uses your phone to call 911. Find a place for lunch, or go home if near. Call insurance, body shop… (pull off check if drivable safely first). You endangered your wife.
At very least realize. “I can drive away from crazy person on foot, pounding on my windows”. In this version the first shot sounds “questionable” but video of him driving away from Wolfe? How about him backing away, then trying to drive ahead but Wolfe keeps jumping in front of car? Imo much better then video of your shooting him. At minimum (if you are thinking) once guy goes for weapon. Drive around corner. Wife is on phone with Police. You have given info. You are not “fleeing” you are removing yourself, wife to safety. What if he came out with a rifle?
I had a hit & run. With family in car. Police could do nothing as he had a junkyard license plate. The next day I followed him home. (People are creatures of habit. Within 5 minutes of him hitting me day before he went thru the same intersection). I followed him home, got the cash to pay for deductible. No license, no insurance….(still not smart action on my part)