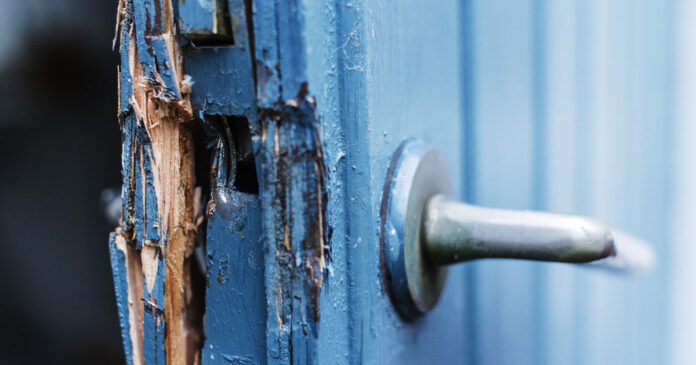 A 34-year-old man went looking for his ex-girlfriend about 11:30 PM on a Monday. When he got to the Philadelphia home, he kicked the door so hard that police said the door was literally kicked off of its hinges.

Once he entered the home, he was met by a male occupant who was armed. According to investigators, he fired at least four shots, hitting the ex in the chest and a leg. He was pronounced dead at the scene. A handgun was recovered at the scene, presumably other than the one used to defend the home.

The shooter and several witnesses are cooperating with investigators. There is also a private security video that may help with the investigation.

How secure is your front door?

Many people install good deadbolts, but how strong are your door’s hinges? Even so, this must have been a pretty powerful man to be able to do something like that. If it turns out that he was armed, then it would seem likely that the male occupant was justified using deadly force, but even if not, someone able to bring that level of violence to bear could very well be considered a deadly threat unarmed.

There was no mention if the ex-girlfriend was actually in the home when the attack occurred. If she had been home alone and unarmed, this could have been a completely different story.