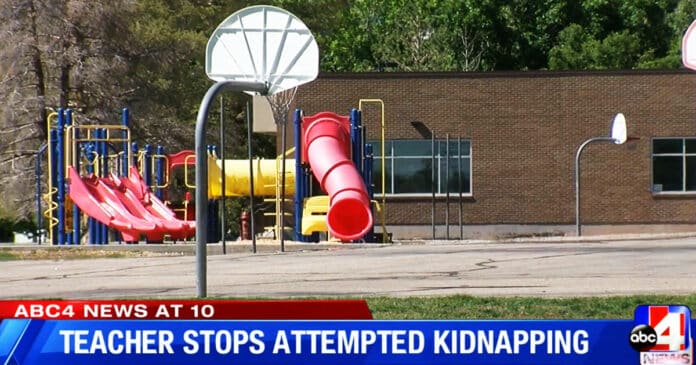 Ogden Police say about 20 children were present on the Lincoln Elementary playground when 41-year-old Ira Cox-Berry walked on the grounds and grabbed one of the children.

A school employee noticed as he was watching the kids, running out of the classroom and confronting Cox-Berry telling him to leave. The girl, 11, was able to get away when Cox-Berry was confronted. The rest of the students were rushed back inside the school as a lockout ensued.

The kidnapper still tried breaking into the classroom through a window, yelling “Emily” according to police, which is not the 11-year-old girl’s name.

“At that particular time, the school employee drew a handgun and pointed it at Cox-Berry and he attempted to flee,” said Lt. Brian Enyon with the Ogden Police Department.

The employee is a concealed carry permit holder, who called 911 while holding the suspect until police arrived.

“This employee is protected under the Second Amendment. He followed all policy and procedure at the school, and in this particular case, did everything that he should have done to protect the innocent lives of the children at the school,” said Enyon. “And in this case, it is likely that a life was saved or injury to a life was prevented due to the actions of this heroic employee.”

Jer Bates, the spokesman for the Ogden School District, also praised the employee for his actions, saying every student and fellow employees were all accounted for. “We’re grateful that an adult was at the scene and had the presence of mind to intervene and take steps to ensure both student safety and the safety of fellow employees,” said Bates.

Officers also added that Cox-Berry was high off some type of narcotic as it was a struggle taking him into custody. He was held at the Weber County Jail on suspicion of attempted child kidnapping, with more charges pending.

First off it is great the girl and all the other children were saved. This teacher should receive all the more praise for taking matters into his own hands. With him being a concealed carry permit holder, this gives an expanded outlook for allowing firearms on school grounds. Many, if not, almost all school grounds are rather gun-free zones, making them easy targets for harm. This is not to say that teachers should be going openly carrying firearms and what not, but it definitely begs the question what further damage and harm could have been done by the suspect had he not been faced with a deadly force.

As stated by the Lieutenant, the school employee is protected under the Second Amendment while also following the policy and procedures at the school. Going back to him being a concealed carry permit holder, he more than likely is well-trained and/or knowledgeable of situational awareness at the very least. The last thing he would probably want to do is fire his weapon in front of the children, let alone draw it, but their safety was at stake and the necessary defense was made to protect the livelihood of these children and the rest of the school.