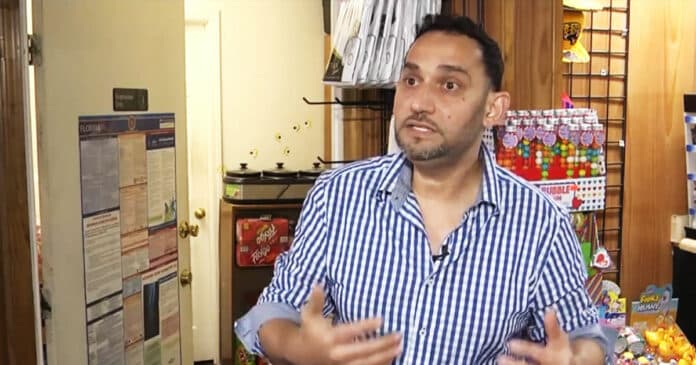 Hassan Alissa, the owner of Blue Angel Groceries in Escambia County, Florida had more than a dozen shots fired at him by deputies in his store due to false information.

Deputies had been investigating an officer-involved scene that day which occurred behind the Blue Angel Groceries. A witness to the scene gave a false identity to investigators, which was Hassan Moorer, who had several outstanding warrants. When deputies learned, they went back to the business where the shots at Alissa would soon occur.

Alissa was in the back of the store sleeping when he awoke to what he thought was a commotion involving the safety of his employees. He says he poked his head out the door and was met with gunfire. He had a gun but threw it on his bed after deputies were shouting his name, stating where the gun was and that he was unarmed.

“I’m the victim,” Hassan said. “I didn’t do anything wrong.”

Per the Escambia County Sheriff’s Office, Hassan had a weapon as he poked out the door: When deputies entered the building and announced their presence, they were met with an individual, who was not Hassan Moorer, pointing a firearm in their direction.

Due to the different stories, you have to give both sides a clear view. We, besides the sheriff’s office, know this Hassan of the grocery store was not the actual suspect. The blurred view of this is whether or not Alissa actually had a firearm at least poking out in the deputies’ view, seeing as though he himself stated he poked only his head out the door. In regards to Hassan Moorer’s warrants, multiple of them involved the use of a deadly weapon, which can be understood in a sense why the deputies were on high alert firing more than a dozen shots.

It is really complicated to see who is at fault here, but could Alissa have looked at his surveillance before looking out the door, possibly with his firearm? It was actually also found his cameras were ripped from the ceiling, but not stated before or after the shooting. And for the deputies, did they not have an accurate description of the actual suspect Hassan when they went back to the store? As much as we know Alissa was not the real suspect, there are two sides of clashing information, both taking measures to defend themselves. As for Hassan Moorer, he was found and arrested later that same night.