I don’t know if you have ever attended the NRA National Convention, but I had not. I had been told that it was well worth attending as it was the closest thing civilians get to being able to attend the “Shot Show” which is held in February each year. People told me that like the Military’s “Shot Show” all the new things would be there, even prototypes and many of the companies just shipped their booths and display items on to the NRA National. So, I went to the NRA National Convention in St. Louis last month – April 12th and 13th! It was an experience well worth the effort.

The next NRA National Meeting and Exhibition will be held in Houston on May 3-5, 2013 at the George R. Brown Convention Center. Then it will come back to the Midwest to Indianapolis April 25-27 for 2014. I would recommend that everyone who is involved with firearms of any type, even non-shooting collectors, try to make at least one NRA National. I will definitely attend again when it is brought to my front door in Indiana.

But, you might ask what I learned in St. Louis. Would I do the Conference and Exhibition floor the same way? The simple answer is both yes and no. Here are some examples –

The advertising is for the Convention portion and says the opening date is on a Friday. In fact, the Exhibition Floor opens on Wednesday, typically at about Noon, and continues Thursday, Friday and Saturday all day and then again on Sunday morning. This schedule allows those who wish to attend the meetings to get on the Exhibition floor before the Conference portion begins. What I learned – If you possibly can, do plan to be there on Wednesday; try to AVOID Saturday and Sunday at all costs as the crowd triples and you can hardly move or get close to the most interesting displays. 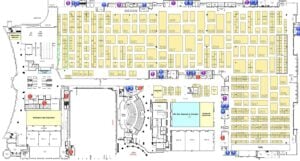 In St. Louis there were 350,000 sq. ft. of exhibits. If there is any logic to the floor layout it mainly just groups smaller 10X10 booths together at the ends of the “main” exhibit spaces where the booths may be 30X50 or even larger. But in each area there is no relationship to what is next to what. Shooting clothing might be next to ear protection after which is a knife display. The big names like Winchester, Remington, Sig Sauer, F&N and Crimson Trace have huge signs so you can see them from several aisles away. What I learned – Use the first day or half day to scope out the whole Exhibit area pick up the catalogues you really want and the giveaway logoed things, all the time marking out where you want to spend longer than a couple of minutes. There are bags (the first days), but the things and catalogues go fast and get very heavy, so it is better to put it all back in your car before you stand for 20 to 30 minutes talking to manufacturer’s representatives. By the way, there is almost no place to sit in the Exhibit area!

There are things that you can buy from clothing, to sights, to holsters, to laser sights and dry fire laser tools. NO GUNS to walk out with, but Tasers and knives yes! What I learned – Yes, there are some good deals! At least from the perspective that one good deal is being able to see and hold items you will never find at the local gun dealership. You can order guns from some, and at good prices; they will be shipped to your FFL later after the show. So have your FFL’s information with you. Note that very few of the booths take credit cards and it is almost all a cash show for the best deals, so bring plenty of folding green as you won’t get far on plastic.

Finally, What I learned – The best part of the show is that everything related to guns and everything each manufacture makes is out on display – just without firing pins that would strike a primer. You can pick up every model of a firearm each company makes and dry fire them to feel it in your hand. Then you can go several booths over and try the other company’s model the same way. Try that at any local gun store. Better yet you can see if Crimson Trace or Leopold makes a sight that fits the new models you like. That is why you want the second day to do the detailed exploration without bags if stuff in your hands!

What’s In Your Holster?

Have Gun Will Travel – Packing

Van Phillips uses his long university teaching teaching experience as an NRA Pistol Instructor offering numerous yearly classes in Central Indiana for adults. He is also a 4H Pistol and Shotgun Instructor, CMP and SCTP Coach. Van is a competitive clay target shooter active in both ATA Trap and Sporting Clays. While he teaches pistol to adults so that through knowledge they can be better and safer firearms owners, his passion is empowering the youth who represent the future for continuation of 2nd Amendment and Concealed Carry rites!

Have Gun Will Travel - Packing