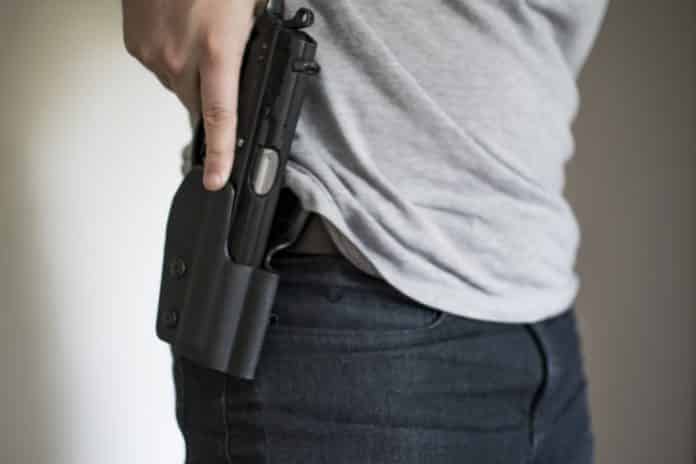 It doesn’t matter what weapon you carry on you – your opponent never needs to know about it. Brandishing a weapon is like giving away the best trump card you have. The true weapon is you. The weapon you use in your hands is simply an instrument to bring about that damage. Revealing your weapon to your enemy is like saying, “I can’t think for myself, and I let this weapon do all the thinking for me.”

That’s fine if your opponent is easily intimidated. If he isn’t, you just set yourself up for failure.

Let’s take any weapon – a knife, baton, pepper spray, or even a gun. The second your opponent knows your capabilities, he also can learn your limitations.

The only time a weapon should come out is when you absolutely intend to deploy it for the best effect.

Even pepper spray, which requires distance, doesn’t need to be shown until it’s used. In fact, the closer your opponent gets, the more effective it becomes.

We’re covering this topic because, in recent weeks, there have been some news stories surrounding people brandishing weapons when it wasn’t necessary – and opening themselves up to all sorts of trouble in the process.

This example illustrates our point precisely. A man in West Virginia pulled his gun out in church to pose with pictures. Understandably, some congregates didn’t approve and in fact, were panicked by the act.

When someone pulls out a weapon without provocation, people panic. They don’t know if their life is in danger or if it’s just some sort of antic.

This is doubly true when interacting with law enforcement. If a police officer wants to see your handgun, he or she will tell you. Otherwise, they will likely interpret it as a threat.

Weapons are interpreted as serious business. Knives, batons, guns, pepper spray – they all serve a purpose in an individual’s self-defense arsenal. But we have to be careful about how our actions are interpreted by others when our lives are not directly at risk.

If your life isn’t directly at risk, your personal defense weapons can stay put.

Self-defense weapons should have two key features to them:

While swords are impressive looking, people don’t generally view swords as societally normal to carry around. Is this a bad thing? Arguably. But there’s literally no reason ever to “get medieval” in a normal day-to-day encounter, and the presence of a sword will generally make people a bit more leery of your intentions.

That said, short swords can come in particularly handy around the house. Don’t discount them – just know when they apply.

The three main features everybody interested in self-defense should cultivate are:

These three things will help you determine when it is appropriate to bring out a weapon. Hopefully, that time (outside of practice) is never.

This article makes a great point about never deploying a self-defense weapon until you are about to use it.

BUT this runs up against the much publicized and well established fact that the majority of “Defensive Gun Use” incidents occur without any shot being fired.