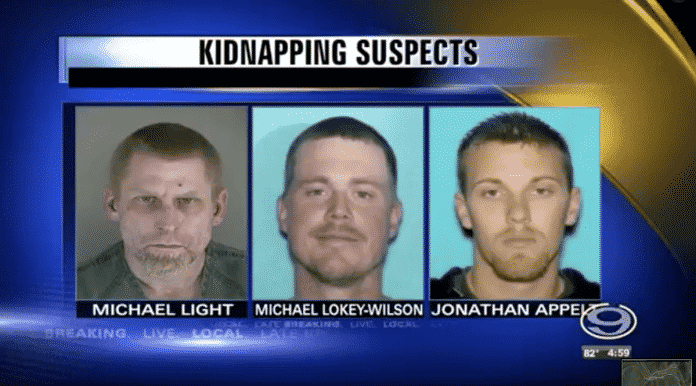 A woman on her way to go bear hunting early one morning spotted a badly beaten man on a highway near Walton, Oregon. Stopping to check on him, she learned that he and his girlfriend had been kidnapped and the kidnapper had his car, which was nearby.

After the hunter called 911, the victim told her, “He is going to kill me, and he’s probably going to kill you since you are here.” The woman told the man to find a place to hide, and she readied her hunting rifle when she saw an armed man coming down the highway on foot.

The armed man fled before officers arrived, but a search of the area turned up the victim’s girlfriend and another attacker in a vehicle nearby. The other attacker was, you guessed it, the ex of the girlfriend. The victim and his girlfriend were camping when three men entered their site and assaulted the male victim for an extended period.

Two of the men are at large and considered armed and dangerous. The girlfriend’s ex faces second-degree assault and first-degree kidnapping charges.

It’s not clear how the woman’s hunting rifle came into play, meaning whether or not the armed man on the road was run off by its presence.

This, of course, was a targeted attack by an ex-boyfriend. Usually, though, they don’t bring a couple of buddies to help beat up the new guy in their ex’s life, which shows clear premeditation. It wasn’t revealed how he ended up on the side of the road, but I’m certain he was glad to see an armed Good Samaritan that could call 911 and protect him if necessary.

Perhaps two lessons for all of us here. Don’t be too quick to get involved with someone who has an ex (probably abusive) that won’t take no for an answer, and just because you might be deep in the woods away from civilization, that does not mean you are safe from attack.

Many remote locations are great for getting away into a peaceful calm environment, but it’s best to be prepared not just for four-legged predators but also for the two-legged kind as well.

It is good to also be aware that abusive partners are often into control. With that control there is the opportunity to place tracking apps on phones. So thinking you may be on some secluded trip may end up with surprising ending. Always think and keep you situational awareness in check.