The Best SHTF Gun Debate Is…No Debate At All 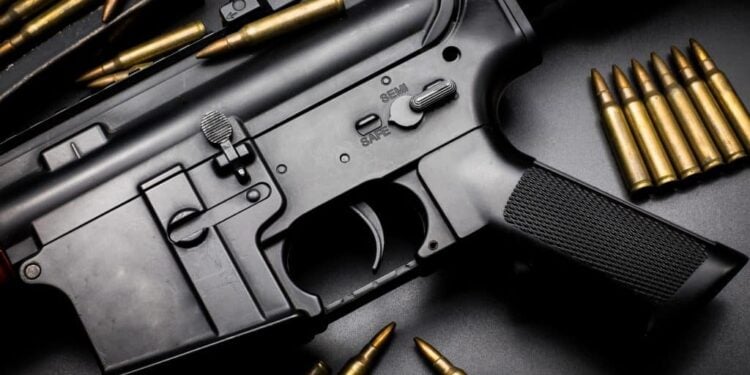 The first time I shot my M&P15 Sport 2, AR 15, I realized exactly what I had. I was in possession of an economical, incredibly powerful and accurate, brand-backed, SHTF gun. And the good news is, that’s exactly why I bought this beast of a weapon. We can discuss specs all day, but that would defeat the point of this article. Because in the end, my purchase of the M&P15 Sport 2 AR 15 was one of economics and usefulness. Those factors might not fill your perceived prepper voids.

So let’s hit some backstory.

I’m a prepper. I’m not sure I’d call myself an elite prepper by any means, I don’t have an expensive homestead, filled with massive food and water storage units, and flanked by a military grade safe house. But I do prepare for the worst. And I do run a prepper news site. I have water filters, fires starters, multiple survival knives and a bug out bag. I have a guide written for how to survive an EMP attack. And yes, it includes having a reliable SHTF gun.

Your Glock Won’t Cut It When SHTF Goes Down

This is one of the biggest questions I get when discussing a SHTF gun: Will my Glock 43 be sufficient? My answer is always, “not really.” In the end, any gun is better than no gun if massive looting and civil unrest become a new reality. I’d rather have 7 close range rounds than no rounds whatsoever. I’d rather be able to take down a threat at 20 feet than not be able to take one down at 2 feet. The logic I’m pontificating here is some sound stuff, I don’t think anyone is going to argue that.

But reality is reality. I love my Glock 43. And you probably love your Glock, or Sig Sauer P250, or M&P Shield. These are great guns. They carry potent 9mm rounds. They are as reliable as any gun on the market, including, yes, revolvers. They are accurate in the short range. And most of all, you can conceal them on your body, or store them in a bug out bag without taking up too much extra room.

But the inherent problem with SHTF is that it is not the same as an attacker in your apartment parking lot. Civil unrest is chaos. Civil unrest can also become organized militias and the gateway into dystopian conditions.

I love my Glock 43, but if true SHTF conditions occur, my timeline is short if that’s my only firearm. Here’s a couple of short points as to why that is:

Combine both of those factors and you fall pretty low on the food chain in a civil unrest environment. If someone breaks into your home, the sub-compact handgun certainly has its benefits. If you are walking alone and a knife wielding attacker attempts to harm you, that sub-compact might well be your best friend.

But that’s not civil unrest. Civil unrest could offer multiple attackers acting from points well beyond a sub-compact’s 25 yard max. Now, let’s keep it real for a second. If you have an armed attacker at 25 yards, that’s moving, that’s potentially exchanging rounds with you, you will have 7 rounds to win this battle. Good luck, because being accurate at 25 yards is already tough with pinned paper targets, much less when that target is in motion and exchanging gun fire. Sure, you can swap magazines, but that’s time-consuming and you might not have a ton of time.

The key to surviving such a situation requires longer range accuracy and increased magazine capacity.

The AR 15 Is The Best SHTF Gun There Is

I’ve seen all the debates. And yes, all styles of guns have their pros and cons. But when it comes to a specific SHTF scenario, the AR 15 is not only capable of saving your life but also dramatically increase your survival timeline depending on how prepped you are in every way.

The SHTF gun debate is one that gets confused. Handguns, shotguns, and even traditional rifles are all great, but those are truly secondary SHTF guns. Should you have a sub-compact handgun in your bug out bag? Absolutely. Should you sometimes conceal that sub-compact handgun on your body? Of course. The one big flaw with a rifle such as the AR 15 is that your preparedness is out in the open. Additionally, if you stop for water or need to build a homestead, you are probably going to need to lay down your AR 15. Having a subcompact on you is great for the survival business.

Shotguns are the end all when it comes to self-defense and even hunting. They can forgive blemishes in accuracy. But they are heavy, utilize limited ammunition capacity and can destroy the edibility of small prey. They also offer way too much collateral damage potential.

SHTF is underway. You have some food storage, at least I hope you do. But things happen. And you will need to survive. Wouldn’t it make sense that your gun could also take down a deer if need be? You will need to eat. And an AR 15 offers you an improved chance at bagging a deer over a Glock.

The .223 round is NOT a perfect round to kill a deer with. Nor is it a great round to unload on an angry bear that wants to know why you accidentally walked up on its cubs.

We are talking about versatility here, not perfection.

No one wants to envision a world that’s so dystopian that we have to hunt deer in order to survive. But to be a prepper, you have to consider a worst-case scenario. North Korea consistently threatens us with an EMP attack. And guess what, they are more than capable of pulling such an attack off. In fact, that would be their logical tactic, all things considered. If the power grid is compromised, get ready, SHTF will be underway in no less than 1 hour. Once the villains figure out that power is gone, they’ll cease the opportunity to move up on the food chain.

I don’t want to spend too much time in this section because if you are so naïve as to believe this is conspiracy talk, you probably shouldn’t be reading this article at all. Recently, St. Martin was subject to a direct hit by superstorm, category 5, Hurricane Irma. And following that, a civil war broke out.

Ask yourself, would you want to rise up from the debris that was once your home and see these circumstances holding only a Glock 43? I think the answer here is obvious.

So of course, I’m saying Smith and Wesson’s entry-level AR 15 is the greatest gun ever manufactured, right? Come on, folks. If you have the money to blow, you can do a lot better than the M&P Sport 2 AR 15. There is no question about it. But remember, we are talking about a SHTF gun. And in such a case, we are likely talking about being economical.

The M&P Sport 2 will run you $700 ON THE HIGH END. It will come with little need for aftermarket parts. It has iron sights, which might be preferable in SHTF conditions. They are deadly accurate.

When you budget for your SHTF gun, you can’t just budget for the cost of the gun. You need to prep and buy monthly ammunition. Rather than purchase a $1500 AR 15, you could get the M&P Sport 2 and tack on $700 in ammunition. That’d be way more effective. That would mean you’d have a deadly accurate AR 15 and near 1,400 rounds. That’s pretty effective prepping.

You can purchase aftermarket parts as you wish. If you want a scope, you can get one after the fact. If you want red dot sights, go for it (but consider buying an emp protective cloth to protect them, like this one on Amazon). The only thing I think is essential to replace is the handguard on the barrel. It is rather terrible. If you fire a full magazine, you will feel a lot of heat and it will stay hot for longer than you’d think. This is due to a lack of metal inside the plastic guard. I think you can get a better Magpul one for $25ish which will also allow you to easily attach accessories that you may add down the road.

The rest of the gun is ready right out of the box. Once you have it, you are just buying ammo and cheap magazines.

This makes is a convenient, economic, AR 15 purchase. But hey, if you have the money to spend on something more robust, I’d say do it. No matter, an AR 15 really needs to be in your prepper, SHTF arsenal. There is no doubt this firearm can sustain your life for years to come, pending you were wise enough to stock up on ammo.

Cory Wayne is the founder of <a href="https://prepforthat.com" target="_blank" PrepForThat.com, a modern prepper and libertarian news website. Wayne's focus is on fair and balanced reporting as well as spreading awareness regarding the modern prepper movement.