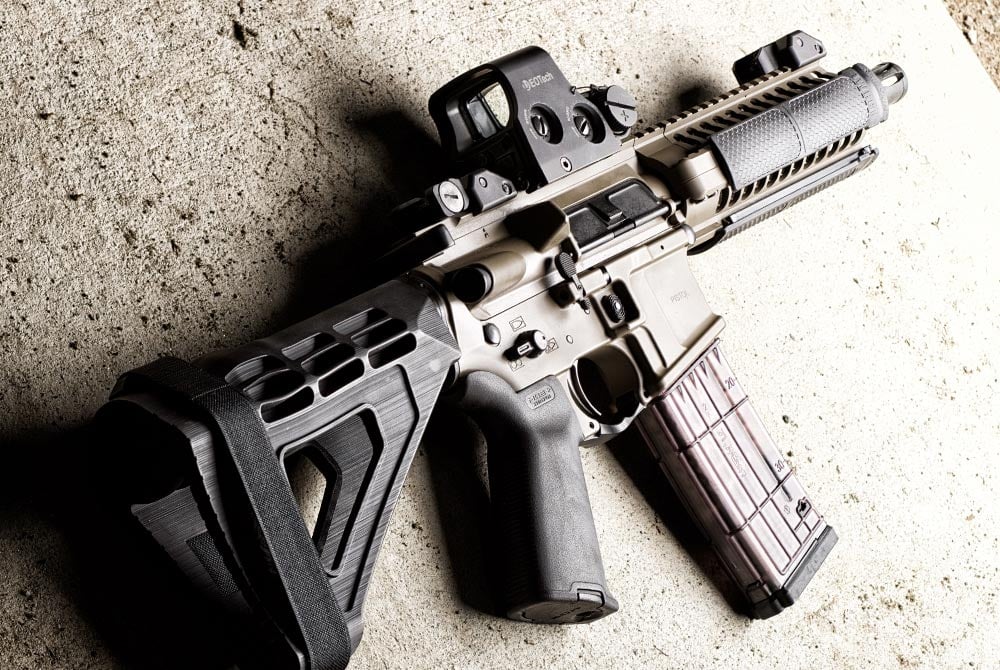 AR pistols aren’t just a passing fad. With the ability to chamber a multitude of different calibers, AR pistols are portable, lightweight, and versatile in all the ways a gun owner needs in a life-or-death emergency.

In this article, we’ll discuss ten ways an AR pistol is an essential piece in any gun owner’s defensive tool kit.

Plenty of hunters and gun enthusiasts keep a shotgun or rifle as their proverbial trunk gun. The AR pistol platform is a perfect addition to that team. With modern optics, an AR pistol can reach out and touch medium range targets with ease while still being able to maneuver in tight spaces.

#2. Reach Out And Touch Someone

Because it’s an AR platform, it’s likely able to have a wide range of optics mounted. From holographic red dot to more long range options, it’s you AR pistol,  and you get to decide how you want to engage.

Because the AR platform is customizable, it’s very easy to build an AR pistol to suit your caliber needs. Want a .300 Blackout MCX Rattler? It’s yours. How about an AR pistol chambered in 9mm? Also done. Your imagination and ammunition requirements are the only limits you’ll face when constructing an AR pistol.

#4. Choose Your Own Adventure

From barrel length, optics, trigger, brace and handguard, there’s not a single thing you can’t customize with your AR pistol. Unlike traditional rifles that are forced to keep certain constraints such as the length of a barrel –  an AR pistol has the freedom to move in terms of parts selection. This means that a gun owner can customize his AR pistol to the exact specifications he wants.

While a short barreled rifle would be the easy trade-off between the two, the BATF requires a tax stamp and a lengthy processing period in order to obtain one.

AR pistols bypass all of that. With some barrels as short as 4″, they definitely are lightweight, maneuverable, and capable of putting rounds on target.

The Bureau of Alcohol, Tobacco, and Firearms recently published their opinion on folks shouldering the pistol braces that typically made an AR pistol a pistol and not a short barreled rifle.  Because of that opinion, it’s now completely legal to shoulder that AR pistol brace — virtually eliminating the need to get the tax stamp and paperwork for a short barreled rifle.

The best aspect to owning an AR pistol is a gun owner’s ability to be ready anytime, anywhere. Whether it’s your trusted trunk gun or it’s a home defense pistol you make accessible, you can feel confident that with an AR pistol, you can equip it and move.

In conclusion, an AR pistol may just be the perfect addition to any gun owner’s arsenal and a fantastic defense choice.

I like ’em and think they’re cool, but don’t own one. I’m not leaving a relatively sensitive, higher dollar gun in my trunk. I have a shotgun and big ol’ Hi-Point .45 in there for that. The rest of the time I carry my 9mm Sig or Ruger.

“Top 7 Reasons Why You Need An AR Pistol”
Sorry I don’t. I buy useful, not the latest greatest that you are selling. Old school revolver guy. Small caliber.
These are the kind that get the gun owners a bad rap.

Another version of the biggest baddest gun ads to sell useless guns. If you can’t carry it it won’t be there when you need it. Grow up America this is just another way to suck out your money. This camoes from a 63 yo who has been carry a long time…Smaller usable revolvers in accurate powers. No need for more as a civialian. With more the anti-gun lawyer you meet after a shooting will paint you as a gun crazy. Not telling you what to buy, Just sayin’…LEO different matter, but unless you are…