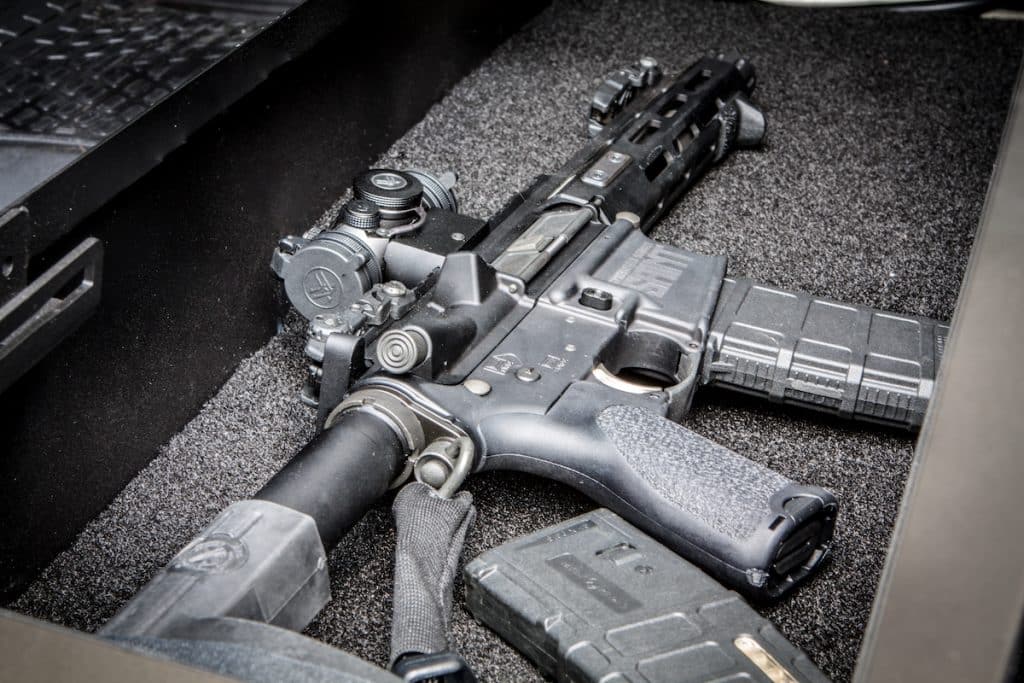 With some idea of what to look at in a truck gun, what are the best choices on the market today and why? As with Part 1, this is a look at long guns, not handguns.

Before even looking at what gun to carry, let’s talk about the gun itself. A few things are universal. It should be:

Now, to start the arguments.

Big fan of pumps here. They are reliable. They are modifiable. The pumps also cycle ammo of varying charges more reliably than an autoloader. They pack more ammo than a double-barrel and are less expensive.

One the most popular shotguns on the planet. Time-tested, combat and law enforcement proved. It comes in the Mariner finish for extreme rust resistance. It is adaptable and modifiable. How adaptable? How about primitive weapons? You can turn it into a muzzleloader.

Also comes in the Mariner finish. Shares the spotlight with the Mossberg and can do everything the Mossberg does, including being a front stuffer, if you can find the barrel assembly. Hastings no longer makes the muzzleloader barrel for the 870.

You can pick up one of these used for $150, which heads the pack for low cost. The drawback is the standard bluing is not as durable as the marine finish on the ones above.

I’ve seen a Model 37 fished out of a pond after a week in the mud and used to hunt dove without cleaning. I’ve bought Model 37s that looked like they went through a war and they still functioned.

Pump rifles, except for the rimfire, are priced above what this list says should be a truck gun. The selection is limited. So, that leaves semi-autos and single shots. The double rifles are far too expensive to be a truck gun unless you live in the African bush.

Autoloaders must be cleaned regularly. If you clean regularly, a lever action makes a good truck gun.

These are cheap, the ammo is everywhere, and they are reliable. If they were not reliable, militias, armies, and insurgents around the world would have something else. With a collapsing or folding stock, they are compact.

I hear your groans and sneers. Yeah, Hi-Point will never win a beauty contest. However, they have a lifetime warranty. Ask the other companies about their warranty. Hi-Points are cheap. They are reliable. As Joe Saxon says of Hi-Point, “You pull the trigger, it goes bang. What more do you want?”

Would I trust one in an emergency? Yes. I have, do and will.

Technically not a rifle, this is a conversion unit for the Glock. Get a Glock 10mm, and you can shoot and .40 S&W and 10 mm. Put the 10mm into the carbine converter, and you have a serious firearm.

Rossi is inexpensive and offers lever and revolver action rifles. The Circuit Judge shoots .45 Colt and 410 shotgun. Load slugs in the 410 and you have a potent close-range weapon.

Since the price of these is coming down, it makes the list, but only with less expensive models. A $1,000 rifle is not a truck gun. A $200 rifle is a truck gun.

As short as you can get and still not need a BATF stamp for 16-inch barrel rifle. The key is keeping it to a reasonable price for a gun that will bounce around in your truck.

Calling this a “new class” because it is new. These short-barreled shotguns have non-removable pistol grips and an overall length of 26 inches or more. Get the full rundown on the BATF statement from the Mossberg website.

Are the Mossberg Shockwave and the Remington Tac-14 truck-worthy guns? In short (har!), yes. The Tac-14 also comes in the Mariner model, which makes it even more ideal for a truck gun. Mossberg, at last look, hasn’t made a full mariner model in the Shockwave yet.

Other companies are also making these pistol-grip short barrel shotguns, but the price puts them out my truck gun range.

If you are carry a gun in your vehicle that can be easily stolen the you should not be carry one. A police style locking rack mounted in the trunk under the package shelf will keep a pump shotgun or AR securely out of the way and out of sight unless someone actually bends over and looks up. A locking steel cable through the action also secures a gun behind a pickup’s rear seat. Handguns can be secured in a lock box bolted through the floor in a center console or with the box cabled under the seat frame bolt. A vehicle is not a gun safe and there is no excuse for leaving an unsecured firearm in a vehicle. I use all these methods in my car and truck. Out of sight and secure.

I carry a handgun everywhere. If I’m on a trip into the woods I’ll grab my Mini-14. If I’m headed into an urban area I’ll take my shotgun.

What do you plan on using your truck (or trunk) gun for? The Shockwave and Tac-14 are next to useless for killing predatory wildlife on your property at any distance. And the idea of accessing and effectively using a long gun in the event of a social disorder borders on fantasy. How are you going to access a gun in your trunk if your vehicle is surrounded by rioters? How are you going to drive out of the danger zone and manipulate your long gun at the same time? And if you’re caught by an active shooter in the mall and escape to reengage him with your long gun, you’ll be running toward the danger zone just about the time the first responding coppers show up, having been dispatched to a “man with a rifle” call. How do you suppose that will end?

Think this through before you make a decision that will end up costing you money, or worse.