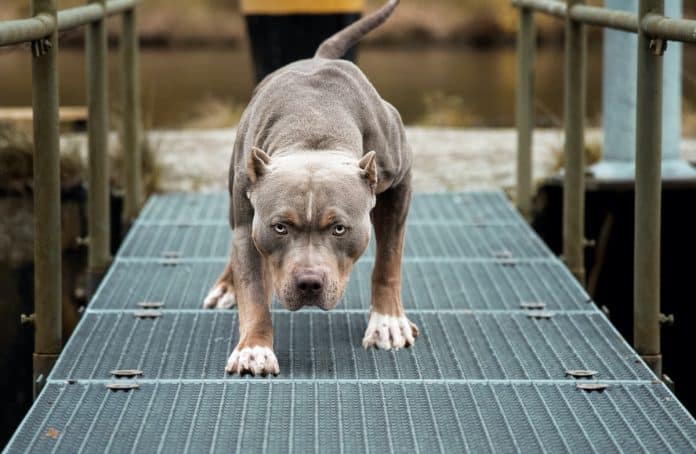 On a recent Cleveland evening, a 31-year-old woman was walking her pit bull when it suddenly, and apparently completely out of character, turned and attacked her. Just in time to see the attack, her boyfriend arrived home and saw her trying in vain to push the dog away from her.

He, of course, quickly ran to help but was also unable to stop the dog’s attack, so he ran to retrieve a gun from the home and shot the dog, killing it. The woman was transported in serious condition to the hospital with multiple puncture wounds and lacerations to her legs, arms, hands, and even to her abdomen with obvious concern for the baby. This story was originally reported by News 5 Cleveland.

Normally using a firearm to stop a dog attack can land you in serious legal trouble. As much as some pet owners consider their pets as part of the family (I get it, I’m a dog lover too), legally they are nothing more than simple property, and using deadly force to protect property is simply against the law. The usual charges could range from discharging a firearm within city limits to reckless endangerment if others happened to be nearby. And, of course, there are potential civil charges that could come for injuring or killing someone’s cherished pet – sorry, family member.

As with all things legal, the circumstances surrounding the incident matter. A good number of dog attacks are actually dog going after another dog, so no real human threat is involved. Those are the ones where using your gun could get you in hot water. Pepper spray is a much better choice for those types of attacks.

This case has extenuating circumstances though in that it’s not just dog on human; it is dog on pregnant woman. And even odder, it’s the woman’s own dog. Given the vulnerability of the victim, a good case should be able to be made that it was a deadly force attack justifying a deadly response.

A very real danger, though, is the possibility of over-penetration and the round further injuring the victim or even bullet fragments ricocheting off of the pavement and causing injury.

This is also a good case for everyday carry actually being carried every day. The delay required to go get the gun from the home gave the dog additional time to do more damage. Can you imagine how long that minute or two must have felt like to the woman being mauled waiting for her boyfriend to return? Had the boyfriend been carrying, how much injury could the girlfriend have been spared? Even a good EDC knife could have been employed to stop the attack more quickly and avoid the gun use entirely.

But then again, who would ever imagine that your own dog could turn on you that viscously?